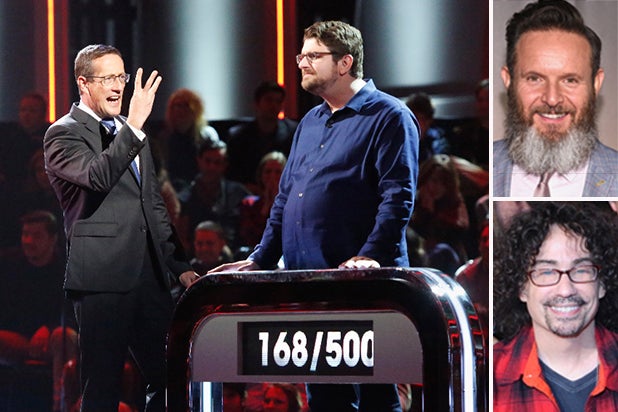 Had “500 Questions” host Richard Quest not taken a second look at a vague email, he likely would not have been hosting the week-long game show event that kickstarted ABC’s summer slate.

The email asked him for his agent’s information. Since he does not have one, however, he let it marinate in his inbox for a few days before realizing that producer “Warner Horizon” is a corporate cousin of his homebase at CNN.

He fired off a response to fulfill a corporate duty, and inadvertently set in motion the path that led him to the Adam-and-Adam of 21st century primetime, Mark Burnett and Mike Darnell. From these two, the show should be the reality TV analog to a Scorsese-Tarantino collaboration.

See video: Larry Wilmore Rips CBS's 'The Briefcase': 'Way to Exploit the Underprivileged for the Sake of Ratings'

Lineage aside, “500 Questions” has been a averaging a 1.06/4 in the key 18-49 demographic and 4.94 million viewers in its three airings this week.  Throughout its seven night run, it has usually beaten one time period competitor (for example, Burnett’s own “Are You Smarter than A Fifth Grader” on Fox on Tuesday) while losing to another (“America’s Got Talent” more than doubled it on NBC while going head-to-head.)

In between flying in an F-16 and catching his own show with friends, the CNN journalist still had time to tackle less than 500 of TheWrap’s own questions ahead of Thursday’s finale.

Quest sounds off on what worked during the quick first season, what didn’t, and any advice that colleague Anderson Cooper gave him on segueing from news to entertainment.

TheWrap: Birthed from Mark Burnett and Mike Darnell, the Adam and Adam of U.S. primetime reality for the past 15 years, this is like being born in to a royal family. How did you get the “500 Questions” gig?

Quest: By chance, by luck, and I nearly didn’t get it at all!

I received an email from Warner Horizon, which makes the show with Burnett asking me who my rep is (I don’t have one!!)

I ignored the email. Then few days later, I finally decided to reply when I thought “Warner Horizon?  That’s part of TimeWarner, like CNN. I might get into trouble for ignoring an exec’s email.”  So I answered.

Burnett had a biblical beard from the winter through most of the spring, emerging fresh faced at the “Survivor” live finale (inset) on May 20. (Getty Images)

What was your first meeting like with Burnett and Darnell? What did they ask you? What did you have to sell them on?

My first meeting was in LA.  I didn’t recognize Mark Burnett with his long beard.  I thought he was a contestant also named Mark. I said to him, “Which Mark are you?”

“Burnett,” he replied.  I thought my number was gone.

Both men have one thing in common: Having decided to give you the job, they let you get on with it.

They gave me the general guidelines and that was that.  No ‘more of this’or ‘less of that.’  They energized when necessary, directed when needed, and recognized there is no point in buying a dog and barking yourself.

Managers of the world, take note

I hear that you came on to the show shortly before production. How much time did you have before shooting and who did you beat out?

It was a fairly recent addition. And that’s all I am going to say on that.

If this partnership did a show like “American Girl Dolls” meets traffic cones, it could get sold and I’d set my DVR. Did you feel the same way going in?

I fully respected their pedigree and previous successes.  But I have also been in this business long enough to know that the viewer is in control, and they have a funny way of deciding what they like — which is why I am so pleased with the way we are getting good numbers and a strong favorable reaction.

To be sure, some of the quiz aficionados may have some gripes about this or that but those have drifted away.  Viewers like to see geniuses flex their brains.  And this is not about the money. I don’t know how many times I have to say this: Yes, people will earn sizable amounts, but “500 Questions” is about intellectual strength and stamina.

The most recent big, network, shiny floor quiz show hosts have been Ryan Seacrest (“Million Second Quiz”), Guy Fieri (“Minute to Win It”) and some of the entertainment/non-game shows like “I Can Do That” (Marlon Wayans) and America’s Got Talent (Nick Cannon). How have you felt about segueing into this peer group?

I have been a TV journalist for many years, so I entered this genre with healthy respect for those who have gone before… watched many of their programs, and realized that I am the newcomer.  I will do it ‘my way’ and hope to stand tall and proud with the results.

Anderson Cooper’s version of “The Mole” on ABC debuted in the first wave of reality shows, in 2001. (Courtesy: Fox Reality Channel)

Way back, your CNN colleague Anderson Cooper hosted “The Mole” on ABC. Did he give you any advice?

A wry smile in the corridor and an honest wish of good luck.

As a journalist, how surprised have you been that some of the geniuses know obscure trivia about rivers or opera, but that they have blind spots in current events? One question that comes to mind straight up asked for the name of Malala, the teenage girl shot by the Taliban who won the Nobel Peace Prize.

I was aghast at that one: I nearly screamed at the contestant,  “How can you know such irrelevant stuff and not know the name of one of the most important people of this century so far?”

But that’s the beauty of the game.  I  think it also speak to how the contestants (many of whom have been on other shows) train for a game show.  They learn the facts that can be used in multiple situations (rivers in Africa, states of Australia, numerous lists of top ten records, hits, artists, decades etc)  because that is the normal cadence of quiz show questions.

What’s connecting with the audience?

The fact that the contestant’s brain is being tested to its maximum against the clock.  You can see it in their faces, they grasp for answers, they make educated rapid fire guesses in the ten seconds, they scrunch their faces as they decide if to play or pass on Battle questions.

Simply put: It was time for a quiz that didn’t pay ridiculous amounts of money for answering questions as easy as, ” Capital of France?”   There is a respect for what these people can do, and my job is simply to make sure they get the best shot they can at doing it.

Possibly some of the rules might need minor tweaking, maybe some of the questions types will need to be looked at.  One thing I know, that sort of decision will be made way way above my pay grade.

At the time of this interview, you are five nights in and two to go, on a scale of 1-500, how happy are you?

400. I am incredibly pleased that the strategy of a buildup, with an event, (it) has worked.  Mark Burnett and Mike Darnell were adamant that this was not a one-night wondershow, that the viewer would become engaged and engrossed, and as the numbers and anecdotal evidence shows, that has worked.

The words I hear again and again are “I’m engrossed in it” “I’m hooked on it, I want to see how they do.”  So why not 500? Because we can always make it better (and I can perhaps talk less!)