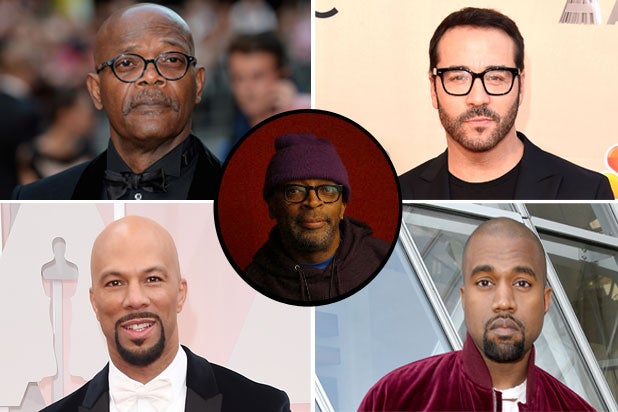 Spike Lee is making his next movie for Amazon Studios and the Oscar-nominated filmmaker is courting Samuel L. Jackson, Jeremy Piven, Common and Kanye West for the ensemble cast of “Chiraq,” multiple individuals familiar with the project have told TheWrap.

Representatives for Common and West did not respond to multiple requests for comment, while a representative for Amazon declined to comment.

Plot details are being kept under wraps, but “Chiraq” became synonymous with Chicago as the city became increasingly plagued by gun violence in recent years.

Piven and West are both from Chicago, and the duo are in talks for the film, though neither has a deal in place yet. Piven’s involvement will depend on his eschedule, as he’s preparing to shoot another season of “Mr. Selfridge.”

A longtime collaborator of Lee’s, “Avengers” star Jackson is expected to cameo in “Chiraq.” The duo previously worked together on “Do the Right Thing” and “Jungle Fever,” among other films. Jackson, who is currently filming Quentin Tarantino‘s “The Hateful Eight,” will soon be seen in “Avengers: Age of Ultron.” He’s repped by ICM Partners and Anonymous Content.

West recently moved from CAA to UTA and he has been looking to increase his profile in the feature world. He previously had a cameo in “Anchorman 2” and he’s currently filming a role in Ben Stiller‘s “Zoolander” sequel.

Piven next stars in the “Entourage” movie, which hits theaters in June. He’s repped by CAA.

Common recently won an Oscar for “Selma” and co-starred in “Run All Night.” He’s also repped by CAA.

“Chiraq” represents a major coup for Amazon, which recently secured Woody Allen to create an original series for the streaming service.