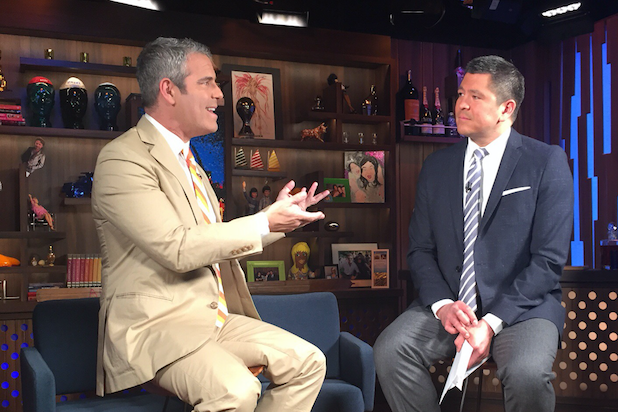 CNBC’s new web series offers viewers a chance to “Binge” on information straight from directors, producers and stars of popular media and entertainment, exploring the intersection of the creative and business sides of the industry.

Host Carl Quintanilla wanted to develop a program that looks at content creators, as opposed to his usual beat: their companies’ stocks. “Binge” is the result.

“Amazon’s market cap versus Netflix … Viacom’s valuation — we do that better than anyone, but we do it all day,” Quintanilla told TheWrap. “The wakeup moment was when Amazon hired Woody Allen. I just thought that was so weird; this studio that had been around for five minutes is employing Woody Allen. How did that happen?”

Dedicated to questions like this, the entire first season was released on Monday and is ready for binging. Excerpts of the interviews will also air on CNBC’s “Squawk Alley.”

Interview subjects “have to be businessmen, they have to be artists. I’m a film junky myself, and I thought, ‘What a fun way to look at Hollywood through a slightly different prism,” Quintanilla said.

Quintanilla says his web series is similar to a conversation most people have at work: “What did you watch over the weekend?” “Binge” simply adds “CNBC’s flavor of, ‘Well, how are you making money at it?'”

Quintanilla, who admits to watching a ton of TV in his free time, mentions “Homeland, “Mad Men,” “Game of Thrones,” “Breaking Bad,” “The Man in the High Castle” and “Catastrophe” as shows he’s binge-watched.

“It feels like the speed is getting turned up on the treadmill because the content is just coming at us so fast. Eventually, we’re all going to have to make some hard choices about what we’re capable of watching,” Quintanilla said. “Thank goodness some of the seasons are staggered. If ‘Homeland’ was on right now, I’m not sure our brains could handle it.”

Quintanilla says he wanted Martin Scorsese as a guest to find out “why he is suddenly synonymous with HBO,” and Steven Spielberg so he could discuss “distribution windows in theatrical releases.”

Scorsese and Spielberg will have to wait until future seasons, but the guest list for season one includes some heavy hitters in their own right.

“We were thrilled to get Grazer,” whom Quintanilla said discusses topics of immediate relevance concerning “how Hollywood has shifted decision-making from one executive to 12 and what that means for him.” He added, “Gary Marshall was also great because he can talk about great, nostalgic sitcom questions. What happened to the catchy TV theme song? He’s a guy who actually has answers for that.”