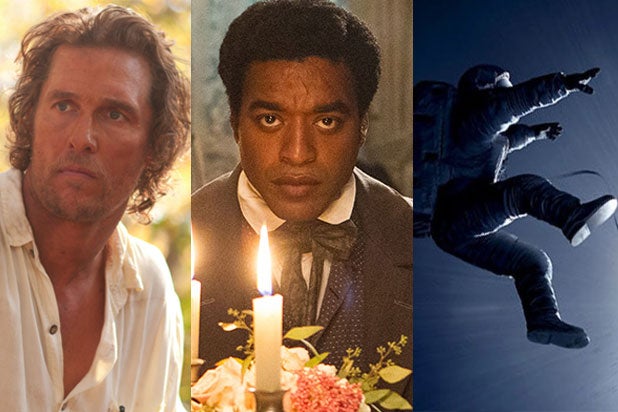 American film is back, so let’s dispense with the idea that the only good, creative work is being done on television.

It might be tempting to dismiss this resurrection of quality as the byproduct of Oscar season, but the truth is that in terms of the big screen, 2013 has been one for the ages. Movies like “Gravity,” “All Is Lost,” “Captain Phillips” and “12 Years a Slave” contain the kind of bravura filmmaking and stirring performances that characterize a golden age of cinema.

Even before the awards race heated up, off-beat works like Woody Allen‘s “Blue Jasmine,” Jeff Nichols’ “Mud” and James Ponsoldt’s “The Spectacular Now” provided respite from the steady stream of tentpole pictures about superheroes.

This revival comes as studios have essentially abandoned mid-budget adult dramas in favor of comic book fantasies, the DVD business has shed billions and specialty divisions have been shuttered or consolidated, as was the case this month with the shotgun marriage of FilmDistrict and Focus Features. But instead of despairing, producers and financiers are finding opportunity.

“It’s always been hard to make quality movies, but the audience for smart, grown up films is still there,” Anthony Bregman, the producer of “Enough Said,” told TheWrap. “If you figure out ways to address them and to distinguish yourself in the marketplace, while being entertaining and artful, they’ll show up in surprising ways.”

Films for this under-served sector are being made through a mixture of innovative financing, tighter budgets, the rise of alternative distribution and a growing understanding that older moviegoers may be the most reliable audience.

Studio slate-pruning has led movie stars and top directors to realize that creative challenges — and keeping a full dance card — require embracing independent financing and filmmaking as never before. That means settling for a different compensation structure. Marc Schipper, chief operating officer at Exclusive Media, said that the company would not have been able to finance “Rush” had director Ron Howard and star Chris Hemsworth not deferred their upfront salary in favor of backend participation, allowing the filmmakers to put more of the racing drama’s $38 million budget onscreen.

“It’s the same model even at a bigger budget as what worked in the indie space,” Schipper said. “You have high-end directors and stars who are now available and their prices have come into line with reality … it’s only been in the past two years that people have really adjusted their expectations.”

Also read: Tom Hanks and Robert Redford Return With a Vengeance After a Lost Decade

Even major studio movies like Sony’s “Captain Phillips” and Warner Bros.’ “Prisoners” were possible because major stars were flexible. The days of $20 million paydays with 20 percent of first dollar grosses may be gone, but these films show that financial sacrifice doesn’t need to come at the expense of quality.

“There’s a recognition on all sides of the equation that if you want to do a risky film you have to share in that risk,” Marc Shmuger, the producer of “The Spectacular Now” and the former co-chairman of Universal, said. “At the same time, the limitations one bumps up against force you to be as resourceful and creative as possible and that can make for exciting filmmaking.”

But cutting salaries isn’t enough to get a quirky film like Spike Jonze’s “Her” or Jeff Nichols’ “Mud” made, even with actors like Joaquin Phoenix and Matthew McConaughey signing on at a fraction of their price. It takes some deep-pocketed investors with a passion for movies. Call them benevolent billionaires.

It’s no accident, for instance, that “Her” and David O. Russell’s upcoming ABSCAM drama “American Hustle” were largely financed by Megan Ellison. The 27-year old daughter of Oracle founder Larry Ellison has been a key supporter of Jonze, Russell and the indie directors who first came to prominence when she was in her formative years. That advocacy has enabled them to maintain their artistic freedom.

Likewise, “Mud” was fully financed by Everest Entertainment, the brainchild of Lisa Maria Falcone, whose husband Philip Falcone has an estimated net worth of $1.1 billion.

“We’d rather take a big bet on something we’re confident in than come in for a small piece,” Tom Heller, an executive producer on “Mud” and an executive at Everest, said. “We don’t come on board unless we fall in love completely with a project.”

“The era when studios were strong supporters of independent film has gone away, but these new financing options have emerged and they’re what’s keeping indie film alive,” said Joe Pichirallo, a former executive with Focus and Fox Searchlight and the chair of NYU’s undergraduate film and television program.

Foundations like the San Francisco Film Society have also played a crucial role in fostering emerging auteurs, providing thousands of dollars and expertise for low-budget projects. Just this year, they provided critical financial support to “Short Term 12” and “Fruitvale Station,” and last year the society threw its weight behind “Beasts of the Southern Wild.”

“It would have certainly taken a lot longer to get these movies made,” Michele Turnure-Salleo, director of the film society’s filmmaker support program, said. “We provided the momentum that accelerated the process.”

The advent of video on demand and digital sales haven’t replaced the financial windfall from DVDs, but they’ve helped offset the losses. Take movies like “Arbitrage,” which have generated more than $10 million on VOD. Ironically, in many cases, cable boxes, the symbol of TV’s golden age, are partly responsible for kicking off this new era of big-screen excellence.

“Premium TV drama has unquestionably become a more original and buzzworthy entertainment platform than the multiplex in recent years,” Stuart Ford, CEO of the indie film financier and foreign sales company IM Global, said. “What a lot of industry outsiders don’t realize is that it’s the upwards spike in domestic VOD values that’s also fueling much of the indie feature film financing.”

And theatrical releases have remained viable thanks to the adult audience; films like “Prisoners,” “Gravity” and “Captain Phillips” show that there’s an unacknowledged opportunity for the movie business to pitch its more challenging fare to the 35 percent of the U.S. population that is part of the “Boomer Generation,” particularly as they enter retirement age.

“It’s not that this audience has been dormant,” said veteran marketing executive Gordon Paddison. “They’ve been busy, but now with more free time and living longer lives, if they are properly marketed to, they’ll make going to the movies a habit again.”