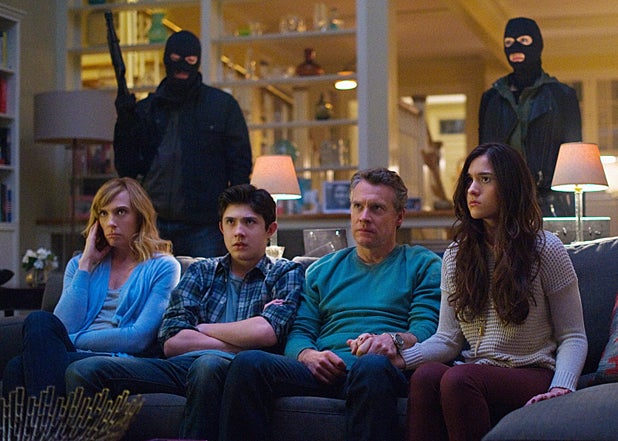 Suspense-filled from the get-go, “Hostages” revolves around a family full of secrets: There’s the husband (Tate Donovan) hiding his business woes and extracurricular activities, the surly daughter (Quinn Shephard) who may have gotten herself knocked up, and the lacrosse-player son (Mateus Ward) caught with a collection for illicit substances.

The only one without an obvious secret is their mother, a surgeon played by Toni Collette, and she inadvertently gets the entire family kidnapped by a rogue FBI agent (a scruff-faced Dylan McDermott) intent on killing the president.

The pilot opens with the doctor explaining how plans to operate on the chief executive. Diffident to a fault, Ellen doesn’t seem to mind that her family missed her big press conference. They express shock that she’s going to cook dinner.

From there the show establishes the various secrets of family members while ably building suspense for the inevitable hostage situation.

Once Agent Duncan Carlisle and his masked crew take the family captive, he makes his demands known: Dr. Sanders is to kill the president when she operates on him.

Duncan, who has mysterious motivations but family issues of his own, clearly expects her to acquiesce to his will. But by the end of the pilot, she shows unexpected steel.

“I don’t give up that easily,” she says, with an enigmatic glance. The show’s marketing campaign suggests more unexpected behavior from her in weeks ahead.

Let’s hope she continues to show some spine. In initial going, Collette’s surgeon comes off as too recessive by half. This is the woman they chose to operate on the president?

As for his motivation, er, rationalization: “Sometimes you have to do a bad thing for a good reason,” Duncan explains.

Another female-friendly political drama following in the success of “Homeland” and “Scandal,” “Hostages” initially plays up Ellen’s family life rather than her career. It even competes against another political-tinged drama – NBC’s new “The Blacklist.”

Produced by Jerry Bruckheimer, “Hostages” is being presented as a 15-episode limited series. If it takes off, CBS and Bruckheimer will no doubt find a way to extend the story.