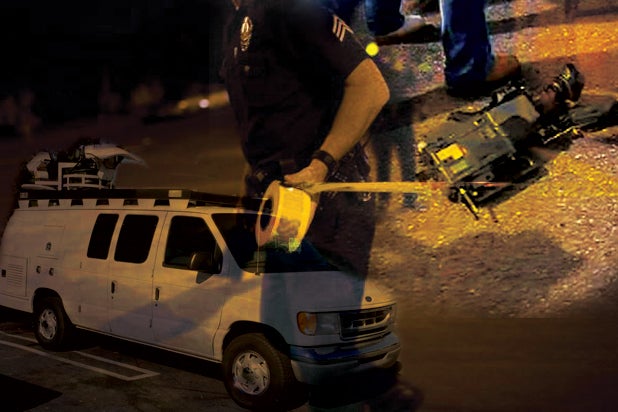 Reporters and photographers have long known about the dangers of working in TV news. But last week’s tragic shooting deaths of WDBJ photographer Adam Ward and reporter Alison Parker in Virginia, have heightened awareness in the broadcasting community about just how vulnerable journalists can be in the field.

In interviews over the past week with three reporters and one photographer working in markets across the U.S., TheWrap has learned that TV news crews face an increasing number of threats as they cover stories in public places.

Gary Johnson, who retired in August, after 38 years as a photographer for KCBS-TV in Los Angeles, told TheWrap he came face-to-face with a man armed with a gun while covering a protest in support of slain Florida teenager Trayvon Martin.

“I was at my truck and an inebriated individual came up to me and presented a firearm and suggested that he wanted my camera,” Johnson said about the incident which occurred in L.A.’s Leimert Park neighborhood. He escaped with his camera and was not hurt.

Other victims have faced more serious outcomes. Several camera crews in the San Francisco Bay Area have recently had their expensive cameras stolen by armed robbers. In July, one photographer was even pistol-whipped by a man wearing a ski mask.

Earlier this year, a photographer from Los Angeles Fox affiliate KTTV was assaulted by a homeless man as he recorded a story with a reporter on Skid Row. Video posted on the station’s website showed that the news crew was not injured, but the camera was destroyed. And in 2011, KABC reporter Leanne Suter was shot with a BB gun on live TV.

Veteran reporter and anchor Al Naipo, who spent 20 years at KTTV, recalled one terrifying encounter a few years ago in the L.A. suburb of Ontario. As he and his photographer waited outside a child endangerment suspect’s home, a man approached them and asked why they were in the neighborhood. After a brief conversation, the man got in his car and did something unexpected.

“He leaned forward in his car and then pulled out a rifle and then pointed it at us,” Naipo recalled. “We ran and he chased us with his rifle.” The news crew fled and alerted police.

That wasn’t Naipo’s only brush with danger. While covering a gang-related shooting near East L.A., he faced another threat. “We had several individuals come up to us, heavily tattooed, apparent gang members who didn’t want us to be there, telling us we weren’t welcomed. One individual actually came up to us and confronted me… He lifted his shirt and there was a knife in his waistband. At that moment, we decided it was probably best to back off.”

“There are a lot of people who have been harassed and interrupted in their work,” said Tompkins, the Poynter Institute’s senior faculty for broadcasting and online. “Part of the problem, it seems to me, is that stations are asking these crews to be live in places where trouble is predictable — after a sporting event, for example, where people come out all emotional and sometimes liquored up.”

As TheWrap previously reported, TV news reporters are frequently heckled by pranksters who jump in front of their cameras and yell explicit taunts during live shots.

One female reporter at a New York City TV station said she’s been harassed so many times, that she has trained herself to constantly keep an eye out for potential attackers, especially during live shots.

“I focus on everything else around me until the moment I have to talk,” said the reporter, who wishes to remain anonymous because she is not authorized to speak to the media. “I’m always looking around… if I have to get out, I’m out. I don’t care. I’ll just run.”

A male reporter, who now works on the West Coast, and also wishes to remain anonymous, said he was almost shot in Detroit in 2011, while covering a vigil for a 5-year-old girl who had been raped, killed and set on fire.

“During the vigil, someone started firing a gun and we all just hit the deck. It was terrifying,” he said. “I was very shaken. There were two other reporters there from other affiliates and we all scattered.”

Luckily, no one was hurt on that occasion.

But almost every reporter and photographer interviewed by TheWrap recalled at least one life-threatening situation.

For many TV journalists, protest rallies with large crowds and assignments in high-crime neighborhoods are the most dangerous, especially late at night. Johnson worked the night shift for years and believes news vans emblazoned with station logos are an added problem.

“They’re rolling circus wagons, rolling billboards, advertising to everybody who we are and what we’re doing, and it really leaves us especially vulnerable because it just advertises our location,” he explained.

According to Johnson, who served as a union shop steward for KCBS, the station has been very vigilant about providing security details when it sends crews into potentially dangerous situations. But even a security guard didn’t deter a man from attacking one of the station’s news crews during a 2012 anti-violence rally in Leimert Park.

“A guy came out of the crowd and cold-cocked the photographer, knocked both he and the reporter to the ground,” Johnson explained. “The photographer broke his collarbone and suffered a concussion as a result because the camera flew up in the air and came back down on his head.”

Johnson said the photographer was injured so badly that he still hasn’t returned to work. KCBS did not return TheWrap’s request for comment on the incident.

Tompkins believes one solution to the violence is for TV stations to offer safety training to reporters, photographers and producers who work in the field.

“My suggestion is, let’s be sure we’re properly training people so that they can know how to properly assess danger and know what to do if they get into a tight spot,” he said.

TheWrap contacted several news directors at different local TV stations, but as of the time of publication, not one returned our requests for comment.

“Stations don’t want to bring any type of negative attention so they don’t want their folks talking to anybody about those things,” he said.

Naipo believes another solution is for producers and managers back at the station to listen to field crews when they express concerns.