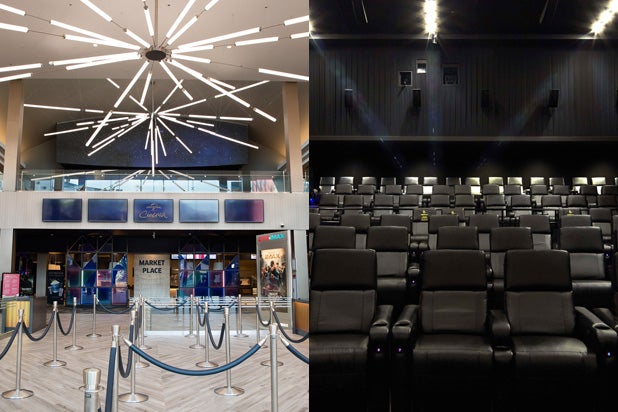 The North American box office grew just two percent last year, as the average person saw less than four movies, according to a recent report from the Motion Picture Association of America. That makes it even more important for theaters to make each visit count, which is why so many of them are moving upscale to create a premium experience — and provide more opportunities to cash in.

And now one major movie studio is pushing that forward even further — by giving every single moviegoer at its headquarters’ cinema something closer to the studio VIP experience.

Universal Studios Hollywood recently revamped the 19-screen AMC multiplex at Universal CityWalk, branding it as its first Universal Cinema. All 18 standard auditoriums got a full makeover with power recliners, except its seven-story IMAX theater (which was just upgraded last year).

Hollywood execs tend to see movies in luxurious screening rooms with plush recliners — some even have those type of facilities in their palatial homes. Universal decided to use that inspiration to give the ticket-buying public a similar experience — even if it meant sacrificing the aggregate number of seats. The 18 renovated theaters seat around 2,000 moviegoers in total, a cozy average of about 111 recliners per auditorium. To make up for that, the approach taken by theaters like Universal Cinema revolves around convincing each viewer to spend more time — and money — at the theater.

To that end, Universal Cinema has an expansive concessions area that includes the standard popcorn and hot dogs, but also offers more robust loaded nachos and its own version of the artery-hardening Southwestern classic, Frito Pie. (The CityWalk outdoor mall the theater is part of has plenty of full-service restaurants, which the theater wouldn’t want to cannibalize business from by offering a fuller slate of entrees.)  There’s an ice cream and coffee and smoothie counter for people who want more than what comes from a standard soda fountain — but for those who think fizzy drinks is an essential part of the American moviegoing experience, the theater has installed multiple Coca-Cola Freestyle machines that allow for more than 100 combinations.

Universal has also added an upstairs 21-and-over lounge with a full bar, which is becoming an increasingly common element in the theater business nationwide. And to tie the new look to its setting, the lobby level has two starburst-shaped chandeliers designed to complement Universal’s space-themed logo.

On the technical side, Universal Cinema is the first laser-multiplex in the United States with the Christie Vive Audio solution, and each auditorium has 40 speakers, which made the sound in the film TheWrap saw at the cinema really seem to be coming from all around. Eleven of the 18 theaters are 3D capable — which is a standard feature for most of today’s blockbusters — and Christie RGB laser projection is in every one. One of the biggest issues with 3D projection is getting enough light, a technician at the cinema told TheWrap, and laser projection technology helps show the most vivid possible 3D picture.

The average ticket price climbed 3 percent last year, exceeding the 1 percent growth in the consumer price index, as the growth of cinemas with dine-in facilities and other luxury features has enabled exhibitors to charge premium prices. That also means theaters aren’t chasing that marginal matinee moviegoer anymore, in favor of those who would splash down north of $20 on a 3D blockbuster.

In the Netflix era, people who just want to watch a movie can do that at home, and it takes more than that to get them to the theater. But most of them don’t have reclining chairs and a smoothie bar.