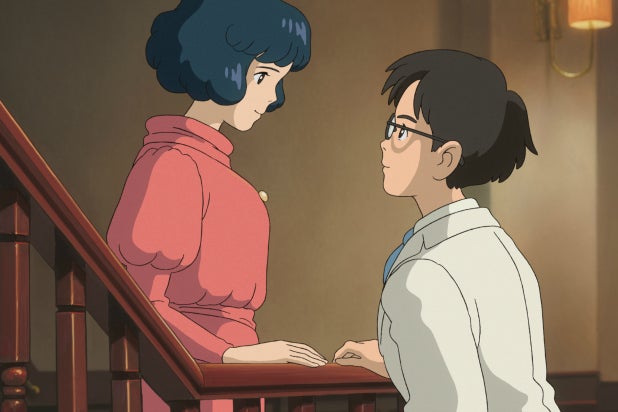 “Airplanes are beautiful dreams” is a phrase reprised throughout Hayao Miyazaki’s “The Wind Rises,” and the same could be said about Miyazaki’s films. Like our dreams, his animated features — which include such modern masterpieces as “Spirited Away,” “Princess Mononoke” and “My Neighbor Totoro,” among others — mix day-to-day concerns with imaginative fantasy that propels us to other times in other worlds.

Miyazaki says “The Wind Rises” will be his last film, and while the animator’s retirement would be a blow to this generation of cinema, at least he’ll be going out on top.

This biopic of aircraft designer Jiro Horikoshi probably counts as Miyazaki’s most realistic film, and one that deals principally with adult rather than younger characters, but it contains many of the master’s trademark touches.

Like his “Laputa: Castle in the Sky” and “Porco Rosso,” it reflects Miyazaki’s lifelong obsession with flight and aircraft. And while “The Wind Rises” has its fanciful touches (in his dreams, Jiro communes with his Italian predecessor, aeronautical engineer Gianni Caproni), it’s perhaps Miyazaki’s only directorial effort that takes place in recognizable human history.

As a child, Jiro (voiced by Hideaki Anno) dreams of becoming a pilot, although he knows that his extreme myopia will keep him out of the cockpit. Instead, he studies engineering, quickly becoming a rising star at Mitsubishi, which hires him right out of school in the late 1920s. He realizes that Japan’s aviation industry is far behind the rest of the world — their runways are covered in grass, and they keep oxen to drag the planes from the factory to the airfield — and that it will take innovative design to catch up.

While he’s dedicated to his work, Jiro finds time to fall in love with Naoko (Miori Takimoto), whom he first met as a young girl when the two of them survived a train accident during 1923’s Great Kantō earthquake. When they are reunited as adults, she is battling tuberculosis, but they decide to marry anyway. (It happens off-screen, but this may be the first Miyazaki movie where actual sex between two characters is ever even implied.)

There have been countless cinematic biographies of authors, painters, sculptors and musicians, but this is one of the few I’ve ever seen that celebrates the imagination and groundbreaking work of engineers. We see Jiro’s excitement over making planes more aerodynamic (there may never again be another film where “flush riveting” is mentioned so frequently or enthusiastically) and his inspiration in shaping a wing like the curvature of a mackerel bone.

There’s a special jolt I get from Miyazaki’s creations; whether it’s a moment of sheer beauty, or a character doing something moving or redemptive or unexpected, it prompts a sharp intake of breath as my eyes suddenly moisten. His landscapes are stunningly gorgeous, yes, but his storytelling and characters always provide hope for better times ahead.

Miyazaki’s films stress perseverance and strength of character and a love of humankind that feel like an oasis in a desert of cynicism.

At least three or four moments in “The Wind Rises” that gave me that special jolt; the voice acting is powerful, and Joe Hisaishi contributes another in his series of legendary scores for the director.

(Note: Disney is releasing the Japanese-language version of “The Wind Rises” in Los Angeles and New York on Nov. 8 for a one-week Oscar qualifying run. The film will open nationwide in Feburary 2014 in an English-dubbed version.)