1. Sam’s Boots Were Made for Walking 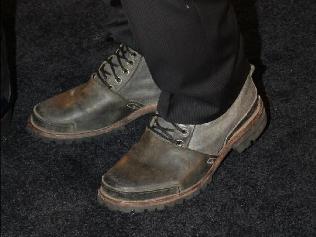 With just a month to go until “Avatar” makes him one of the biggest — and bluest — stars in the movie world, Sam Worthington’s having himself a fun victory tour of his native Australia. This week he was named “Man of the Year” by the Down Under version of GQ magazine and lauded at the Inside Film Awards. Showing he’s keeping it real, Sam wore his “lucky” old workboots — the ones he kept on during the entire “Terminator Salvation” shoot — to both the magazine’s glittering function and the awards show and after-party. When a paparazzi called him on it, the rising star’s response was colorful. “Mate, f—ing ease up, f—ing take it easy, or that’s the last pic you get,” he said as a joke. “They’re f—ing comfortable. Why wouldn’t I wear them?”

2.McG’s Sub Sinks — for Now
A few months back, we fretted that uber-hack McG was making a new blockbuster version of “20,000 Leagues Under the Sea” and suggested he look to cheapie schlocker “30,000 Leagues Under the Sea” for inspiration. Now, it appears the gods — Neptune, Poseidon, Walt Disney execs — have seen the light and pulled the plug on the $150M production. Yes, a script by Michael Chabon may have been interesting, but McG? C’mon, we’re still smarting from what he did — other than give an inkling of Sam Worthington’s potential as “Mad Max” — in “Terminator Salvation”.

And who can blame him? The Brit co-writer-director of “Shaun of the Dead," “Hot Fuzz” and the much anticipated “Scott Pilgrim Vs. the World” is a lovely chap and an avid cinephile. So what the hell was the Times doing ripping off — as in, printing without permission — the heartfelt obituary he wrote for actor Edward Woodward and passing it off as a piece he’d penned for them? Adding insult to injury, they edited the piece sloppily. Follow it here.

4. More Violence! More Suffering!
Ah, test screenings, is there anything they can’t do? “The Lovely Bones” — which I reckon could be shaping up to be the Dark Horse of the Oscar season — is near enough completion that Peter Jackson felt comfortable showing it to a test audience. Their feedback led him to recut the film to include “more violence and suffering” for one particular character. I’m guessing it’s not the film’s narrator, Saorsie Ronan. If it is, well, scrap the preceding Oscar sentiment.

6. Puppet People Brought Down Nixon
This week I chatted with Bert I. Gordon, the writer-director-producer who in the 1950s thrilled a generation of kids with B-grade monster flicks like “Earth Vs. the Spider” and giant-grasshopper movie “Beginning of the End." What’s truly amazing is that his 1958 opus “Attack of the Puppet People” actually played a crucial role in the fall of Richard M. Nixon. True story. 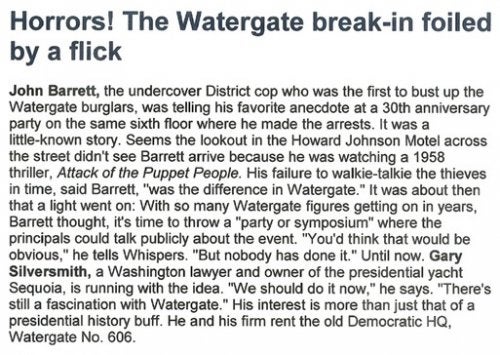 7. Double Steve!
Stephen King’s “Under the Dome” landed on my desk with a thud a week ago. Comparisons to “The Stand” are immediately obvious because this sucker weighs a ton. I’m gonna read it, promise, Steve, but not until I’ve finished your boy’s excellent “Heart-Shaped Box," which I’ve jumped onto immediately after devouring an advance copy of his “Horns." But now news that DreamWorks have snapped up “Dome” rights for a TV miniseries doubles my anticipation. Steves Spielberg and King together? Hell, yeah.

8. Sayonara, Popcorn!
I’ve never been a huge consumer of the buttery, salty cinema treat — namely because once I start, I can’t stop. But news this week that a medium sized popcorn and soda can contain as many calories as THREE QUARTER-POUNDERS TOPPED WITH 12 PATS OF BUTTER has me swearing off the stuff for life. Pass the carrot sticks, kiddo.

9. War Dogs? Pass The Pooper Scooper
Why haven’t movies about Iraq attracted audiences yet? Not enough canines tugging on heartstrings. Thankfully, Warner Bros. will remedy that situation when it brings the story of Nubs, a pooch rescued by an American soldier, to the big screen. Major Brian Dennis’ story of nursing the dog back to health and shipping him home for a reunion has done the news and talk show rounds — and that’s where it belongs, I reckon. I doubt we need six years of hellish conflict “redeemed” and given a happy ending by, say, Owen Wilson staring with puppy eyes into the eyes of his beloved war puppy.

10. The $32M Man … and His Hair
According to his former business manager, Nic Cage spends something like $32M a day buying up Porsches for his genetically engineered iguana army to drive around the life-sized replica of Pompeii he’s built in an underground hangar. Or something. Cage has always been a nut and that’s why we love him, so who cares? Even better, he’s clearly listening to no-one about that hair. Just look at this teaser for “Season of the Witch," which IGN procured.