2. The Green Lantern Up From Down Under
No, say it isn’t so! The weakening US dollar and the strengthening Aussie drongo (only kidding, we also use dollars, just prettier ones) has meant that the crusader caper won’t be shooting in Sydney anymore. Boo! Well, let’s just see how Hollywood likes it when the Down Under Dollar gets so strong it’s actually cheaper to shoot in America than at home! Yes, that’s right, expect studio lots to soon be filled with angsty Australian kitchen-sink auteurs whose projects just happen to now feature a lot of bargain-basement priced A-listers and yard-sale discounted CGI. 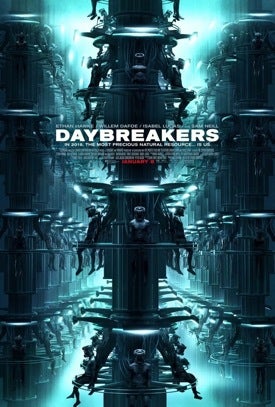 The key art for Aussie brothers the Spierigs’ futuristic vampire flick “Daybreakers” has been doing the rounds this week, to generally thumbs-up reaction. Gotta say I disagree. Is this “Pandorum”? “The Matrix”? “Event Horizon”? I can understand in a crowded fang-tasy film market, that you might want to add more than just vampires, but this comes off as neither fish nor fowl.

4. Japanese Put Down Under on Top
The Japanese know how to do it. Behold the creepy-as-hell local art for “The Descent 2.” Now that’s horror.

5. Dolemite, Baby!
With “Black Dynamite” in the house this weekend, it’s a good time to celebrate all things Blaxploitation – and none moreso than “Godfather Of Rap,” Rudy Ray Moore. It’s the first anniversary of his passing on Monday so, after you’ve seen “Black Dynamite,” why not track down his 1975 bad-movie classic “Dolemite” and throw a house party?

6. Where Were You When the Death Star Fell?
Me, I was seven, and life changed forever after that. For these Stormtroopers, the first anniversary’s a more recent and more haunting affair. College Humor’s comic hit-rate it terrific, but this one’s cleverer than most.

7. Michael Jackson to Bust All Records?
AEG is claiming – and one suspects that Fandango pre-sales and other tracking have solidly underwritten this boast – that “This Is It” will gross $250m in its first five days, shattering all box-office records. A big part of me hopes it’s not true because the “He was our partner in life, now he’s our partner in death” stuff from the company is as gross and ghoulish as the whole enterprise. But if it is, what does that say about us as a society? That we’ll pay to turn the cinema into a global funeral event? That a hundred million people who’d all but forgotten Jackson now worship him simply because he’s dead? 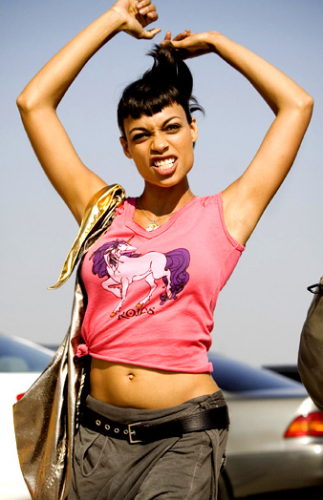 You know what you’re in for when Maxim or EW or People roll out their sexiest list. But British movie magazine Empire (full disclosure: I work for its Australian version) has gotten in on the act. When I saw Rosario Dawson was at number 50 in the ladies’ category, I thought, Wowza, number one’s gonna be The Hotness. And she is, but it’s kinda predictable. Dude-wise, it’s a choice to make you say, Arrrrrh.

9. S— My Dad Says: The Movie
Has there been a movie based on a Twitter personality yet? Ashton Kutcher’s “Spread” don’t count, folks. But this simple series of hilariously profane Tweets that record what Justin’s 73-year-old uber-grump of a father has to say about life, the universe and everything practically begs for a hard-R movie adaptation. With many of the greats – De Niro, Pacino, Hoffman, et al – either in their seventies, or within spitting distance – there’d be a cue to see who could cuss and grumble the best.

"Remember how you used to make fun of me for being bald?…No, I'm not gonna make a joke. I'll let your mirror do that."

"You're being f–king dramatic. You own a TV and an air mattress. That's not exactly what I'd call ‘a lot to lose.’”

"I'm sitting in one of those TGI Friday's places, and everyone looks like they want to shove a shotgun in their mouth."

10. Spacesick Will Make You Feel Better
These are beautiful, an imagined series of 1960s novelization covers based on classic and not-so classic movies, with design influenced by Saul Bass and other minimalist-symbolic artists who’ve rocked the key-art world.