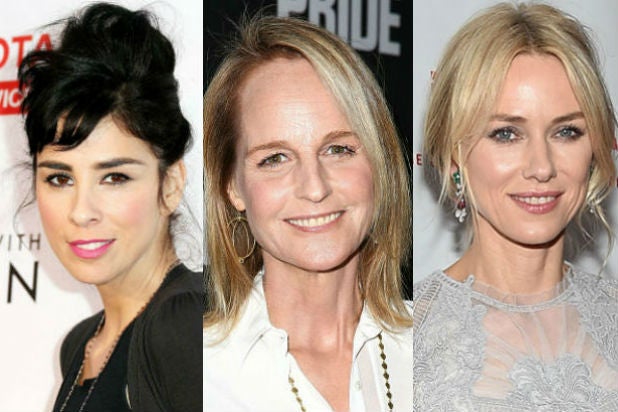 Maggie Gyllenhaal‘s revelation that she “was too old to play the lover of a man who was 55” has reopened the old wounds of Hollywood’s long history of sexism and ageism.

“There are things that are really disappointing about being an actress in Hollywood that surprise me all the time,” she said during an interview for an upcoming issue of TheWrap Magazine. “I’m 37 and I was told recently I was too old to play the lover of a man who was 55. It was astonishing to me. It made me feel bad, and then it made me feel angry, and then it made me laugh.”

Gyllenhaal is not alone, either. TheWrap has compiled a list of actresses who have spoken about the effect the unjust practices have had on the industry and their careers.

“To every woman who gave birth, to every taxpayer and citizen of this nation, we have fought for everybody else’s equal rights. It’s our time to have wage equality once and for all and equal rights for women in the United States of America.” — 2015, Best Supporting Actress Oscar acceptance speech

Also Read: Patricia Arquette Fires Back at Critics: 'Why Aren't You an Advocate for Equality for ALL Women?'

“Once women passed childbearing age they could only be seen as grotesque on some level.” — 2011, Vogue

See video: Meryl Streep Rocks Out in 'Ricki and the Flash' Trailer

“As soon as a woman gets to an age where she has opinions and she’s vital and she’s strong, she’s systematically shamed into hiding under a rock.” — 2013, “Totally Biased with W. Kamau Bell“

“It’s critical that women are at the heart of the international film industry, not just as glamorous icons but as creators, as artists, as decision makers, ensuring that the narrative – of not just half but 51 percent of the world’s population – is fully represented.” – 2015, Acceptance speech for Women in Motion award at Cannes Film Festival

See video: Salma Hayek on Inspiring Change at TheWrap's Power Women Breakfast: 'Live It Instead of Talk About It' (Video)

“[Men are] f–kable forever. They could be 100 with nothing but white spiders coming out [of their privates], but they’re f–kable.” — 2015, “Last F–kable Day” sketch from “Inside Amy Schumer“

“[Thank you] to the audiences who went to see . And perhaps to those in the industry foolishly clinging to the idea female films with women at the center are niche experiences. They are not. Audiences want to see them.” — 2014, Best Actress Oscar acceptance speech.

“I would be given back all my studio muscle provided I used it to beat another woman senseless and get so turned on by that thrashing that I would have to have urgent sex with my 60-year-old male costar whose buttocks were to be played by a gymnast. I’m still deciding whether or not I should take that job.” — 2011, Acceptance speech for Elle Women in Hollywood award

“What are the great movies for younger women where they’re the protagonist [being] made now? You know what I mean? The whole thing — there’s no equal rights amendment. We’re f–ked.” — 2015, HuffPost Live