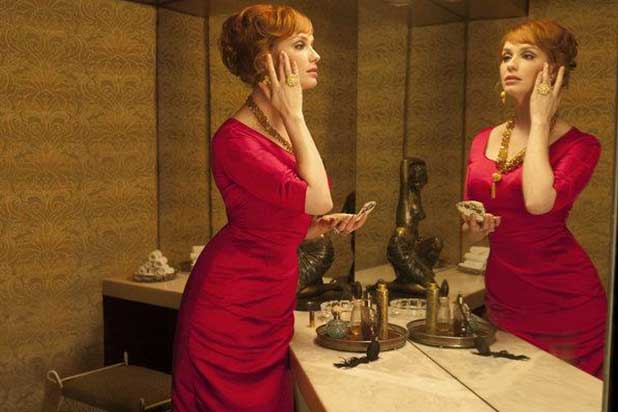 Christina Hendricks is “thrilled” about her Emmy nomination for “Mad Men,” but you won’t catch the 39-year-old actress holding her breath.

Hendricks’ masterful portrayal of the racy and resilient Joan Harris Holloway in AMC’s critically acclaimed period drama has earned her five straight, but so far none of those nominations has netted her a trophy. In fact, despite the show winning an unprecedented four Outstanding Drama Series Emmys in a row, the actors and actresses on “Mad Men” are batting an unfathomable zero for 28 when it comes to individual accolades — not a single one of them has emerged victorious.

When TheWrap spoke with Hendricks Wednesday she admitted the cast had joked about the “‘Mad Men’ curse” before, but the charming actress also figures the streak has to end. Eventually.

Unfortunately, the series wrapped three weeks ago and time is running out.

But with co-star Jon Hamm (Don Draper) and guest star Robert Morse (Bertram Cooper) also nominated this year and a whole mini-season still set to run in 2015, the future and present both hold promise.

Especially considering how far Hendricks’ character has come since the series began. She started off as the office’s head of secretaries, but has since maneuvered herself into being named a junior partner at the Sterling Cooper Draper Pryce advertising firm. Will her skillful ascent up the corporate ladder finally help her win the award for Outstanding Supporting Actress?

With the countdown to this year’s show winding down, she spoke to us about her character’s growth as the series has evolved and, in doing so, made an excellent case for why “Mad Men” deserves to win.

TheWrap: You’re nominated for Outstanding Supporting Actress in a Drama Series for the fifth year in a row. You haven’t won yet. What’s up with that? You should be winning. Why aren’t you winning?
Christina Hendricks: Gosh, there are so many amazing people and so many amazing performances each year. What do you do? You do your best, and you’re thrilled to be talked about, thought about in that group. What can I say? Five times is a pretty nice thing.

Do you think this is your year?
I never think it’s my year. We joke we’ve got the “Mad Men” curse — none of us has ever won. One of us has to break it at some point, right?

Did you prepare a speech?
I’ve never had a speech prepared. Of course you think of things in your head. You know last year, when I didn’t win again? I called Matt Weiner and I said ‘You know what, I had all these wonderful things I wanted to say to you, So why don’t I just say them to you right now on the phone? I don’t have to wait to tell you how thankful I am and all the great things you’ve done,’ so I just called him and told him.

If you had to cast a vote for another actress in your category, who would it go to?
That sounds like a loaded question!

It was. If you can’t pick, you can’t pick. But maybe you prefer one of those shows…
I was just talking to my friend about the extraordinary performance Anna Gunn [of “Breaking Bad”] gave this season — I got goosebumps talking about it. She’s just amazing. They all are. They all are.

Are you a huge “Breaking Bad” fan?
Yes, of course. I just love that show so much. I think they’re all phenomenal.

Did you watch it every week or binge watch it on Netflix?
With “Breaking Bad” it was a weekly basis. I was always like, “Is it on yet? Is it on yet?” I was pretty addicted to that show.

How would you describe “Mad Men” to someone who has been living under a rock these past 7 seasons and might be tuning in for the first time right now.
It’s a very adult, intelligent drama about an advertising agency in the 1960s that really focuses on the characters and their relationships.

How has it evolved since Season 1?
We really stick to a chronological experience. We’ve done a beautiful job of remaining accurate to the times and also staying accurate to the show. It’s not just about what’s going on around you; it’s not just about the 1960s all the time. You’re very aware of where you are politically and socially, yet you’re watching these characters we’ve known from the beginning have children, get divorces, get married, have affairs, rise in the ranks of the work place. It has progressed in a very natural way.

How about your character Joan? Are there huge differences between who she was when the show started and who she’s become?
I think there are huge differences. [Series creator, executive producer and frequent writer, director] Matt [Weiner] writes these characters that aren’t stereotypes or the epitome of something, they seem real because they seem to learn from their mistakes, or make the same mistakes, or grow. It seems like they have an actual life. Joan is certainly one of them. I think she’s grown the most, next to Peggy [Olsen, played by Elisabeth Moss.] She’s learned a lot from her life experiences.

Is this the Golden Age of television?
It’s a really special time, I think the projects out there are super exciting, More exciting than they were ten years ago when I started “Mad Men.” It’s encouraging to finish a show and think about all of the shows I love watching and think, “these are great shows, this would be exciting to work on.”

Look forward to part two of Christina Hendricks‘ conversation with TheWrap next week. The 66th annual Emmy Awards will be held on Monday, Aug. 25 at 8 ET/5 PT.