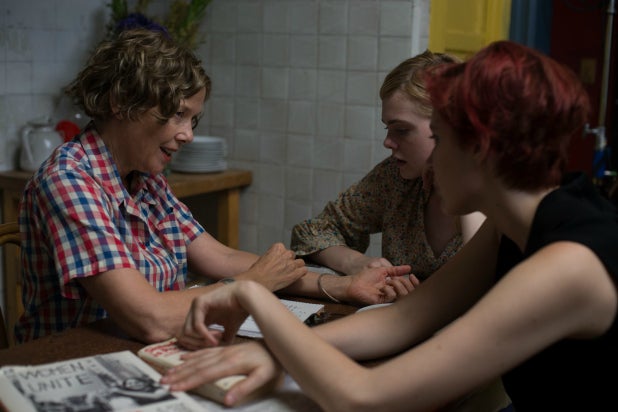 Mike Mills’s second feature “Beginners,” which won a well-deserved best supporting actor Oscar for Christopher Plummer, was based on Mills’s own father coming out of the closet as a gay man late in life. Now with “20th Century Women” the director pays tribute to his mother, and the result is much more complex and exploratory than “Beginners” which, for all its charm, felt a little thin.

“20th Century Women” is set mainly in Santa Barbara in 1979, and the five main characters eventually take turns narrating. There is a sense sometimes that Mills is leaning on Wes Anderson-cribbed static shots of objects being described in a twee way, especially in the opening scenes, but Mills’s strength as a writer of dialogue and his empathy for his characters eventually makes “20th Century Women” come to life as his players interact with each other.

Annette Bening plays Dorothea Fields, the character based on Mills’s mother, a single lady in her mid-fifties who smokes too much and seems to have resigned herself to being a little sad and a little lonely as she watches her teen son Jamie (Lucas Jade Zumann) begin to experiment with life. Dorothea has taken in a roomer named Abbie (Greta Gerwig), a redhead who is recovering from cervical cancer, and the easy-going handyman William (Billy Crudup) is often in the house, which is in need of repairs. The fifth main character is Julie (Elle Fanning), a sexually experienced girl who keeps platonically sleeping over with Jamie.

Also Read: 'Birth of a Nation' Is a 'Powerfully Affecting Film' That 'Deserves to Be Seen,' Critics Praise

This is a movie where the two male characters are basically passive while the three female characters fight to define themselves and what their lives should be. In the first scenes, Bening seems a bit too hyper-conscious, as if she is over-thinking each of her moments, but by the middle of the movie she has started to hold back, which results in several scenes of considerable emotional power.

At the other end of the acting spectrum, the far more naturalistic Gerwig doesn’t seem to be doing enough in her own first scenes, but she gradually starts to push herself further than she ever has in a movie before, until in one scene Abbie’s eyes are so red from crying that they match her hair. Crudup, who has been playing mainly character parts in recent years, revives his late-1990s gentle-stud persona for this movie, and it’s been so long since he did this characterization that it feels new again.

Since the story is set in the late 1970s, the characters do a lot of explaining of their feelings, and this pays off in the scene where Abbie confronts Dorothea about her life choices. But there is a structural problem with the script that starts to make “20th Century Women” begin to collapse in on itself just when it has started to bloom and expand. Toward the end of this movie, there are far too many scenes where Dorothea is confronted by various characters.

A scene where a co-worker asks Dorothea on a date is one of Bening’s best because she turns her emotional temperature as high and then as low as it will go in a matter of moments, but this transition is most effective when we first see it. Mills has Bening playing very similar scenes one after another where Dorothea feels put down or intimidated or insulted, and there’s only so much Bening can do to keep them from feeling repetitive.

But “20th Century Women” mainly overcomes its flaws through the sheer imaginative sensitivity of Mills’s writing. There is an accumulation of convincing character detail here that winds up being very moving in some of the later scenes between Dorothea and Jamie. “You get to see him out in the world as a person,” Dorothea sadly tells Abbie at one point, speaking of her son. “I never will.”

Bening conveys that being a mother is often about being a disappointed wooer who is always having to absorb insults both intended and unintended, as when Jamie reads Dorothea a feminist text about invisible older women, and she has to accept this as the way he sees her. What’s so painful about this scene is that Dorothea knows that the text is relevant to her life, but she is humiliated that her son felt the need to bring this to her attention.

The way that Bening smiles and tries to project calm here is extremely touching, and this nearly makes up for the fact that “20th Century Women,” like many closely autobiographical stories, finally ends with a series of statements about what happened to these characters. Those revelations all feel arbitrary, the way that life so often is, whereas fiction doesn’t have to be.