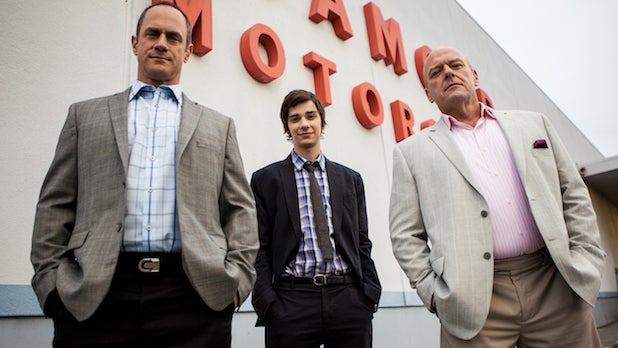 Joel Surnow‘s directorial debut, “Small Time,” drives into select theaters Friday. The sweet, coming-of-age tale stars Christopher Meloni as a struggling car salesman and Devon Bostick as his son, who is eager to join the family business despite his mother’s wishes that he attend college. Dean Norris of “Breaking Bad” fame co-stars as Meloni’s business partner and a surrogate uncle of sorts to Bostick’s character.

Surnow is a veteran TV scribe who got his start writing for “St. Elsewhere,” “The Equalizer,” “Miami Vice,” “The Commish” and “La Femme Nikita.” More recently, he’s known for executive producing  “The Kennedys” and “24,” the latter of which returns to Fox next month.

Surnow spoke to TheWrap in advance of Anchor Bay’s release of “Small Time.”

So where did this project originate?
You have to go back to 1976, when the first draft was written. I had just graduated from UCLA. My father had a partner who was this larger-than-life, old-time New Yorker and the two of them used to do all those shtick things in the movie. So I wrote a version of this in 1976 with Randy Wallace, who tragically died three months after we finished writing the script in September.

Why did you decide to dig the script out of the drawer and revisit it?
I visited it on and off, but virtually 35 years passed. I had finished “The Kennedys” and wanted to do something I could own again. “Small Time” was like a character in my life so I always referred back to it. I was inspired at the time, but I wasn’t inspired now. So I started with a new story, using the same characters, and rewrote the script. It was a collaboration between a 21-year-old and a 55-year-old who was the same person.

Can you describe the casting process?
Well, the script got nice attention from people, but it was a deferred salary situation and everyone knew. I was raising money and putting my own in. I started working with Marcia Ross — who was head of casting at Paramount for 18 years. We sat down and started thinking about leading men who were a little bit older and could have a college-aged kid. Chris Meloni really responded to it. He had left 15-16 straight seasons of TV, between “Oz” and “Law & Order: SVU,” so he was looking to do something like this. And as soon as I thought about Dean [Norris], there was nobody else I could think of.

What about the rest of the cast?
I’ll admit, I wasn’t thinking about Bridget [Moynahan] for the Barbara part, but I got acquainted with her and she got it. Part of it is just getting the look and age right, and the combination of people. But for this movie, it was all about the kid. It was like “Little Miss Sunshine” — you can have great actors but you still need a kid. So we started reading a ton of actors, and when Devon [Bostick] came in, he blew us out the room. My wife Colleen, who is one of the executive producers, looked at me and Marcia, and it was clear he’d knocked us out. His audition tape wasn’t far from what ended up in the film. He just had an unerring instinct about what that kid needed to be and he was unafraid of showing the emotion. His are some of the best scenes in the movie.

What’s the biggest challenge of making a low-budget period movie like this?
Well it’s a car movie, so the biggest challenge was money. When you don’t have unlimited funds, you’re working scene-by-scene to make everything right. You’re begging and borrowing and counting on a lot of people to come through for you. We decided to make it a generic past, so we didn’t put a year in there. There are cars from the ’60s and ’70s, as well as the late ’80s. It’s in the past but it doesn’t matter what year. It’s funny, there are still parts of Los Angeles that look vintage. There were a lot of locations that we had to cherry-pick properly. We kept the wardrobe generic, but the phones are all over the map. With the music and general vibe, we kept it to a spirit rather than [a] specific time and place. We shot a lot in Covina, and it could be 1968 if you’re on the right street.

Were there any songs you wanted to use but couldn’t afford?
There was a Jurassic 5 song we liked that we cut the picture to, though it was a ’90s song. I was really happy with all the songs, but a few would be different if we had unlimited funds. I’m glad we got the Jimmy McGriff song, “The Bird,” which we used at the beginning and the end. There’s a real ’60s West Coast jazz feel to it.

This film is semi-autobiographical, so which parts were based on your real life?
My parents weren’t divorced, but I did work for my father. The speech Bridget gives about hearing [her husband’s] steps come up the stairs every night, wondering if he made a sale — that came right out of her mouth. He’d come home around 6:30 p.m. and if he had a smile it was a great night. If he went straight to his room without saying anything, it was not a great night and if there were some of those in a row, you felt it. That’s the life of a salesman. No sale means no money, which means no food. Eventually, I quit when my dad didn’t want me to, so the movie was a quilt of fiction and non-fiction.

Was there ever a discussion about doing the festival circuit?
We didn’t want to go on the festival circuit. Instead, we went right to distributors. Anchor Bay liked it right away. They had success with a similar movie called “City Island.” Kevin Kasha loved the movie and we fell into business with them. They were going to release it last fall, but with every aspect of the business changing at warp speed, they felt day-and-date was the best way to go and that takes more time.

What’s the biggest challenge indie films like “Small Time” are facing today?
It used to be that it was hard to get films made. Now, it’s not hard, but it’s hard to get films seen. In a world of so much product, how do you get out of the clutter? We’re trying to use social media to find different ways to market the film. Devon became our de-facto head of social media marketing, doing outside-the-box stuff. He’s got young actor friends, like Aimee Teegarden and Emily Osment, and they shot a couple scenes from the movie — but they did it funny. So the poker scene in the movie now features five young actresses. They’re going to have a contest on indi.com — a fairly new site where people can post their work, like auditions and music — where you can recreate your own scene from “Small Time.” There are a few prizes, including a 15-minute Skype call from Marcia and [talent manager] John Carrabino. We’re trying to make something small into something bigger. This is the world we live in now. It’s a completely different way of marketing films from two years ago.

Finally, can you tell us anything about “24: Live Another Day?”
The real-time format remains. It gives the show energy. These have been hard-lived years for Jack and Chloe. That show was right at the forefront of binge TV watching.

“Small Time” opens theatrically in 14 cities on Friday, as well as on VOD and iTunes. Watch the trailer below.