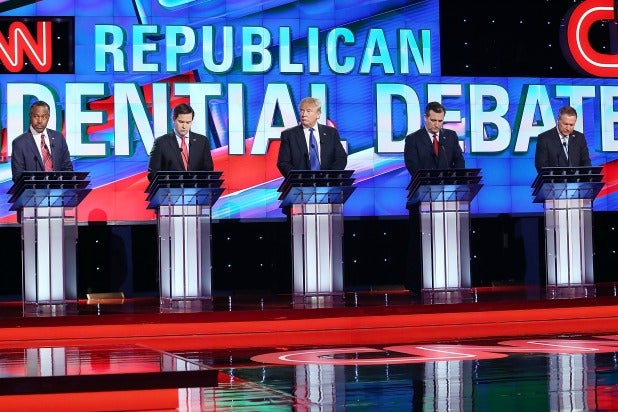 The CNN Republican Presidential debate got heated quickly Thursday night, with Marco Rubio and Ted Cruz itching to go after Donald Trump ever since he dominated the Nevada caucus on Tuesday.

They did not disappoint.

CNN’s Wolf Blitzer moderated the debate, which was expected to nab high ratings for the network. CNN’s first GOP debate last September was the most-watched program ever on the network, averaging 23.1 million total viewers.

Here are five key moments and takeaways from the podium in Houston, Texas.

1. Trump: I can’t release my taxes because I’m being audited
No surprise that this topic came up after Mitt Romney suggested Trump’s records could contain “a bombshell.”

“For many years, I’ve been audited every year … I can’t do it until the audit is finished,” Trump said before pointing out that Romney didn’t release his taxes until September 2012. “Mitt Romney looked like a fool when he delayed and delayed and delayed.”

Romney responded during the debate via Twitter, saying Trump doesn’t have a “legit reason.” Rubio said he would release his taxes soon.

2. Trump and Rubio battle all night
The first question of the night centered on immigration, kicking off the Rubio-Trump beef:

“A lot of theses positions that he is now taking are new to him,” Rubio said of Trump, who fired back.

“I’m the only one on this stage that’s hired people,” Trump said to Rubio. “I’ve hired tens of thousands of people. You haven’t hired one person in your life.”

Eventually they moved on to the wall.

The wall “just got 10 feet taller,” Trump said when responding to criticism from former Mexican President Vicente Fox. “Mexico will pay for the wall,” he continued. “It’s a small portion of the money we lose and the deficits we have with Mexico.”

Naturally, Rubio chimed in: “If he builds the wall the way he built Trump Tower, he’ll be using illegal immigration to build it.”

3. And so do Trump and Cruz
Cruz wasn’t as aggressive early as Rubio, but he threw some zingers at Trump too.

“This is a man who for 40 years has given money to Jimmy to Joe Biden, to Hillary Clinton, to Chuck Schumer, to Harry Reid,” Cruz said. “Nobody who supports far-left liberal Democrats who are fighting for judicial activists can possibly care about having principled constitutionalists on the court.”

Trump, clearly irate, responded: “You don’t have one Republican senator backing you.”

The frontrunner then got personal.

“You don’t have the endorsement of one Republican senator and you work with these people. You should be ashamed of yourself,” Trump said, before calling Cruz a “basket case.”

They manage to agree on one thing, when Trump told Cruz, “If I can’t beat Hillary, you’re really going to get killed.”

4. Ben Carson and John Kasich are officially irrelevant
At one point, Carson literally asked “Can somebody attack me please?” When he did speak, it was mostly to complain about not speaking enough.

Carson at least managed to create a memorable line that will be used in memes for years. He sent Twitter into frenzy by using the term “the fruit salad of their life” as he reflected on potential Supreme Court nominations.

Trump even said it was unfair because Carson and Kasich “weren’t asked that many questions” following the debate.

5. The candidates aren’t siding with Apple
Everyone on stage seems to agree that Apple should help the FBI unlock the now-infamous iPhone of one of the San Bernardino shooters.

Carson finally got a chance to speak, saying Apple is “encouraging chaos in our system.” This was also the highlight of the night for Kasich, according to NBC’s Chuck Todd. The Ohio governor used the question as an opportunity to reiterate that the next POTUS should be a governor.

Cruz and Rubio agreed that Apple should unlock the phone before Trump eventually ended the debate by saying he knows politicians.

“Nobody knows politicians better than I do,” Trump said. “All talk, no action. I will get it done. Politicians won’t get it done. We will make America great again.”