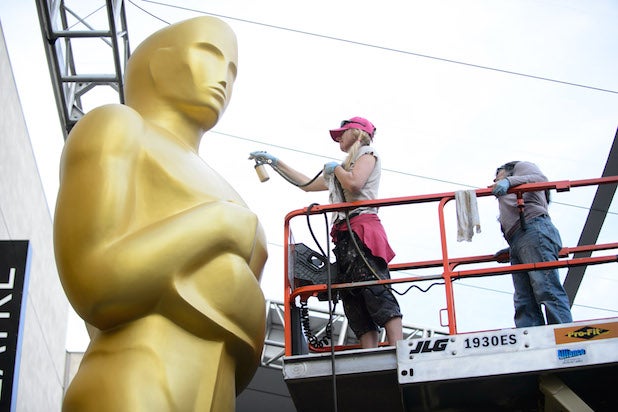 Conventional wisdom says that this year’s Best Picture race will be a nail-biter down to the moment the final envelope is opened on the stage of the Dolby Theatre on Sunday. And that’s probably true — but that doesn’t mean that we won’t get a few hints from things that happen earlier in the show.

So here are five categories that could tip us off early as to what movie will be the Best Picture winner.

If “The Revenant” wins, it’ll be slightly less convincing — after all, that’s the kind of big, muscular movie that often wins in the category. But the victory would definitely point toward a likely best-pic win.

And if “Mad Max” wins film editing, as most pundits expect, or if “Star Wars” does, it won’t really tell us anything.

2. Best Sound Mixing and Best Sound Editing
These are two categories where “The Revenant” has a chance to demonstrate wide-ranging support. In the same way that “The Hurt Locker” beating “Avatar” in these two categories in 2010 clearly tipped the Academy’s hand early in that show, a “Revenant” sweep of these categories would be a significant indicator.

If “The Revenant” wins for mixing but not editing, it’ll be good for the film but not wholly convincing; if “Mad Max” or “Star Wars” wins both, it’ll be a sign that maybe “The Revenant” doesn’t have quite as much strength as we think.

3. Best Visual Effects
A trio of Best Picture nominees are competing in this category, “Mad Max,” “The Martian” and “The Revenant,” but the last of those is the one that could get a big boost. If “Revenant” can beat “Mad Max” and “Star Wars” for its one big VFX scene — the bear attack on Leonardo DiCaprio — it’ll really show that the Academy loves the movie.

Also Read: 'The Revenant' Will Win Best Picture at Oscars ... According to YouTube Trailer Views

4. Best Adapted Screenplay and Best Original Screenplay
These categories can’t really help any of the nominees too much, but they can hurt. “The Big Short” is expected to win the former category and “Spotlight” is favored in the latter; if either one of them is upset by something else, it’ll be a real sign that that film is essentially out of the running in the Best Picture race.

5. Best Director
It’s no secret that Best Director correlates with Best Picture almost all the time, but this year is an unusual situation. There have been two picture/director splits in the last three years — and with the two categories counting votes using different systems (preferential for Best Picture, a straight count for Best Director), it’s possible there could be another.

So if George Miller wins for “Mad Max: Fury Road,” expect a picture/director split. If Alejandro G. Inarritu wins for “The Revenant,” his film is in good shape to be the Best Picture winner, but it’s not yet a lock — “The Big Short” or “Spotlight” could still sneak in and take that prize.

But if Adam McKay wins for “The Big Short” or Tom McCarthy wins for “Spotlight” (or, in a huge shocker, Lenny Abrahamson wins for “Room”), the winning director’s film is all but guaranteed to win the big one.

Yes, those are a lot of ifs. But in a year this close and competitive, you look for all the clues you can find. And the Oscar show will probably offer a few of those clues before the final envelope is opened on Sunday.

Seventeen years ago, Streiber became the first photographer granted full access to the Academy’s show and rehearsals. These images are from “Oscar Revealed,” an exhibition that ran in 2016 at Smashbox Studios in Culver City