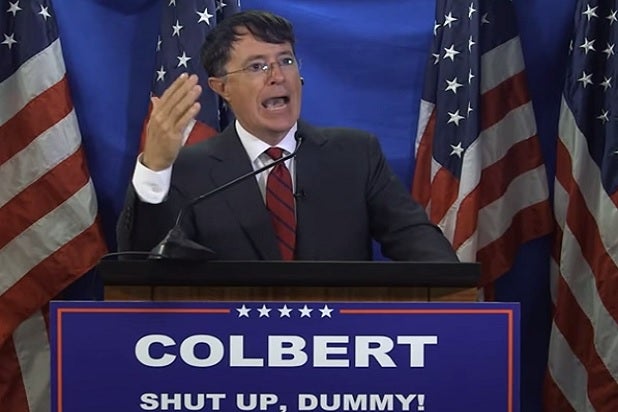 Between the conclusion of “The Colbert Report” last year and his “Late Show” debut, Stephen Colbert has been keeping himself in the public’s attention with a steady stream of teasers and promos.

The new version of the CBS late night talk show will debut with a supersized episode on Tuesday, Sept. 8 at 11:35 p.m. It will run until 12:44 a.m. George Clooney and Republican presidential candidate Jeb Bush will appear as guests.

From a Donald Trump parody to a surprise Mitt Romney cameo, TheWrap has rounded up five of the former “Colbert Report” host’s best promos below:

Also read: 5 of Stephen Colbert's Best Out of Character Moments Prior to 'Late Show' Takeover (Videos)

Former presidential candidate Mitt Romney made a surprise cameo in one of Colbert’s “Late Show” TV spots. “Where are my pancakes?,” the confused politician asks. “I was told there’d be pancakes.”

Colbert took a page out of Donald Trump’s playbook when he announced he was making an announcement in June. “Donald’s Presidential campaign has inspired me, Stephen Colbert, to announce that I will still be hosting ‘The Late Show’ on CBS,” he said.

“Good news, I still exist,” Colbert says in the first video uploaded to the “Late Show” YouTube page in June. The comedian shaves off his hiatus beard, sporting new looks including “The Anti-Hitler” and “The Amish” before returning to his familiar, clean-shaven face.

In a five-part series, Colbert sits down for lunch to better get to know his viewers, but ends up embroiled in a controversy involving a bag of money and the U.S. Fish & Wildlife Service.

“Stephen Gives 20 for the Troops”

After receiving a challenge from Jon Oliver, Colbert showed off his upper body strength and impressive lung capacity by doing 20 push-ups for the #GiveThem20 social campaign to help veterans transition into civilian life.