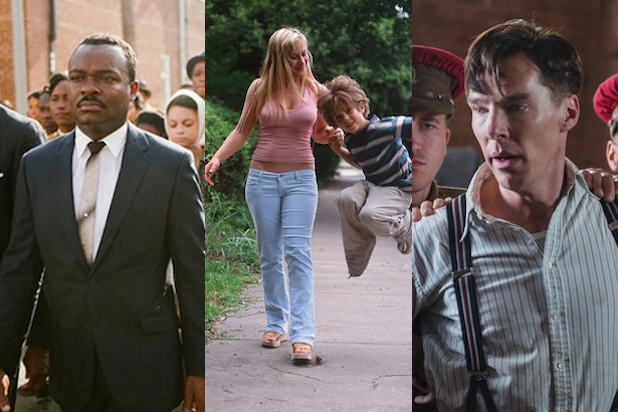 For the next nine days, Oscar voters can cast their ballots to choose the nominees for the 67th Academy Awards.

That’s nine days for the oddest, most unsettled Oscar race in years to start making sense — but from the looks of things, it’s going to take the nominations themselves to bring a small amount of clarity to a year of few sure things, lots of question marks and no real frontrunners.

The last week has seen a number of contenders finally open in theaters, including “Selma,” “Unbroken,” “American Sniper,” “Into the Woods” and “Big Eyes.” This week, “A Most Violent Year” and the foreign-language heavyweight “Leviathan” will come in under the wire and join them.

It’s also seen attacks on “Selma” and “The Imitation Game” — attacks that, given the timing, have been interpreted in some corners as the beginning of dirty campaigning.

So here are five questions that loom as voters consider their options.

Could the charges of inaccuracy hurt “Selma?”
Ava DuVernay’s “Selma” has been well-received since it had its sneak preview at the AFI Fest, and it’s considered to be in the top echelon of Best Picture contenders. But in the past week, it’s taken a few potshots from critics who say it does an injustice to President Lyndon Baines Johnson, who’s portrayed as trying to delay Martin Luther King’s push for voting rights in favor of advancing his War on Poverty agenda.

The most vocal complaint came in the Washington Post, where former LBJ aide Joseph A. Califano Jr. began an op-ed piece with the line “What’s wrong with Hollywood?” and said the filmmakers “fill[ed] the screen with falsehoods” about the MLK-LBJ relationship and concluded, strangely, “The movie should be ruled out this Christmas and during the ensuing awards season.”

Attacks from Washington, D.C., helped cripple Kathryn Bigelow’s “Zero Dark Thirty” two years ago, aided by Bigelow’s and Sony Pictures’ initial silence in the face of charges that it distorted the role of torture in the search for Osama bin Laden. But DuVernay didn’t make the mistake of inaction: Instead, the director quickly took to Twitter to answer Califano’s charges, foremost among them his contention that the action in Selma “was LBJ’s idea.”

“Notion that Selma was LBJ’s idea is jaw dropping and offensive to SNCC, SCLC and black citizens who made it so,” she wrote, referring to two key civil rights organizations, the Student Nonviolent Coordinating Committee and the Southern Christian Leadership Conference.

Also read: ‘Selma’ Director Ava DuVernay on the One Star Who Turned the Film Down: ‘She Did Not Want to Do It’

DuVernay also tweeted a link to an in-depth 2013 New Yorker account of the march from Selma to Montgomery that supports the film’s telling of the story in almost all respects.

In the end, Califano probably weakened his own argument — and gave DuVernay ammunition — by taking a phone conversation in which LBJ told King to “find the worst condition [of voter suppression] that you run into in Alabama, Mississippi or Louisiana or South Carolina … and get it on television,” and treating that as proof that the King-led march from Selma to Montgomery was the president’s idea.

Others who have studied the historical record suggest that “Selma” may downplay LBJ’s contribution and make his relationship with King more adversarial than it really was. But DuVernay’s quick response and the way in which the events depicted in “Selma” are being echoed in protests across the country these days mean the film will likely remain unhurt in the eyes of most voters — that is, too resonant to be harmed by these charges.

How about “The Imitation Game?”
A couple of days after Califano went after “Selma,” another top contender came under fire in another prominent East Coast media outlet. Writing in the New York Review of Books, Christian Caryl ripped into “The Imitation Game,” saying it completely distorted the story of British mathematician and code-breaker Alan Turing, who broke Germany’s Enigma code in World War II and was later prosecuted for homosexual acts.

Caryl, an author, senior fellow at the Legatum Institute and editor of Foreign Policy’s Democracy Lab website, compared the story told in the film with two books about Turing: Andrew Hodges’ 1983 biography “Alan Turing: The Enigma” (which has been reissued with a movie still on its cover) and Jack Copeland’s more recent “Turing: Pioneer of the Information Age.”

“The movie … represents a bizarre departure from the historical record,” he writes, in an extensive piece that says the film distorts Turing’s character, invents confrontations that never happened, ignores the contributions of many others to the code-breaking effort, turns its lead character into a traitor despite no evidence for it and ends with a scene that Caryl describes as “monstrous hogwash.”

Caryl wonders why more historians and intelligence professionals haven’t criticized the film, and then supplies an answer: “After so many years in which Turing failed to get his due, no one wants to be seen as spoiling the party.”

The “Imitation Game” team hasn’t responded to the piece — TheWrap asked Weinstein Company reps if they or the filmmakers had any comment on the piece, but TWC declined to offer a response — but the breadth of the charges would require far more than a few tweets.

And in a way, that’s good for “The Imitation Game,” as is the fact that, as Caryl points out, his colleagues have not chimed in with their own criticisms. One man’s fevered dismissal of the entire film, however passionate and well-researched it is and regardless of the forum in which it is presented, is not enough to overcome the affection with which the film has been received in many quarters — including, by all accounts, the Academy.

Are these two attacks the start of dirty campaigning?
Whenever a fact-based movie starts getting Oscar attention, it attracts naysayers who point out that it takes liberties with what really happened. Those naysayers almost always have a point, because it’s impossible to make a dramatic two-hour film without taking some liberties.

And whenever the naysayers begin complaining, Oscar-watchers start talking about negative campaigning, about smear campaigns and whisper campaigns and underhanded tactics.

Also read: 10 Things You Might Not Know About the Oscar Best Picture Race

The implication is clear: If something negative is said about Movie A between November and February, particularly if Movie A is among the Oscar frontrunners, then Movie B, C or D must be behind it.

At this point, though, there’s no real evidence that any rival studio put Califano or Caryl up to it; it’s far more likely that they got around to seeing films on subjects they were passionate about, took offense and had forums in which to express themselves.

Even asking around among campaign consultants who’ve been involved in both sides of underhanded campaigning, I couldn’t find anybody inclined to attribute these recent attacks to organized action by rivals.

Besides, the last line of the “Selma” op-ed — “The movie should be ruled out this Christmas and during the ensuing awards season” — was so odd, and so tone-deaf as to how awards season actually works, that it’s hard to imagine it could have been prompted by somebody working for a rival campaign.

Are too many voters reluctant to see “Boyhood?”
Some recent pundits have raised the suggestion that lots of Academy voters just haven’t watched Richard Linklater’s “Boyhood,” which has dominated this year’s critics’ awards and is currently listed as the Best Picture frontrunner in many polls. The suggestion is that the reluctance to sit down for almost three hours with the quiet, leisurely paced film could hurt “Boyhood” and endanger its frontrunner status.

Clearly, it’s possible that the film may not be as beloved by Academy voters as it is by critics — in fact, it’s likely. But if all those critics awards have done anything, they’ve made “Boyhood” a film that every conscientious voter must see, and the idea that enough of them won’t see it to affect its chances makes even less sense than the idea — which was widely floated last year and to which I gave too much credence — that lots of voters were refusing to watch “12 Years a Slave.” That movie, of course, ended up winning Best Picture.

It’s important to remember that in the first round of voting, a film needs passionate followers: Given the way votes are counted, it’s far better to have 500 Academy members putting you at No. 1 on their ballot than to have 3,000 putting you at No. 3.

Also read: How Many Votes Does It Take to Get an Oscar Nomination?

I have no doubt that “Boyhood” has been seen and loved by enough voters to get it a nomination, and while IFC and the film’s campaign team have played things pretty low-key and let the summer release remain relatively under the radar, phase two is where Oscars are won.

So which 2014 movie is The One?
There is no One. Not this year. There’s no “The King’s Speech,” no “12 Years a Slave,” no “The Artist,” no single film that everybody will agree is a clear winner.

There’s not even a “Gravity” to occupy the “If Movie A doesn’t win, then Movie B definitely will” slot.

Whatever wins this year will almost certainly be a compromise choice by lots of people, which is what the second round of Oscar voting is set up to produce. (To get a Best Picture nomination, you need to be a passion pick; to win, you need to be a consensus favorite.)

I would say there are five films that are reasonably safe for Best Picture nominations: “Boyhood,” “The Imitation Game,” “Selma,” “Birdman” and “The Theory of Everything,” with the first three being the likeliest winners.

But with Academy rules permitting anywhere between five and 10 nominees, a number of films are competing for those final slots that may or may not be filled. (Recent history suggests that four of them will be, since the system has produced nine nominees for three years in a row.)

Those other contenders include “Unbroken,” “The Grand Budapest Hotel,” “Whiplash,” “Gone Girl,” “American Sniper,” “Foxcatcher,” maybe even a longer shot like “Into the Woods” or “Interstellar” or “Nightcrawler.”

So there are handful of safe bets. And another handful of contenders.

But there is no One.