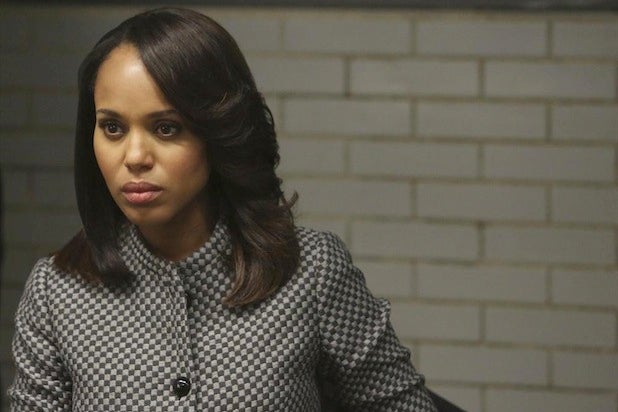 One thing you can always be certain of when you’re watching ABC’s “Scandal” is that every answer only really creates several more questions. Thus was the case with Thursday’s midseason finale.

We left off with Olivia (Kerry Washington) wondering if she had just helped a murderous terrorist escape capture. And Quinn (Katie Lowes) had just made her own escape from torture at the hands of Huck (Guillermo Diaz) by the skin of her teeth – literally. And meanwhile, the VP had just found out that her husband’s penchant for men had spilled over into her career life when he had sex with Cyrus’ (Jeff Perry) husband James (Dan Bucatinsky).

So, what did “Scandal” answer before going into its two month hiatus?

1. Who is Quinn loyal to?
Despite landing back in bed with B6-13 agent, Charlie (George Newbern), we learned that Quinn was on a mission to take down Rowan. That was foiled and she had to make a decision. By the time she made up her mind, it was too late and Rowan was gone. She ended up back at Pope & Associates, but Huck had no apologies waiting for her. Instead, he pulled her gladiator status.

2. Is Olivia’s mom really evil?
Despite some argument on behalf of Maya by Abby (Darby Stanchfield), Maya falls in the evil column for now. I reserve the right to pull this reasoning later. Who knows? There could be more to the story of the bombed plane. Or, the dead airline crew on the Hong Kong-bound plane. Maya could still be running for her life with someone out there dead set on framing her and keeping her quiet. Rowan refused to tell Olivia the reasoning for his imprisonment of Maya for more than two decades. And, no one on “Scandal,” or any good drama for that matter, is truly 100 percent bad.

3. How will Sally Langston (Kate Burton) deal with her homosexual, philandering husband?
She’s a smart and ambitious woman. We knew that. But, that also means she’ll do anything to get what she wants. In the face of her husband’s threat to leave her, Sally repeatedly impaled him with a letter opener. Without skipping a beat, she called Cyrus first. Surprising at first, we then figured out that she did it because she knew he would feel some responsibility for Daniel’s (Jack Coleman) death. She was right. The White House got you, boo. Let the presidential campaigning begin. But, wait, she’s not in the clear. A recording of her confession to Cyrus has landed on David’s (Joshua Malina) desk. It remains to be seen what he does with it.

4. Are Cyrus and James (Dan Bucatinsky) done-zo?
It wasn’t looking too good after Cyrus used James as a political pawn and James then took it to a whole other level. But James is always looking to feel important. So, he has laid down an ultimatum: He won’t leave Cyrus if he’s made the president’s press secretary. Of course, that appointment isn’t going to look shady at all to the outside world… But, Cyrus will do it. And although James can’t promise his love, I think Cyrus knows that if he can keep James around there’s always a chance.

5. Why is Jake (Scott Foley) still around?
It didn’t seem as if showrunner Shonda Rhimes had anything major planned for Jake after making Foley a series regular, but things have changed. Rowan virtually dared Fitz (Tony Goldwyn) to try and stop him, what with that amazing “you’re a boy” lecture. But, I knew Rowan’s constant taunts that the operations of B6-13 were above his pay grade wouldn’t sit well with Fitz. And in the end, he found some way to displace Rowan as the head of the black ops organization with Jake. Nicely played, Fitz.

What questions do you still have after watching “Scandal’s” winter finale?