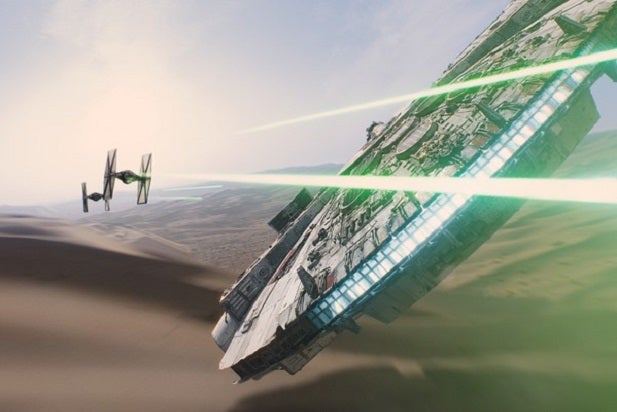 You “Star Wars: The Force Awakens” fans weren’t listening a month ago when I said it wasn’t going to be nominated for Best Picture, were you?

You got all worked up by the ridiculously huge grosses and the fact that AFI put it on its Top 10 list, didn’t you?

You managed to persuade yourselves that because you and everybody you know loves the movie that the Academy will love it too, right?

And now you’re wondering what happened, aren’t you?

Well, here’s what happened: Nothing, really. That nomination for the first “Star Wars” notwithstanding, this is not the kind of movie the Academy responds to. They never have, and they probably never will.

But to reiterate on this sad, sad morning on Jakku, here are some reasons why “Star Wars: The Force Awakens” didn’t get nominated.

1. Because it’s a “Star Wars” movie.
Look, it’s the Academy. Its members are older and more conservative — and to the chagrin of the people who care about ratings for the Oscar show, they’ve never shown much fondness for nominating blockbusters.

After they bypassed Chris Nolan‘s “The Dark Knight,” the Academy even expanded the Best Picture field from five to 10 in an attempt to get them to nominate a few more popular movies. And it didn’t really work: Oh, the odd “The Blind Side” and “District 9” slipped in, but mostly it just gave them more slots to nominate indies and little movies.

It’s just a rule of thumb: The more explosions you have, the less your chance of landing a Best Picture nomination.

2. Because it’s a sequel x7.
Yes, the first “Star Wars” was nominated way back when. That’s because it was fresh and new and startling. If you create a new world, you have a much better chance with the Academy than if you return to a world that was already created — and even the fact that J.J. Abrams returned to that world so lovingly and carefully in his movie doesn’t help him with the Academy.

3. Because it’s good, but not good enough.
When I was considering the possibility of “The Force Awakens” being an Oscar contender in December, I wrote this:

“For that to happen, it would have to be unassailably, inarguably great. If J.J. Abrams‘ film isn’t richly entertaining and grandly satisfying and completely thrilling, and also moving on a whole other level, then it’s just another good-to-great sci-fi movie. And good-to-great sci-fi movies don’t win Best Picture. In fact, most of the time they don’t even get nominated.

“‘The Force Awakens,'” to my mind, is a good-almost-great sci-fi movie, fun and satisfying and pretty much what I want out of a ‘Star Wars’ flick … And to me, that means it’ll probably get a handful of Oscar nominations, but it probably won’t be in play for a Best Picture nod, much less a win.”

Also Read: Can 'Star Wars: The Force Awakens' Be a Force at the Oscars?

4. Because if it couldn’t get a Producers Guild nomination, there was no way it was going to get an Oscar nomination.
This was the final nail in the coffin of the film’s hopes. The Producers Guild of America likes successful movies, and it has a history of nominating big hits that didn’t pass muster with the Academy, including “The Dark Knight” and “Skyfall.”

For “Star Wars” to have any real chance with the Academy, it had to show strength with the PGA. And when the Producers Guild announced its nominations on Jan. 5 and “Star Wars” wasn’t one of them, it effectively closed the book on the possibility that J.J. Abrams‘ space opera was going to make it out of the tech categories.

5. Because “Mad Max” got there first.
While Disney bided its time with “Star Wars,” not screening it early enough for Golden Globes or SAG or critics’ award consideration, another big, beefy action movie came in and grabbed the awards spotlight. George Miller‘s “Mad Max: Fury Road” racked up critics’ honors and became the popcorn movie to reckon with on the awards circuit — and “Star Wars” came along too late to unseat it from that perch.

“Mad Max” was the kind of movie the Academy doesn’t usually recognize, either, and it was a sequel to boot. But it had a credibility-boosting premiere at the Cannes Film Festival, and rave reviews that surpassed those for “The Force Awakens,” and months of reminders that it was the year’s freshest, sharpest action flick.

It had become the big, loud and artful movie that Oscar voters had to reckon with long before “The Force Awakens” showed up.

And look, should we even be worrying about this too much? ABC and the producers of the Oscar show were no doubt hoping against hope that “The Force Awakens” would make it, and I’m sure Disney would have loved to get some more attention for its movie on the awards show broadcast by the network it owns.

But “Star Wars: The Force Awakens” is in another galaxy from all of this Oscar stuff. It’s making money and impacting the culture and all of that. It doesn’t need any shiny little trophies.