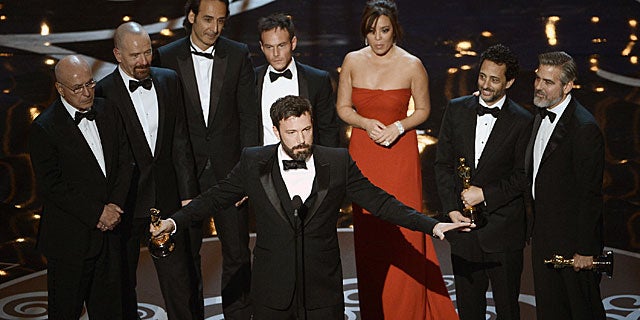 Although his film “Argo” seemed to have been dealt a fatal blow on Jan. 10 when the Academy’s Directors Branch failed to nominate Affleck in the Best Director category, all it did was temporarily turn one of the most charming, good-looking, charismatic actor-directors in town into two things you wouldn’t think he’d ever be: an underdog and a victim. And from that position, Affleck tirelessly and quickly worked to put himself and his film back on top.

It began the night of the nominations, when he won the Critics’ Choice Movie Award for Best Director and began his speech with a wry, “I’d like to thank the Academy” (which would have been the first line of fellow snubee Tom Hooper’s speech if he had won that night), and continued through a string of guild wins that brought him into Oscar night as the unassailable favorite.

Affleck sealed his redemption (or was it revenge?) on Sunday night at the Dolby Theatre, where “Argo” was named the Best Picture of 2012 by voters who no doubt would have happily given him the director statuette if his name had been on the ballot.

This was a night when Academy voters didn’t stand as one behind any particular film. Outside of the animation, foreign-language, documentary and shorts categories, nine different films won Oscars. Three of them won a single award; “Skyfall,” “Django Unchained” and “Lincoln” won two; “Argo” and “Les Misérables” won three.

By the numbers, “Life of Pi” was tops, with four wins, including Ang Lee’s for directing the film. It means Lee now has two Best Director wins, but both times his film didn’t win Best Picture, with his first win coming for “Brokeback Mountain” the year “Crash” won the top Oscar. By winning twice for films that didn’t win Best Picture, Lee tied Steven Spielberg in that regard — and he did so on a night when Spielberg’s film managed one win that everybody knew it was getting, Daniel Day-Lewis for Best Actor, and another that came as something of a surprise, in Production Design.

Jennifer Lawrence came into the Best Actress race as a favorite over Jessica Chastain (“Zero Dark Thirty”) and Emmanuelle Riva (“Amour”), whose chance to become the oldest Oscar winner ever (on her 86th birthday, no less) went unfulfilled as Lawrence won the only award of the night for “Silver Linings Playbook.”

Anne Hathaway won the Supporting Actress award for “Les Miz,” as everyone knew she would, on a night when “Dreamgirls” actress Jennifer Hudson showed up to remind everybody that Hathaway wasn’t the first to win that particular award with one show-stopping song.

And Christoph Waltz triumphed in a tight Supporting Actor race, winning only the second acting award to go to a Quentin Tarantino movie only two years after he won the first Tarantino-movie acting award for “Inglourious Basterds.”

In a topsy-turvy year in which none of the other presumed frontrunners could establish momentum and the Academy asked its voters to hurry up with their nominating ballots and then turn around and wait for the final voting to begin, Affleck and “Argo” turned out to be what those near-6,000 voters were looking for all along: an entertaining, celebratory drama that makes Hollywood out to be a savior, and lets viewers unashamedly root for the good guys without any untidy or disquieting thoughts about their motives. And in a year when the other based-on-a-true-story dramas, “Zero Dark Thirty” and “Lincoln,” came under fire for real or perceived inaccuracies, “Argo” got away with a fabricated, Hollywood-ized third act with hardly a whisper of criticism.

Credit Affleck for being able to charm any room of voters, viewers or pundits, and credit Warner Bros. for a steady campaign that happily let “Lincoln” and “Les Misérables” wear the frontrunner crowns that they couldn’t hang onto.

And credit the Academy for knowing what it likes. The organization likes to say that it’s getting younger and more diverse, and for a few years after the outcry that followed the traditional virtues of “Crash” beating the edgier and more far more acclaimed “Brokeback Mountain” in 2006, it seemed as if voters were indeed becoming more adventurous when they cast their ballots.

The next year, the Oscar went to “The Departed,” far darker, bloodier and more violent than the usual Best Picture winner. Then it went to the brilliantly disturbing “No Country for Old Men”; two years later, the tiny, tense indie “The Hurt Locker” triumphed over James Cameron and the biggest movie ever, “Avatar.”

But since then, the voting choices we’ve seen suggest that the more conservative Academy may be back. “The Social Network” may have been the zeitgeist movie of 2010 and a near-unanimous critical favorite, but the friendlier “The King’s Speech” took home the gold. The next year, the charming and lightweight “The Artist” easily vanquished its thornier competitors.

It may not be as challenging as “Zero Dark Thirty” or as consistently light on its feet as “Silver Linings Playbook” or as dazzling as “Life of Pi” or as substantial as “Lincoln.” But it’s a fun, rousing ride in which Hollywood is the hero – and as its spokesperson, it had a guy with the charm and energy and self-deprecation and drive to bring it home.

Still, “Argo” was far from a dominant winner on Sunday. Its three awards — the others coming in the Film Editing and Adapted Screenplay categories — tie it with “Crash” as the least-honored Best Picture winner of the last quarter-century.

The surprises were few in a show that felt longer than its three-and-a-half hour length. Pixar’s “Brave” didn’t have much critical support against the likes of “Wreck-It Ralph” and “ParaNorman,” but its recent guild wins suggested that it might have strength with Academy voters. And it did.

In the foreign-language and documentary categories, Sony Pictures Classics came in with the favorites, “Amour” and “Searching for Sugar Man,” respectively, and walked out with the winners.

And in the end, the night belonged to the movie that didn’t win anything in the first two hours and then captured enough wins to become a respectable Oscar champ.

“Argo” bashers — whose numbers grew in the weeks leading up to the Oscars, not because they’d always hated the movie but because they thought it paled next to other nominees — will say that history will not look kindly on this choice. And maybe they’ll be right; maybe “Lincoln” will grow in stature, or “Zero Dark Thirty” will seem a greater and greater accomplishment the further removed we get from the congressional criticism that helped derail it.

But for now, history is insignificant. For now, Affleck is the king of Hollywood, with past king George Clooney (an “Argo” producer) standing slightly in the shadows behind him.

For now, despite the fact that “Argo” is only the fourth film to win Best Picture without a director nomination, it is Lee whose win comes with an asterisk — voters chose him for Best Director because they weren’t given the option of voting for Affleck.

And for now, the Academy’s Directors Branch is the group with egg on its face. (“They know they screwed up,” said MacFarlane in his monologue.)

But the line got a laugh when the movie came out — and as Affleck goes home with his Oscars, we all know who’s getting the last laugh.