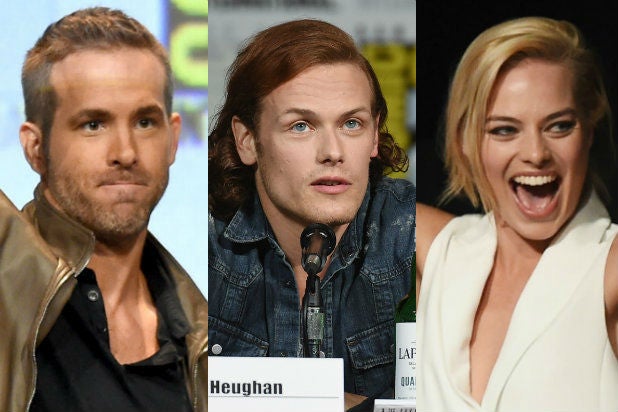 Another San Diego Comic Con has come and gone, and like a graduating high school, this year saw its winners, losers, popular kids, surprising transformations and a few dark horse victories.

Film and TV studios trot out star-studded panels and exclusive footage year after year with the hope of impressing fans and building buzz, and some are always more successful than others.

“Suicide Squad,” which met all its high expectations. “Outlander,” brought its cast to delight audiences with their personalities (nothing like the distressed pair we see on TV). And things could not have gone better for Ryan Reynolds, whose triumphant comeback as Deadpool seemed to restore some respect for the actor on the convention floor.

The four-day weekend was filled with other eclectic offerings and fan-favorite panels from the likes of “Game of Thrones,” “Star Wars,” “X-Men: Apocalypse” and “The Hunger Games: Mockingjay Part 2.”

Here are TheWrap’s Superlatives Awards for SDCC’s Class of 2015:

“It” Girl: Gal Gadot
The San Diego streets were lined with fan favorite actresses, but no one captivated quite like Wonder Woman Gadot. She’s got the frankness and allure of a foreign-born star but an ease and camaraderie with peers Ben Affleck, Henry Cavill and Amy Adams that makes her seem likeable and funny. She’s undeniably one to watch.

Best Proof of Life: Harrison Ford
The “Star Wars” panel was adoring of new and returning players, but only one star brought the entire room to its feet: Harrison Ford, appearing in public for the first time since his recent, quite serious single-engine plane crash in Los Angeles. Bounding onto stage and joining legacy cast members Mark Hamill and Carrie Fisher, a standing ovation awaited Ford who looked close to his fighting weight and spoke eloquently about returning to the franchise.

Best Coming-of-Age: “The 100”
After two seasons of “The 100,” The CW’s little post-apocalyptic show that could is all grown up with the fanatical fan base to match. Appearing in Ballroom 20 for the first time, the cast and crew had no problem playing to their largest crowd yet. With announcements like the return of fan-favorite Alycia Debnam-Carey in Season 3, the panel drew cheers and even a few tears. At one point star Ricky Whittle had to rush off stage to comfort an overwhelmed fan. You know you’ve made it at Comic Con when…

Best Transformation: “Outlander”
They may play tortured, star-crossed lovers onscreen but during “Outlander”‘s second Comic-Con appearance, stars Sam Heughan and Caitriona Balfe proved they were anything but in real life. Cracking jokes, gamely putting on a pirate costume and even doing shots of whiskey on stage, Heughan seemed far from the shackles of his character but just as appealing to fans. The lighthearted panel was capped off with a gag reel that brought a modern twist to the costume drama.

Best Comic-Con Alumni: Quentin Tarantino
Quentin Tarantino brought a riveting seven-minute package for his Western “The Hateful Eight,” and while the director is glorified by cinephiles he seemed more a man of the comic-loving people. “I remember coming here in ’88, ’89, and saving all my money from my minimum wage job for July. And you come down and stay in a room with five guys and spend all your money filling up your comic collection,” the director said at his Saturday presentation. The “Pulp Fiction” helmer said despite recent years of star power, the convention floor still delivers for long-time devotees .

Best Secret Keeper: “Game of Thrones”
The “Game of Thrones” panelists did their best to sidestep the “Is Jon Snow really dead?” question – by avoiding it completely. Moderator Seth Meyers did not bring it up, and when a fan did, it was brushed off with jokes and distraction. Indeed, the entire panel was light on spoilers, and the cast admitted the pressure is on more than ever now that the twists and turns on the show have caught up to and at times surpassed the George R. R. Martin books on which they’re based.

Best Revenge: Ryan Reynolds, “Deadpool”
Ryan Reynolds did not shy away from his superhero past during Fox’s “Deadpool” presentation, where the first footage from the film drew the Hall H crowd to its feet to chant “One more time.” It’s a triumphant comeback for Reynolds, whose superhero career seemed DOA when “Green Lantern” fizzled. “I’ve only gotten to do one other proper….sorry, not proper, superhero movie…” he joked at the “Deadpool” panel, and validation has never felt sweeter.

Most Likely To Succeed: “Suicide Squad”
Sometimes bad is better, and it’s a pretty safe bet that Warner Bros. has a blockbuster on its hands with “Suicide Squad,” about a team of villains who band together to fight the maniacal joker in Jared Leto. The very image of the film’s stars (out of costume, nonetheless) sent fans into frenzy: Will Smith, Viola Davis, Margot Robbie, Cara Delevigne, Jai Kourtney and more made a silent promise to bring the wicked world to light — and we can’t see them failing.

There are two sides to Comic-Con. This gallery is about the right side of the collage.