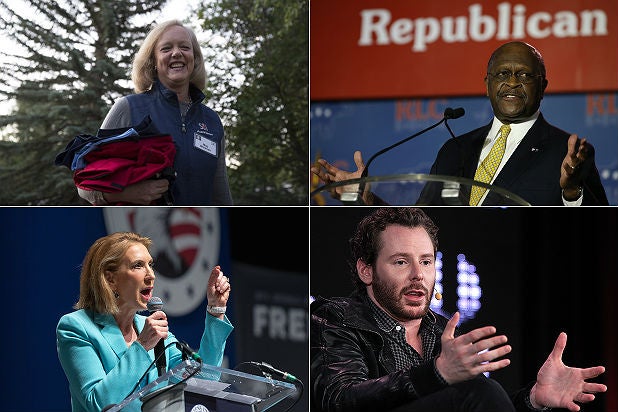 When NBC announced it was cutting ties with Donald Trump on Monday due to “derogatory” statements made by the real estate mogul, the network also said that it would be continuing with “Celebrity Apprentice” without him.

TheWrap also reported that the network is unlikely to continue with any of the Trumps to host the show, despite Donald’s children, Eric, Ivanka and Donald Jr. having served as mentors and judges.

So who will be the new host firing celebrities when the show resumes in the fall? As the failure of “The Apprentice: Martha Stewart” showed, not just anyone can replace The Donald, but TheWrap compiled a list of nine blowhard business men and women who might be up to the job.

1. Kevin O’Leary
Satirically dubbed “Mr. Wonderful,” “Shark Tank” star Kevin O’Leary is no stranger to business reality television. His brash persona and fearlessness in telling people that their ideas suck make him the perfect replacement for the loud-mouthed Trump.

2. Jim Cramer
CNBC’s host of “Mad Money” makes his career telling people how best to spend and make their money. And he does it in a loud, in-your-face way that calls to mind Trump’s own brash demeanor on the NBC reality series.

3. Carly Fiorina
Assuming Fiorina doesn’t win the Republican presidential nomination, the former CEO of Hewlett-Packard and first woman to lead a Fortune 50 business could be the high-profile replacement NBC is looking for.

4. Meg Whitman
Hewlett-Packard’s current CEO, Meg Whitman proved her business ability as CEO of eBay, helping the company grow into the $8 billion company it is today. She proved herself as a blowhard during her campaign for governor of California in 2010, promising to bar illegal immigrants from state colleges and universities, while herself having employed an illegal immigrant as a housekeeper for nearly 10 years.

An English businessman and high school dropout, Branson began making his fortune with Virgin Records in 1973, and continued to grow it with over 400 business under The Virgin Group. The billionaire jet-setter regularly makes headlines with his lavish lifestyle and wild stunts.

Also read: NBC Distances Itself From Donald Trump: 'We Do Not Agree With His Positions on a Number of Issues'

7. Herman Cain
The former CEO and president of Godfather’s Pizza, Herman Cain proved his ability to lead a successful business before he made a play for Republican presidential nomination in 2012. His controversial comments and passionate speeches earned him plenty of attention during the campaign, just the kind of attention NBC might want.

8. Steve Wynn
Wynn is credited with the expansion and revitalization of the Las Vegas strip in the 1990s. Worth $2.7 billion, the businessman owns properties in both Nevada and Macau. Wynn recently made headlines for calling the economic recovery “a lie” and “pure fiction.”

9. Sean Parker
Parker’s rise as founding president of Facebook got the Hollywood treatment in 2010’s “The Social Network.” But what the movie didn’t document was his ousting from the company due to a cocaine-related scandal in 2005. Though Parker is now worth $2.8 billion as the founder of Brigade Media, the Napster co-founder is better known for his hard-partying lifestyle.