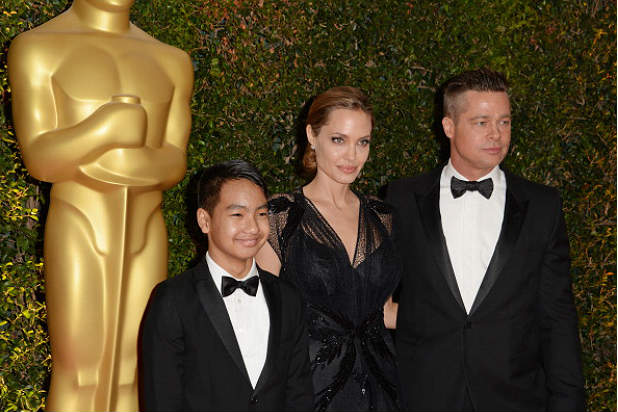 Angelina Jolie may have been the star with the hottest tabloid profile, but Steve Martin and Angela Lansbury stole the show on Saturday night at the Academy’s Governors Awards, a night of emotion that doubles as a key stop on the awards circuit.

Jolie, who received the Jean Hersholt Humanitarian Award for her efforts on behalf of refugees and others, flew in from the Australia set of the movie she’s directing, “Unbroken,” and came to the Ray Dolby Ballroom at Hollywood & Highland with star hubby Brad Pitt and their son Maddox.

And while her tribute led to the night’s first two standing ovations – one for Jolie and one for World War II vet Louis Zamperini, the subject of her new film – the emotion of that segment was overshadowed by the mixture of biting humor and heartfelt sentiment in the presentation to Martin, and by the outpouring of emotion for Lansbury.

As usual, the Governors Awards were far friendlier and less tense than the Oscars themselves – the winners, who also included costume designer Piero Tosi, already know they’ve won, and the rest of the room is there to help celebrate them.

Of course, much of the rest of the room is there for another reason, too. The Governors Awards began in 2009 as a collegial event that allowed the Academy to simultaneously streamline the Oscar show by moving the honorary awards off the air, give each honoree a more extensive tribute than would have been possible on the big show, and bestow more awards – three or four every year since then, as opposed to the one or two that would have been given out under the more restrictive, older rules.

But the first year’s event was so successful that studios and Oscar campaigners quickly woke up to the fact that the awards puts a roomful of Oscar voters in a good mood – and it might not be a bad idea to drop some Academy Awards contenders in their midst to do a little glad-handing.

Martin Short joked that the Governors Awards is “the highest honor an actor can receive … in mid November,” but they’ve also become something else entirely: the most important campaign stop during this stretch of awards season.

The list goes on and on, filling the room and helping make this Governors Awards the hottest ticket of the five that have taken place. (Jolie’s star power certainly didn’t hurt, either.)

From 6:00 p.m. until the presentation began around 8:30, contenders worked the room and dropped tidbits of information. Russell said he’d locked the picture on “American Hustle” and is currently doing the final sound mix; McConaughey said he’d come from working on Christopher Nolan’s sci-fi epic “Interstellar,” which is due to wrap in mid-December and is currently ahead of schedule, despite a big budget and five-and-a-half month shooting schedule.

Director and AMPAS governor Kathryn Bigelow chatted with producer Megan Ellison, with whom she’d made “Zero Dark Thirty,” and admitted that the two had been discussing a new movie. And “August: Osage County” actress Margo Martindale, a strong Best Supporting Actress contender, said she was used to television awards events, but not film ones.

“They’re definitely different,” she said, “I feel inside the television ones. I feel outside the movie ones.”

As for the real purpose of the Governors Awards – the honoring, not the campaigning – that went off smoothly and emotionally. Produced by Paula Wagner, this year’s show was more streamlined and less ragged than some of its predecessors, for the most part doing away with toasts from the audience or long, rambling speeches.

The tribute to Jolie led off the program with thank-yous from four actors from her Bosnian drama “In the Land of Blood and Honey,” then a film summarizing both her career and her humanitarian efforts.

It was, it’s safe to say, the first Hersholt presentation to include clips from a movie based on a video game (“Lara Croft: Tomb Raider”) and another based on a comic-book miniseries (“Wanted”).

Gena Rowlands toasted Jolie, and asked, “How does she have the time to do all this? She acts and directs, she has a large family … and she has to keep that smile on Brad’s face.”

George Lucas presented the award to Jolie, who promised her son she wouldn’t cry. The most emotional part of her speech was a long thank-you to her late mother, who, she said, told her, “nothing would mean anything if I didn’t live a life of use to others.”

Italian costume designer Piero Tosi was the only below-the-line honoree, and the only one who was not present. (He is in his 80s, and in fact has never been to the United States.) He was honored by a number of other costume designers, who were still elated at the Academy’s creation of a separate branch for them earlier this year.

But legendary actress Claudia Cardinale took the stage to accept the award on Tosi’s behalf – a task that fell to her, she said, because Tosi believes “his work as a costume design is to make the actress,” and because he felt bad for “making me suffer a lot” with his costumes.

If the first two presentations had moments of humor, Steve Martin’s turned into a full-fledged roast. “Tonight is one of those magical nights when the one-percenters get together to honor one of our own,” said Martin Short, whose speech made fun of the Governors Awards, dropped in some political humor (“President Obama said if you like your Oscar, you can keep it”) and mostly skewered the honoree.

“I think it’s safe to say that Steve Martin is a genius,” said Short. “Not necessarily true, but safe.”

Tom Hanks added that Martin “has altered the state of comedy for the last four decades,” before Martin himself took the stage.

“It has been a longtime dream of mine that one day I would receive an honorary Oscar,” he began. “Tonight, I feel I am one step closer to that dream.”

As befits a man who hosted the Oscars with considerable grace and wit twice (and soldiered through an awkward co-hosting gig with Alec Baldwin one other time), Martin was a sharp, classy honoree – but the smooth façade slipped when he thanked his wife Anne Stringfield, “who is as beautiful as she is smart.”

With that, Martin choked up, and then admitted, “I knew I wouldn’t be able to make it through this speech. I read it to my dog this morning and wept.”

He broke down again at the end of his speech, when he delivered a lovely homage to the movie business, which he said is truly his home. “It is where I found friends – fascinating, funny and lifelong,” he said. “So thank you movies, and thank you Academy for this award, a reminder of the true benefits that I have received.”

With that, Martin became the first and only honoree to receive a full standing ovation when he took the stage, and another when he left it. But Angela Lansbury, who received the final award of the night in a presentation by Emma Thompson, Geoffrey Rush and Robert Osborne, followed by receiving the biggest ovation of the ceremony.

Lansbury had received two Oscar nominations by the age of 20, one for “Gaslight” and one for “The Portrait of Dorian Gray,” but her work in film has long been overshadowed by her appearances on Broadway and particularly in the long-running television series “Murder She Wrote.”

That show, she said, “has given me more worldwide attention than anything I’ve ever done in movies or onstage.” Looking at the Oscar, she added, “I feel really undeserving of this gorgeous chap.”

When the ceremony ended, the assembled governors posed for a class photo as guests lingered, mingled or headed for the exits.

Some were going back to work: Jonas Cuaron, for instance, said he was in pre-production on “Desierto,” which he expects to begin shooting in February with Gael Garcia Bernal. Asked if promoting “Gravity” was taking away time he needed to ready his own film, he shrugged. “It’s not so bad doing things now,” he said. “It’s not like this is March or anything.”

Yeah, but isn’t there another big Academy event on March 2, in the theater that sits right next door to where the Governors Awards are held? And won’t that event (the Oscars) likely demand his participation?