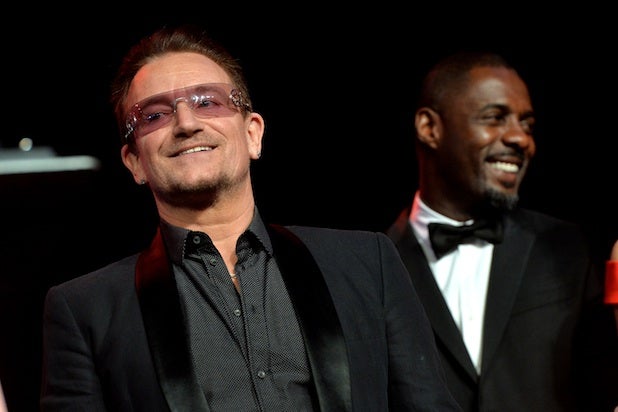 Meryl Streep, Julia Roberts, Sandra Bullock, Tom Hanks, Matthew McConaughey and U2’s Bono and the Edge came to the desert on Saturday night for what might have been the most star-studded Awards Gala ever put on by the Palm Springs International Film Festival.

Those stars were joined by Bruce Dern; Amy Adams, Bradley Cooper and Jeremy Renner from “American Hustle”; star Lupita Nyong’o and director Steve McQueen from “12 Years a Slave”; and composer Thomas Newman as honorees at the 25th anniversary of the festival, which takes place in the thick of Oscar season in the desert resort town 100 miles east of Los Angeles.

As usual, the three-hour gala mixed odes to challenging films with plugs for sponsors like Cartier, with the relentlessly chirpy Mary Hart taking her usual role of emcee in a room of more than 2,000 guests, sponsors and well-heeled locals. The event raised close to $2 million for the Palm Springs International Film Society, a non-profit which stages the festival and also puts on educational programs.

Here are a few of the things we learned on Saturday night in the cavernous Palm Springs Convention Center – or, as Tom Hanks referred to it, “Sonny Bono’s rec room”:

1. This weekend in Palm Springs, “Bono” is pronounced Bah-no, not Boe-no.
The Palm Springs Film Festival was launched 25 years ago by the latemusician and then-Palm Springs mayor Sonny Bono, whose wife, former congresswoman Mary Bono, is still a strong presence at the gala.

Sonny, of course, pronounced his last name Boe-no, which led to some jokes when the festival’s Sonny Bono Visionary Award went to the first time not to a director, but to the band U2, whose lead singer Bono pronounces his name Bah-no.

But any thoughts that Bono might have to take a back seat to the festival’s founder were quickly dispelled by the singer’s passionate, eloquent speech, which in many ways stole the show from the movie stars who are more typical honorees at the event.

“I guess this is an award for not shutting up and sticking to what you’re good at,” he began. “This is kind of an award for being a pain in the arse, isn’t it?”

He paid tribute to other artist-activists, including several of the night’s honorees; pointed out that “more people live off their imaginations” in California than anywhere else in the world; and delivered an impassioned plea to support the global AIDS problem, and a thank-you to American money that he said has saved 7.8 million lives by funding antiretroviral therapy in the developing world.

“Our simple belief is that where you live should not decide whether you live,” he said, a few minutes before concluding on this note: “So thank you to the visionaries in this room … You all know that a vision without a promise is just a fantasy, and we’re not interested in that.”

David O. Russell was the first person to take the stage after Bono’s speech, and he muttered, “After Bono? Good grief, Charlie Brown.” A few minutes later, Sandra Bullock started her speech by saying, “Following Bono – not a good thing for me.”

Of course, U2 are right at home in this neighborhood – after all, they shot the album cover for their landmark album “The Joshua Tree” in the desert not far from Palm Springs.

“We’ve had a long history with the desert,” Bono said when he and the Edge stopped by TheWrap’s photo studio at the gala. “We shot the album cover here,” he added, and then looked over at his bandmate, who was chatting with Sandra Bullock. “And Edge likes to run naked through the desert.”

2. It was a great year for movies, and performances.
You might have heard this one before – it’s been a mantra in year-in-review stories for a couple of months. And it certainly popped up in speeches on Saturday night as well, beginning early in Matthew McConaughey’s funny and touching remarks when he said, “I think we put out a damn good slate of films this awards season. I think we put out a damn good pro-duct. I want to say congratulations to us as an industry on that.”

Sandra Bullock later praised the year’s movies as well, seemingly coming close to tears when she talked about “heartbreaking stories that can help me tell my son how far we’ve come.” (“12 Years a Slave,” perhaps?)

Tom Hanks singled out the many great fact-based stories, and then threw in a nod to “Gravity”: “Fake, but oh-so-real.”

By the time it came to the last award of the night, Meryl Streep could only sigh. “My whole speech was already said by everybody,” she said. “What a good year, blah blah blah, what great performances. And it’s true.”

3. Sandra Bullock is the most self-deprecating person in Hollywood.
When the “Gravity” star won the Oscar three years ago for “The Blind Side,” her speeches and interviews were full of an aw-shucks modesty that was both endearing and effective; before anybody else could wonder if she was really a serious rival to the likes of Meryl Streep, she was wondering it herself, out loud.

On Saturday, though, she had some competition in the self-deprecatathon that broke out onstage. The talent reps might work hard to negotiate these awards, but from the speeches you’d think that none of the winners deserved the recognition.

Julia Roberts, in the night’s shortest and pithiest speech, spread the credit: “It just makes me think of something I learned in high school … all birds fly higher and faster in formation than any individual bird will fly alone … My career is an illustration of that fact.”

Meryl Streep tried to quell a standing ovation by saying, “Sit down, good lord,” and dismissed her Icon Award with, “I don’t feel like an icon. Most days, I feel like an I-can’t,” pronouncing it i-con’t.

Still, nobody was as relentlessly but charmingly self-deprecating as Bullock, who began by talking about her “low self-esteem” and structured her speech around the things she said she read after Googling herself and looking through the comments section of websites.

Summing up her findings, she concluded her speech by saying, “From this not-particularly-talented, mediocre, over-40 woman, I’m so grateful and so appreciative.”

4. This time of year, exposure is the coin of the realm.
When it comes to awards that are negotiated rather than voted – a crop that includes Palm Springs and Santa Barbara Film Festival honors, the Hollywood Film Awards and a variety of honorary plaudits – honorees will occasionally let it slip that they aren’t taking the whole thing too seriously.

(Case in point: the 2012 Hollywood Film Awards, which almost turned into a roast.)

But from the time Lupita Nyong’o said, “I think I might need tear-duct surgery or something to stop crying so much,” it was clear that the Palm Springs honorees were not going to look askance at the honors they were receiving during a critical voting period.

Bruce Dern compared the Palm Springs honor to “The Price Is Right,” where contestants are summoned to the front with the phrase, “Come on down!”

And amidst the many, seemingly heartfelt thank-yous, Hanks summed up the festival’s place in awards season succinctly when he said, “it means, without a doubt, the holidays have come to an end. And for a few lucky people, the Hollywood mule train is just beginning.”

5. As usual, nobody’s working harder than Harvey Weinstein.
Of the 11 awards handed out on Saturday, three were for Weinstein Co. films. (Sony and Disney were next with one-and-a-half each, if you consider that Tom Hanks’ award was for both Sony’s “Captain Phillips” and Disney’s “Saving Mr. Banks.”)

And Weinstein stars were everywhere – not just with Idris Elba and Naomie Harris presenting the award to U2, Ewan McGregor introducing Roberts and Margo Martindale doing the honors for Streep, but with “Philomena” star and writer Steve Coogan and “The Grandmaster” director Wong Kar Wai walking the red carpet as well.

Not that any of them had time to hang around in Palm Springs: On Sunday, TWC is doing a tea with Coogan and “Philomena” composer Alexandre Desplat, a “Grandmaster” screening and Q&A with Wong Kar Wai and an “August: Osage County” screening and Q&A with Streep and McGregor, all in Los Angeles; up the coast in Santa Barbara the same day, “Lee Daniels’ The Butler” star and “Fruitvale Station” producer is receiving the Kirk Douglas Award for Excellence in Film from the Santa Barbara International Film Festival.

The only question: How many of those events can Harvey get to, and which ones will he have to skip?