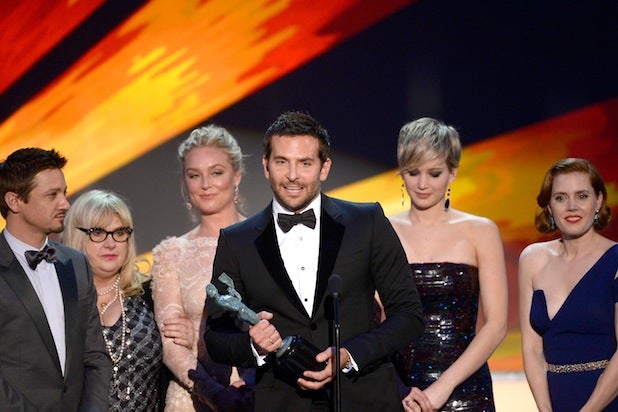 The late-screening “Hustle” had gone into the show with only two acting nominations to four for its chief rival, “12 Years a Slave.” And the night didn’t begin well for David O. Russell’s film, which saw saw supporting actress nominee Jennifer Lawrence lose the first award of the night to Lupita Nyong’o from “12 Years a Slave.”

But the seriocomic caper film showed that its windwall on Thursday, when it scored nods in all four Oscar acting categories, was indicative of widespread support among the group that makes up by far the Academy’s largest branch.

The SAG Ensemble award was an honor for which “Hustle” was a slight favorite, and one it needed to win. The award only goes to the Oscar best-picture winner about half the time, and three of the last five years – but in the absence of any other guild awards, the SAG win made “Hustle” the Oscar frontrunner for at least a day.

That status could either change or be cemented at Sunday night’s Producers Guild Awards, which could be a crucial next step for “Hustle” or a turning point for one of its rivals.

“Gravity,” another Best Picture frontrunner, did not have a large enough cast to figure into the SAG ensemble race, and Nyong’o’s win showed that “12 Years a Slave” still has formidable support. Either of those films could make a strong move at the PGA.

The “American Hustle” win ended a strange streak of five years in which the SAG ensemble award had gone to the largest nominated ensemble. The stretch included Oscar Best Picture winners “Argo,” “The King’s Speech” and “Slumdog Millionaire,” as well as non-winners “Inglourious Basterds” and “The Help.”

As for the best-actress race, that may have been wrapped up as soon as Woody Allen’s “Blue Jasmine” began screening over the summer. Cate Blanchett was anointed a frontrunner back then, and nothing has happened since to change that perception.

It’s hard to imagine that her joking admonition to those who didn’t vote for her – “better luck next year” – won’t apply to Oscar voters as well.

Jared Leto‘s supporting-actor SAG victory, which followed similar wins at the Golden Globes and Critics’ Choice Movie Awards, simply reinforced that the “Dallas Buyers Club” actor is as much a lock in his category as Blanchett is in hers. And his co-star Matthew McConaughey, who once seemed to be an underdog to Chiwetel Ejiofor in the best-actor category, has increasingly pulled away and become the guy whose performance just can’t be denied.

(The fact that he’s a gloriously entertaining speechmaker who always seems a little unhinged as he rips through his thank-yous doesn’t hurt, either.)

In the television categories, SAG brought Alec Baldwin’s seven-year streak for “30 Rock” to an end by giving the comedy-actor award to Ty Burrell for “Modern Family,” but they extended or started other streaks: Burrell’s show won the ensemble award for the fourth consecutive year, Julia Louis-Dreyfus won for the second year in a row for “Veep” and Bryan Cranston for the second year for “Breaking Bad.”

But the television awards came at the end of the run of TV honors, four months after the Emmys and a week after the Golden Globes have saluted many of the same shows and performers. So the cast of “Breaking Bad” got to accept one final award for one final season, and Michael Douglas’ trip to the podium to accept a trophy for “Behind the Candelabra” was likely the last (of many) he’s made for that film. (Now he can stop finding new ways to be gracious to his perpetually bypassed co-star Matt Damon.)

For the movie contenders, on the other hand, Thursday’s Oscar nominations and Saturday’s SAG Awards were the true turning point in awards season – the moment when critics stopped handing out awards, and people who work in the industry started.

This is where the true road to the Oscars begins, and at the moment “American Hustle” is in the pole position.