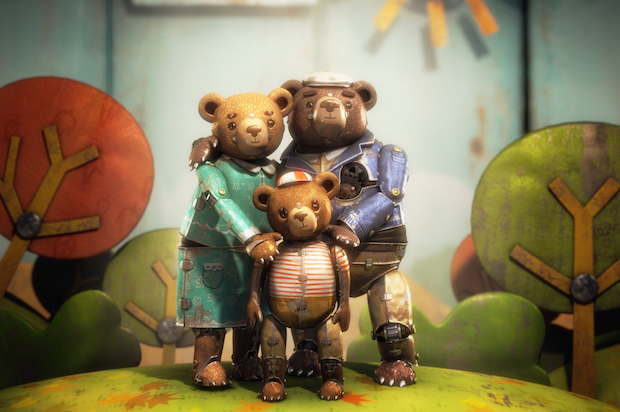 Many an Oscar pool has been won or lost in the three shorts categories, which have historically been among the toughest races to predict. In the past, movie fans would have to look at the subject matter and try to figure out what Oscar voters might like.

(It’s about the Holocaust? We have a winner!)

But in recent years, the Oscars’ short films categories have changed, first with Magnolia and ShortsHD’s annual theatrical distribution of all the nominated shorts, which made it possible for completists to actually see what they’re picking.

A second major change came when the Academy decided in 2012 to end the old rule that members could only vote in the categories if they had attended special AMPAS screenings of all the films. Now, the Academy sends DVDs of all the nominees to every voter, and doesn’t require them to prove they’ve watched all the films before voting.

That changes the dynamic, and opens the possibility that some voters don’t watch everything before casting their ballots. In the Best Animated Short category, the running time of the five nominees is less than an hour, which means it’s hard to imagine a voter not watching the entire DVD — but the five documentary shorts total almost two hours and 40 minutes, a long haul to be immersed in dark topics.

(And yes, there is a Holocaust movie among them.)

Here’s TheWrap’s guide to the three categories, but Oscar pool players beware: There’s not a single clear winner in the batch. To my mind, all three categories sport three potential winners. Best Animated Short is the category whose results changed most dramatically when the new rules were put in place.

Prior to 2002, when the Best Animated Feature category was created, Pixar and before that Disney often won the animated-short award; but after the category was created, and subsequently dominated by Pixar, short films by Disney-Pixar were nominated nine times in the next 10 years without winning once. It was as if the small group of voters who participated in this category had decided that the companies were playing in the big leagues, and they were determined to use the animated-short category to honor smaller films.

But since the change in voting opened up the electorate to the entire Academy, Disney has won twice in three years, with “Paperman” in 2013 and “Feast” last year. That means this year’s Pixar nominee, “Sanjay’s Super Team,” shouldn’t face any voter resistance even though the company will undoubtedly win Best Animated Feature this year.

What it will face is still competition from some other inventive shorts.

“Bear Story”
A richly imagined CG film about a melancholy bear who builds an elaborate mechanical diorama in an attempt to find the wife and son from whom he’s been separated, director Gabriel Osorio’s film won TheWrap’s ShortList Film Festival in August. Voters have often responded to personal stories in the animated shorts, so this could be a real contender – and maybe even the favorite – if they realize that the film is an allegory for the way families were split apart during the brutal Augusto Pinochet regime in Chile, with the lead character based on Osorio’s grandfather.

“Prologue”
This hand-drawn portrayal of a battle between the Spartans and Athenians is a technical feat, and a showcase for animation veteran Richard Williams’ skill at line drawing. But it’s hard to imagine the graphic and bloody short connecting with voters on an emotional level.

“Sanjay’s Super Team”
Another personal story comes from Pixar director Sanjay Patel, whose own life inspired this short about a young Indian boy finding a ground between his superhero fantasies and his father’s Hindu religion. It may seem a little slight, and it’s not as affecting as the last two Disney winners, though it is personal and impeccably-executed enough to be a contender.

“We Can’t Live Without Cosmos”
A Russian short about two friends in training to be cosmonauts, and the reaction of one when a mishap befalls the other. Konstantin Bronzit’s film is playful and touching, but it doesn’t seem substantial enough to be a serious threat in the category.

“World of Tomorrow”
Don Hertzfeld’s imaginative sci-fi short won the Annie Award for short animation and is the most critically-acclaimed of the nominees. Animated with stick figures, it is the sparest but longest film, a conversation between a little girl and one of her third-generation clones speaking to her from 200 years in the future. The film is ambitious and adventurous in both its theme and its execution, but is it visually arresting enough to win?

Oscar outlook: I think it’s between “Bear Story,” “World of Tomorrow” and “Sanjay’s Super Team,” with the win probably going to one of the first two. 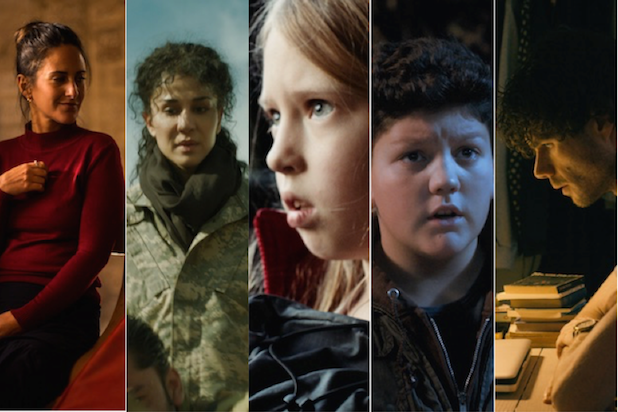 Again, the vote could go in a number of different directions. Two of the films have a light touch and three are darker – and while voters in the category have been known to go for a good joke, this feels like a year when they’ll want something tougher.

“Ave Maria”
It’s odd to think of a film set on the West Bank as being one of the lightest of the nominated shorts, but Basil Kahlil’s “Ave Maria” starts with a family of Israeli settlers ramming their car into a statue of the Virgin Mary outside a rural convent, and from there turns into a comedy of errors. Its hope for a win rests on voters wanting a respite from the heavier subject matter in the rest of the category.

“Day One”
Directed by U.S. Army veteran Henry Hughes and based on his experience in Afghanistan, “Day One” follows a new translator’s first day on the job, when she’s unexpectedly asked to deliver the baby of a bomb-maker’s wife. A tense examination of cultural barriers in the heat of a conflict zone, the film already won a gold medal at the Student Academy Awards.

“Everything Will Be Okay”
This German film by Patrick Vollrath was also a Student Oscar winner in the international category. It focuses on a divorced father who picks up his daughter for a visit, but has other plans for the two of them. The longest of the live-action shorts at 30 minutes, it tells a wrenching story and feels substantial enough to be a serious contender for the Oscar.

“Shok”
The darkest of the nominees in is based on real events in the life of producer/actor Eshref Durmishi, who was a boy during the Serbian war in Kosovo in the 1990s. This story of two friends in a village occupied by Serbian soldiers is tough and dark, with a shocking ending that will probably turn off some voters but impress others.

“Stutterer”
Benjamin Cleary’s film, at 12 minutes the shortest in the category, deals with a typographer with a speech impediment who’s reluctant to meet the woman with whom he’s cultivated an online friendship. The film is affecting and amusing, but a twist at its ending undercuts some of what has happened up to that point, and emphasizes a slightness that could work against it with voters.

Oscar outlook: Again, I think it’s a three-way race, between “Everything Will Be Okay,” “Day One” and “Shok.” I’m leaning toward the former, but barely. The subject matter of the five short docs is Ebola, Agent Orange, the Holocaust, honor killings and capital punishment, but that roll call of dark topics does a disservice to five strong films that manage to be enlightening about tough subjects.

This category has been dominated in recent years by serious, issue-oriented docs that are close to the 40-minute limit, and often are funded, produced and/or distributed by HBO. That narrow focus sometimes does a disservice to the full range of non-fiction filmmaking, but this year’s nominees make up a striking and worthy group of films, as uniformly high-quality as any Oscar category.

“Body Team 12”
One of the three HBO nominees in the category follows the members of a team of medical workers who remove the bodies of Ebola victims, often against the wishes of the victims’ families. Executive produced by Paul Allen and Olivia Wilde, the film is wrenching, but by far the briefest of the nominees at 13 minutes. The length is a refreshing change of pace, but it makes “Body Team 12” feel slighter than its competitors, a quick impression rather than an in-depth examination.

“Chau, Beyond the Lines”
The key to a win in this category has often been to take a heartbreaking subject but leave the viewer with a sense of hope. That is what Courtney Marsh and Jerry Franck have done with this tale of a disabled Vietnamese teen who aspires to become an artist and clothing designer despite the effects of Agent Orange that have left him with limited use of his limbs. It’s hard to watch scenes shot over eight years in a Vietnamese home for disabled children, but the lead character’s resilience (and devotion to his art) make this a real contender.

“Claude Lanzmann: Spectres of the Shoah”
Claude Lanzmann’s landmark 1985 documentary “Shoah” wasn’t nominated for an Oscar, but Adam Benzine’s HBO doc about the film and its director was. Benzine’s film tells a gripping story of how the French filmmaker worked for a dozen years to make his nine-hour epic. In a way, a vote for this film, which combines interviews with Lanzmann with outtakes from his film, could be seen as a way to pay tribute to the original “Shoah.” The only thing that could hold it back is the feeling that “Spectres of the Shoah” derives the bulk of its power from another movie.

“A Girl in the River: The Price of Forgiveness”
Sharmeen Obaid-Chinoy, who also directed the more joyful “Song of Lahore” last year, has made this HBO short about a Pakistani woman whose father and uncle shot her in the head and dumped her in a river because she’d dishonored the family by eloping with her boyfriend. The film is devastating and infuriating, both because of the shooting and because the young woman, who survived, must sacrifice her ideals to live in a community that tells her that her attempted murder is more acceptable than her father’s loss of “honor.” But that also means it leaves the viewer angry but without much hope.

“Last Day of Freedom”
The most unusual of the shorts is an animated doc based on interviews with a man who turned in his brother, a Vietnam vet suffering from mental health issues, after the brother killed a woman in a PTSD-induced panic. Some viewers find the animated format off-putting, while others find it highly emotional and effective.

Oscar outlook: The novelty of “Last Day of Freedom” gives it a shot, but it’s more likely that voters will either honor Claude Lanzmann and “Shoah,” or they’ll respond to the uplift and hope in “Chau, Beyond the Lines.” It’s hard to discount the appeal of a movie about the movies, though history suggests these voters might be a little more apt to go for “Chau.”