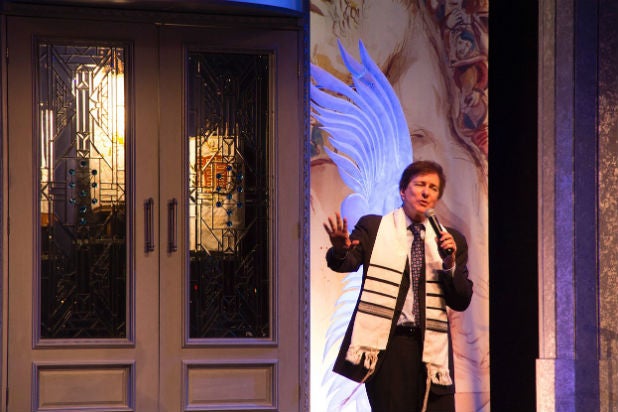 I remember years ago when I was part of a group fighting for motion picture and television industry health care. It was a contentious battle that pitted entertainment guild and union members against A-list actors and movie moguls, and family members of the elderly against medical and elder care professionals. I had carved out my own battle with my blogs, and was clearly over my head. The vitriol was pervasive, and difficult to shake. With every verbal Molotov cocktail that I slung, it seemed like a thermo-nuclear device was tossed back. I sought counsel, and it should have been in the guise of a defamation attorney. Instead I went to see a friend’s rabbi.

That rabbi was David Baron.

Here is a rabbi that was then, and still is, a fixture in the entertainment industry. His flock at Beverly Hills Temple of the Arts reads like the end credits of a summer hit movie. His sermons are focused on what is relevant to the lives of his congregation, and often addresses social issues that impact their lives. I remember his advice. It was as personal as it was genial. He slipped me the word. As I got up to leave, he shook my hand and asked “I’ll see you at Shabbat?”

I couldn’t say no. I had just received a 15-minute pep talk that could have come from Vince Lombardi, or maybe more appropriately Red Auerbach. A void in my life was about to be filled.

Also Read: Why Hollywood Should Not Support the Iran Deal (Guest Blog)

This was the start of a spiritual awakening that was inspired as much by the Rabbi and the music as it was by God. I did attend that Friday night service. It was held in at Saban Theatre on Wilshire [Boulevard in Los Angeles]. In this ode to art deco “golden age” of Hollywood architectural indulgence, Rabbi Baron took center stage, surrounded by a 5.1 Dolby system with a phalanx of suspended speakers that would make U2 salivate. I wondered why he needed so much audio firepower. I was about to find out.

This may be the only Temple whose musical director is a twice-Emmy nominated film, television and concert music composer. On that Friday evening, Sharon Farber had not only composed and orchestrated a beautiful, original composition based on Biblical text, but she actually wrote it for the unforgettable, haunting voice of Cantor Ilysia Pierce. Cantor Pierce was no slouch, and fit in seamlessly with this Hollywood crowd. A veteran of the stage with a list of credits that includes the lead in “Evita” and “Fiddler on the Roof,” Cantor Pierce is like Whitney Houston without the drug problem.

I might as well have been abducted by crazed Scientologists and put to work reading e-Meters. I had been indoctrinated by spirit, and seduced by music. Since that night, my life has never been the same. I sought salvation and inspiration and found it in the guise of a rabbi, a composer and a cantor. A spiritual trifecta!

For those few in the entertainment business who are not Jewish, High Holy Days is that part of the Jewish New Year where the atoning of sins is a heady cocktail of remembrance and forgiveness, and you had better be in Temple. Where I had once been dragged forcibly by my parents to attend High Holy Days services, now I looked forward to it.

On Rosh Hashonah and Yom Kippur, Rabbi Baron is as much impresario as he is clergyman. The harp polishers of my youth faded from memory as Rabbi Baron worked the congregation. I finally got what these holidays were about. And the music – it worked in harmony with the service, and encouraged all of us to soar.

It was during a Yom Kippur service at Temple of the Arts that I was introduced to Curt Lowens, a Holocaust survivor saved over one hundred Jewish children and rescued two American pilots during World War II. In typical fashion, the sense of drama and intrigued was not spared. Rabbi Baron introduced Curt to the congregation, told the story of his fabled rescue, and then, asked Curt to “turn around.”

On cue, the children and grandchildren of one of those pilots emerged from the wings of the stage and embraced Curt. Under the direction of Temple President and fabled defense attorney James Blatt, the Temple had located these people and flown them in. Then, individuals in the congregation stood to be recognized. They were a handful of the over 100 children that Curt had saved. The emotional power of that moment impacted all of us in a profound way. On the most spiritual day of the year, Rabbi Baron presented a man who changed the world. The inspiration hit me, as it did others, and marked this particular Yom Kippur as a day my life changed.

I’ve never been to a Yom Kippur service where a sense of drama and a commitment to production values is almost equal to the spiritual message. That’s why Temple of the Arts is a motion picture and television industry Temple. The passion of the congregation is mirrored by the passion of the clergy.

I’ve never looked forward to High Holy Day Services. My necktie starts to cut off the circulation in my carotid artery after the first hour. The endless standing and sitting becomes a spiritual aerobic workout, and the boredom is pervasive.

Not anymore. During this time where Jews are in the crosshairs of ignorance and our homeland is threatened with destruction, coming together as a community has never been so important. We are in a transitory time, rudderless in a sea of politics and division. I’ve found still waters that run deep, and the wind is at my back. I found my gurus, and the campfire where I can warm my spirit.

I hope you join me at Temple of the Arts of Beverly Hills. You don’t have to be in the entertainment business. I’m certainly not. You just have to be open to having your heart filled and your mind challenged. I found what was missing in my life. You might find it too.