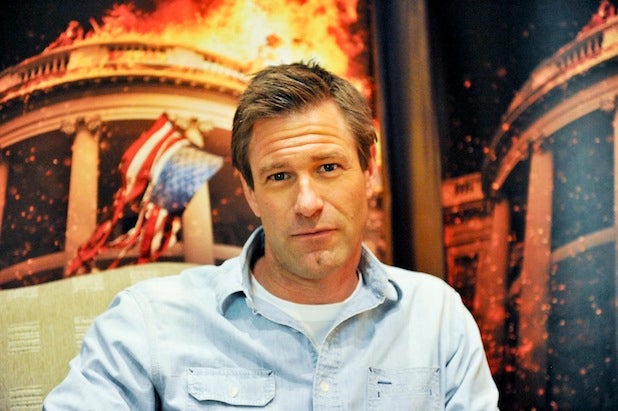 Aaron Eckhart is set to star in the psychological thriller “Fade Out,” which marks the directorial debut of “Arbitrage” producer Robert Salerno, it was announced Tuesday by producers Anthony Bregman and Naomi Despres.

Salerno will direct from an original screenplay by Pulitzer Prize winner Michael Cristofer (“The Bonfire of the Vanities”).

Eckhart will play a screenwriter who decides to recover from a nervous breakdown by spending his days in a tropical beachfront villa being cared for by his glamorous wife. He starts writing a new script about a jealous husband who murders his unfaithful wife, but his intense paranoia and hallucinations cause fiction and reality to blur. As the events in his screenplay appear to materialize, he becomes a suspect in his own wife’s disappearance and must outrun the police as he pieces together the puzzle seemingly designed by his very own mind.

Bregman (“Enough Said”) is producing under his Likely Story banner, while Despres is producing via Artina Films (“Kill the Messenger”). Production is scheduled to start in mid-February in Puerto Rico.

The Solution will represent international rights and introduce the project to buyers at the American Film Market this week. Producers are currently handling U.S. rights.

“‘Fade Out’ is as irresistible as a potent Caribbean cocktail: a twisted mind-bending thriller set in a sun-soaked beach town — from a smart script full of surprising twists, and with true artists in front of and behind the camera,” said Bregman.

“Aaron is a versatile actor who has shown immense range across his performances and is the perfect actor to bring the character to life in this Hitchcockian thriller. We’re delighted to be partnering with Bob Salerno on his directorial debut and debuting the project at AFM,” Wilson and Nestel said in a joint statement.

Eckhart is coming off a presidential turn in the hit action movie “Olympus Has Fallen,” which has grossed more than $160 million worldwide and led to an upcoming sequel titled “London Has Fallen.” He’s currently filming the horror movie “Incarnate” for Blumhouse Productions and will soon be seen in Lionsgate’s action-thriller “I, Frankenstein,” which hits theaters in January. He’s repped by CAA.

Also Read: Aaron Eckhart Is the Most Handsome Monster Ever in First ‘I, Frankenstein’ Trailer (Video)

Cristofer is currently developing a miniseries about the life of Catherine the Great for ABC and will be directing his own screenplay, “The Night Clerk,” next summer.