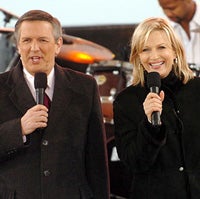 ABC News said late Tuesday that Charles Gibson’s last “World News” newscast will be on Dec. 18, and that the handoff to Diane Sawyer, whose first show had been scheduled for January, has now been moved up.

“I wanted to let you know that Charlie’s last day as anchor of World News will be Dec. 18,” Joe Banner, executive producer of “World News with Charles Gibson,” wrote in a blog post. "We’re going to spend a good deal of time during his final week on the air looking back at the stories Charlie covered, hearing again from some of the remarkable people he interviewed, and paying tribute to our friend and colleague, and the enormous contribution he has made to ABC News over the last three decades.”

Sawyer will become the second woman — alongside CBS’ Katie Couric — to anchor a network’s evening news. It’s a seat she has long coveted — even before Gibson got the gig.

An ABC rep told TVNewser that the “timeline has been moved up a bit” and that Sawyer will begin anchoring "very shortly after Charlie’s last broadcast."