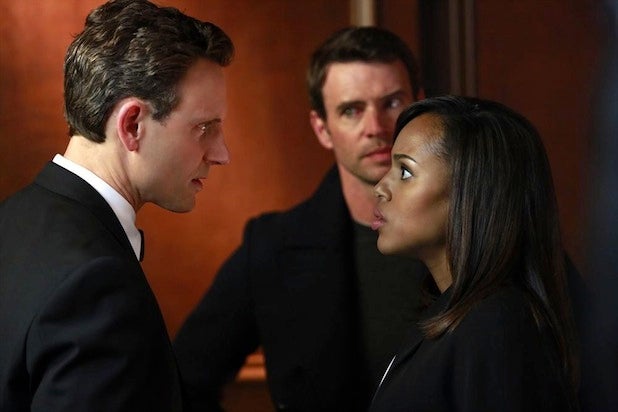 (Spoiler alert: Don’t read this if you don’t want to know what happened on Thursday’s episode, titled “The Price of Free and Fair Election.”)

ABC’s “Scandal” took a hammer to itself on Thursday’s season finale and in the process rebooted the show for its potential fourth season.

When star Tony Goldwyn, who plays President Fitzgerald, told TheWrap that the season finale “sort of reorders the ‘Scandal’ universe,” he wasn’t kidding.

Thursday’s season finale was a mixed bag. Some institutions were restored while others were totally dismantled.

Here are five crazy things that went down on Sunday’s season finale:

1. Fitz was re-elected, but it would mean two funerals.
Yes, Fitz is still president, but it was a hard-earned win. On the previous episode, Cyrus Beene (Jeff Perry) was willing to let vice president Sally Langston (Kate Burton) die in a bomb attack on a funeral she and the president were supposed to attend. But while he kept it to himself and delayed the president from leaving for the funeral, Jake (Scott Foley) intervened. As the funeral was being evacuated, Langston’s campaign director sent her back in to help the wounded. And as Olivia (Kerry Washington) put it, Sally was “canonized.”

Prepared to lose the election, Fitz took the stage with his family to make his final speech as president on Election Day. But then his son Jerry (Dylan Minnette) began to cough up blood and was rushed to the hospital. His death from bacterial meningitis would end up shoring up voter support for Fitz and win him the election. His son’s death was pinned on Olivia’s mom, Maya Pope (Khandi Alexander), but we learned later that it was actually her dad, Rowan Pope (Joe Morton).

2. Olivia flies the coop.
After she finds out that her mother was behind Jerry’s death – unaware that it was really instrumented by her father – Olivia decides that she’s the common denominator in all the painful things that happen to those she cares about. So, she takes her father’s offer to help her disappear. When Jake finds out, he asks her to take him with her. The two are last seen taking off on a plane when Olivia gets a call from the White House and doesn’t take it.

3. Huck has his family back.
Huck (Guillermo Diaz) and Quinn’s (Katie Lowes) love affair is discovered. In anger, Charlie (George Newbern) reveals the whereabouts of Huck’s wife and son in a hope that it drives a wedge between her and Huck. And it does. But in the end, Huck decides to knock on the door and tell his family he’s actually alive.

4. B-613 is back in business.
After helping Rowan capture Maya, Harrison (Columbus Short) realizes that the mastermind behind it all is actually Rowan. After confronting Rowan, Harrison finds himself on the wrong side of a pistol. Does Rowan have him killed? We don’t see that, nor do we hear a gunshot. My theory? Harrison joins Rowan’s, wait for it, reinstated B-613. Yes, B-613 is back with Rowan as its head.

As for Abby (Darby Stanchfield) post-OPA, who knows? She may team with boyfriend David (Joshua Malina) who has been given a parting gift from Jake: a bunch of files on, yes, B-613.

5. Fitz and Mellie form a new bond.
Olivia ends up telling Fitz that Mellie (Bellamy Young) was raped by Fitz’s father. That changes everything that has been creating a wall between them for the past 15 or so years. Fitz is still in love with Olivia, though, but he doesn’t feel he can leave Mellie after learning about the rape and then losing their son. Naturally.

But, Fitz doesn’t know that Olivia has left yet. You know what they say about the heart and distance.

Are you on board with all the changes? Tell us in the comments.