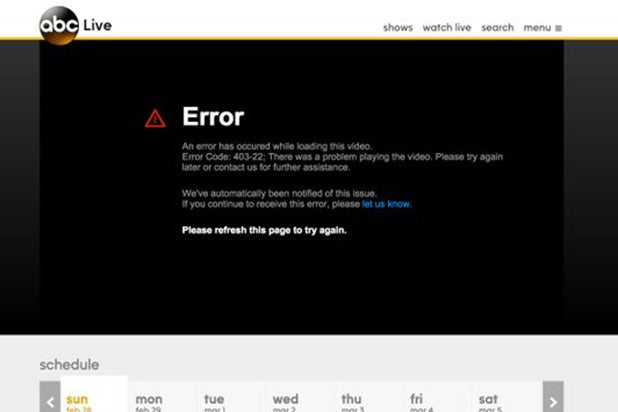 Trouble with ABC’s live stream of the 2016 Oscars sparked complaints on social media on Sunday.

The stream, which had limited availability, seemed to go down during host Chris Rock‘s opening monologue, displaying errors for some users trying to watch the awards show on ABC’s website.

“Huge shoutout for #abc live stream not working and making it impossible for me to watch the oscars,” wrote one frustrated user on Twitter.

The stream, on ABC’s website, was only made available to viewers in several major cities, and only with a cable subscription. Viewers outside of Chicago, Fresno, Houston, Los Angeles, New York City, Philadelphia, Raleigh-Durham and San Francisco were out of luck.

Twitter users who couldn’t legally watch the awards also voiced their frustration online as Disney and ABC shut down illegal streams, upset that they were left without a way to view the ceremony.

Anyone else having issues using the #Oscars #livestream?! pic.twitter.com/VRZ9Fo9vth

Can’t live stream, so I’m actually watching the #Oscars on Twitter. What a time to be alive.

for the first time in my life I’m actually glad the live stream is gone dead #Oscars pic.twitter.com/l9AKq8dzmC