In one of the first scenes in “Abortion: Stories Women Tell,” a pro-life religious leader exclaims to his congregation: “We now have the ability to look into the womb.” This important, comprehensive and heartrending documentary probes even deeper.

Director Tracy Droz Tragos (“Rich Hill”) explores a range of complicated emotions as women cope with increasingly diminishing rights over their own wombs. “Stories Women Tell” seeks to shows how multi-faceted the issue can be, while retaining a keen eye for regional specificity. Dozens of women — teenage to elderly — offer honest testimonies about their varying experiences surrounding terminated pregnancies. The result is a deeply personal film about the crisis in reproductive rights that manages to be even-handed, insightful and deeply moving.

For many of the women profiled, the shame, guilt and sadness associated with having had an abortion kept them silent. For some, this film is the first time they have spoken of having undergone the procedure, and none of them are demonized. Perhaps the only villains in the film are the loudmouthed male protestors who stand outside Hope Clinic in Granite City, Illinois, seemingly from morning to night, berating all who enter, holding up pictures of dismembered fetuses and exhorting people not to kill their babies. 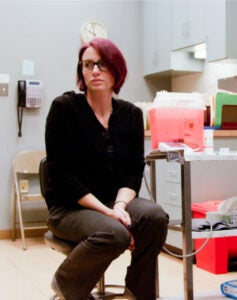 A down-to-earth security guard at the clinic wonders rhetorically about the home lives of the male protesters. “They have more time to be here worrying about somebody else’s business,” she observes. “They spend more time here than at home. Why don’t they go home?”

Jennifer, a teenager in braces, says simply: “I’m not ready to be a mom yet. It’s hard enough that I’m making this decision, then you have people making you seem like the worst person in the world.”

In this compassionate documentary, Tragos trains her camera lens closely on the faces of pregnant women, especially their eyes, which speak volumes. She also focuses on clenched hands and small physical gestures that might escape a less artful documentarian. She examines the situation in her home state of Missouri, one of many states that has significantly restricted access to abortions: only one clinic in the state remains open, and since 2014 patients who seek abortions must endure a 72-hour legally-mandated waiting period. Instead, women often travel hundreds of miles for treatment at Illinois’ Hope Clinic.

“Abortion: Stories Women Tell” underscores how widely the landmark 1973 Roe v. Wade decision remains under threat while also introducing us to the nurses, doctor, volunteers and patients at the aptly named Hope Clinic. There’s Dr. Erin, who is 7 months pregnant. Protesters have picketed outside her home. Still, she soldiers on. During low moments she picks up a journal offered by the clinic to the patients, and reads their grateful comments.

“I just think of myself as a gynecologist,” she says. “When I’m stressed or tired, I read what people write here and I’m reminded why we do this.”

But the subject is far from black-and-white. The issue is personal and fraught, and the film brings into sharp focus the many contours of the discussion. It doesn’t reduce the film to simple pro-choice vs. pro-life boilerplate. Rather, it seeks to humanize all sides.

Many of the women featured have chosen abortion to save the children they already have from financial hardship. One single mother supports two children on a job that pays her $3.67 an hour.

Women who chose not to have abortions are also profiled. Alexis is pregnant, and says simply: “I’m 17 and I’m having a little girl. She wasn’t supposed to be here till I was 30 when I’d be financially able and out of medical school.” Then there’s Kathy, who took up the gauntlet to fight abortion when she thought she saw a visible sign from God. To the filmmakers’ credit, her ideas are not belittled. Viewers can draw their own conclusions, sans editorial comment.

There are sorrowful stories like that of Sarah, who is married, 12 weeks pregnant and looked forward to having a baby. Then she found out her unborn child was missing limbs and his skull was unformed. She and her husband sought comfort from their pastor, who was supportive of their decision to abort.

Sorrow is intercut with terror in this frank documentary. “My son’s father would have beat the baby out of me anyway,” says D’Mari, who has no regrets about her abortion. Barb, a Hope Clinic nurse who is Catholic and has worked in the field for 40 years, doesn’t regard her service at an abortion clinic as antithetical to her religious beliefs. “I look at it as helping young women get on with their lives.” She resents the constant taunts by protestors implying she and the rest of the clinic’s employees are godless.

While this well-made film is unlikely to change minds on the controversial issue, by giving women an opportunity to recount their experiences, “Abortion: Stories Women Tell” should, at the very least, least touch hearts.