Ten months after the launch of a billion-dollar film fund designed to put Abu Dhabi on the moviemaking map, insiders in both Hollywood and Abu Dhabi are wondering whether the fund is a reality, and what the media strategy really is for the tiny, oil-rich territory.

In an interview with TheWrap, Borgerding said that this had resulted in four movie co-productions, and that others — such as a big-budget adventure picture written and directed by actress Madeleine Stowe — were in the pipeline. 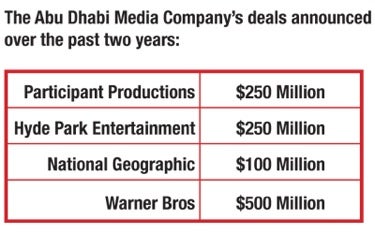 But the largest deal of all, a broad, $500 million Warner Bros. deal, announced in 2007 as an “unprecedented, long-term, multi-faceted strategic alliance” aimed at the “digital transformation” of Abu Dhabi, appears to be stuck in neutral.

Asked if the agreement was proceeding as planned, one senior Warner executive, speaking on condition of anonymity, said, “It’s kind of not. We don’t know exactly where we stand. It’s been difficult to nail down, they’ve been cryptic in communications. We were all assured that there would be more answers.”

Just one film co-financing deal has come to pass — the upcoming 3D “Shorts,” by Robert Rodriguez — and apart from some videogame coproduction ("Speed Racer," "Looney Tunes"), it’s not clear what the collaboration has yielded so far.

Borgerding shrugged off any notion of the alliance having unraveled when asked at the Cannes Film Festival about the Warner Bros. deal.

He added: “People in the cheap seats are barking. But we’re doing movies, videogames, developing a theme park. It just seems to be a bunch of people ragging that things are not happening as fast as they want — so what?”

“They came back to us and said they’d like to figure out if a film fund makes sense,” said one executive.

Meanwhile, others question the choices that have been made by the fund thus far, and wondered what the goal of the co-financing arrangements is. Participant Productions, funded by billionaire Jeff Skoll, does not have the stature of a major studio and is hardly in need of capital.

Asked by TheWrap last fall what kind of movies Abu Dhabi intended to make, Borgerding said: “I’m looking for movies that will make money. We’re going to try to make commercial movies. I think there will be a wide gamut of genres. We are looking for the right stories, told the right way.”

Now Hollywood power players are wondering if that’s really the case. Last month at the Cannes Film Festival, Imagenation announced its financing of two movies with Participant: a remake of “The Crazies,” a 1974 film by George Romero about the contamination of the water supply of a small town, to be directed by Breck Eisner. The other is called “Furry Vengeance” and stars Brendan Fraser as a man in the Oregon wilderness fighting for homesteaders’ rights.

“They’ve made odd choices,” said one major studio chief, who declined to speak for attribution. “They’re not making Middle Eastern movies. They don’t have Arabic themes. They’re not driven commercially, or artistically. There seems to be no rhyme or reason to it. What’s the theory?”

And even inside the emirates, figures with film experience say they don’t get the plan.

“Why would I spent $100 million on National Geographic? Are they building a zoo? Abu Dhabi has a lot of money, but they have no clue what they’re doing,” said one prominent producer. “The vision is blurry.”

Abu Dhabi, along with Dubai, has made an ambitious bid to become a media behemoth in the Middle East, earmarking billions of dollars for television, film and news media production, including the building of entertainment theme parks, movie studios, television production space along with the founding of channels and filmmaking initiatives.

The global economic crisis has put much of the construction plans on hold in both emirates. “Nothing is moving forward,” said the producer, who works between the emirates and Los Angeles. “Dubai Studio City is on hold, so are the theme parks.”

Borgerding insisted that all the naysayers would be disproved within a year. “We’re stronger today than we were a year ago,” he said. “It’s all happening.”