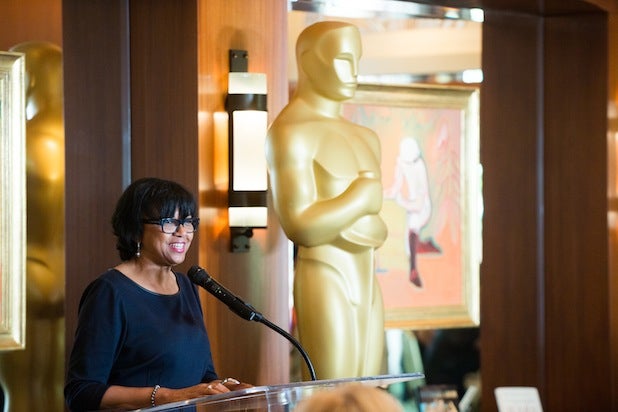 The Academy of Motion Picture Arts and Sciences is considering cuts and changes in many of its educational, grant and internship programs, drawing protests from members and some of those who have been the beneficiary of those programs over the years.

For a while, the pages on the Academy website where applicants would normally apply for grants contained the message, “The Academy Education, Film Festival, Internship and Film Scholars programs are currently on hiatus for the upcoming year … We thank you for your interest and look forward to collaborating again.” When the new Oscars.org was unveiled on Oct. 9, those pages were missing.

“We’re taking this year to re-evaluate some of our grant-giving to ensure that each of these programs has the greatest benefit to the Academy and the communities it serves,” an Academy spokesperson told TheWrap. “No organization supports film education, programming and emerging talent more than the Academy – it’s part of our core mission and always will be.”

A number of Academy members with knowledge of the proceedings told TheWrap that the AMPAS Board of Governors has voted to reconsider Academy grant, film festival and internship programs – and while final decisions on the fate of those programs have yet to be made, the Student Academy Awards and the Nicholl Fellowship program for aspiring screenwriters may be the only programs left untouched.

One member involved in the discussions suggested that the changes are tied to the Academy Museum of Motion Pictures, which is due to break ground next year and open in 2017.  “The museum has had a huge impact on Academy resources,” said the member of its effect on the grant programs, which together total slightly more than one percent of the Academy’s total expenditures.

“To many of us, the slogan ‘one percent for scholarships and grants’ seems modest,” Academy member and Academy Film Scholars co-founder Mitchell Block, who is lobbying to retain the programs, told TheWrap this week.

According to the Academy’s most recent annual report, revenue in 2013 was more than $134 million, the vast majority (almost $94 million) coming from the Academy Awards and related activities. The Academy’s total expenditures were slightly more than $97 million, of which $1.2 million consisted of “grants, contributions and awards.”

To protest one of the proposed cuts, a group of nearly two dozen film historians and academics have written a letter to the board, asking it not to discontinue the 15-year-old Film Scholars program.

The 22 signatories are all past grant recipients whose research on various aspects of Hollywood history was partly funded by the program, which has been offering $25,000 grants to two scholars each year since 1999.

“Publishing serious film history is more challenging than ever,” reads part of the letter, a copy of which was obtained by TheWrap. “Like the film business, publishing seems slanted to the few blockbusters; consequently, the serious independents are left floundering for support. Your scholarships can make all the difference … We urge you to continue this vital program.”

With only two $50,000 in grants per year, the Academy Film Scholars program is a minor part of the Academy’s annual support of educational programs, film festivals and internships.

The potential cutbacks come as the Academy is gearing up for the homestretch of its capital campaign to raise money for the museum. The goal is $300 million, of which more than $200 million has already been raised.

Although construction has not yet begun on the work that will turn the old May Co. building next to the Los Angeles County Museum of Art into a lavish museum, the Academy last week launched its first exhibition in the space, a costume-design exhibit entitled Hollywood Costume.

The Academy Film Scholars letter, in its entirety:

Dear AMPAS Board of Governors:

As awardees of grants from the Academy’s Film Scholars Program, it has come to our attention that there is talk of ending the program. We want to take this opportunity to tell you how important the program has been to us, how important we believe it is in the community of film historians, and the positive impact the scholarships have on calling attention to all that the Academy preserves and promotes, as well as raising the bar of film history.

Publishing serious film history is more challenging than ever. Like the film business, publishing seems slanted to the few blockbusters; consequently, the serious independents are left floundering for support. Your scholarships can make all the difference. Publishers recognize the importance of the Academy Film Scholars Program and when we have been awarded a scholarship from the Academy, our work is taken more seriously.

Such works serve to provide advanced and specific attention to neglected and/or underrepresented artists, genres, issues or crafts; they also bring attention to the Academy’s mission and success beyond the Oscars.  The ripple effect may not be as immediate or quantifiable, but the works supported by the scholarships leave a legacy to future generations of filmmakers, researchers and movie-lovers as well.

Just as the Academy Award is the goal of filmmakers, the Academy Film Scholarships haves grown in importance in the academic community, averaging 100 applications a year. We can only imagine the amount of work this means for staff as well as the volunteer committee of Academy members. Yet this application process calls attention to the Academy’s research facilities and the importance of the preservation work the Academy promotes. With the Margaret Herrick Library, the Academy has created and maintained one of the preeminent libraries and archives in the world and the Scholars Program is a natural way to promote the Academy, the Library and their missions.

For those of us fortunate to be film scholar’s grants recipients, the Academy has added our name to a list that we are as proud to be included among, as we believe those receiving Oscars over the years must be.  To continue adding to this list will only enhance the Academy’s legacy as an institution that not only recognizes excellence, but also fosters meaningful scholarship, a long-term view of film culture, and the importance of preservation not only for history, but for re-evaluation as well.

Again, let us take this opportunity to thank you for all your contributions to preserving film history. As we write this, the application is still up on the Academy website and we know fellow scholars who are in the process of applying for this next year. We urge you to continue this vital program.