The Oscars’ Best Animated Feature category seems likely to have a full slate of five nominees for the third year in a row – and this time, those nominations should be in the hands of far more voters than in years past.

In a significant change to the way nominations have been made in the category, voters on the nominating committee will now be able to view the eligible films on screeners, rather than having to attend special screenings at the Academy.

The change could significantly expand the number of members who vote on nominations. In the past, the volunteer committee that made the nominations numbered 100, divided evenly between members of the Short Films and Feature Animation branch and members of other Academy branches.

But because committee members needed to see 80 percent of the eligible films for their votes to count, some insiders who closely follow the process estimate that the actual number of voters who participated was fewer than 100, and perhaps as low as 40.

Under new rules, the committee will be expanded beyond the usual 100, and members will be allowed to vote if they view the films on screeners rather than attending the special Sunday-night screenings in Beverly Hills, which will still take place. In addition, their votes will count if they see 66 percent of the entries, not 80 percent.

Rather than scoring the films on a scale of 6-to-10 on the spot at the screenings, committee members will be provided with mail-in ballots to record their scores. Online voting will not be used.

TheWrap has counted 13 films scheduled to qualify for the award, with a number of potential additional entries. If the field stays at 13, it will yield four nominees, provided enough films meet the minimum score required for a nomination. But if three additional films enter, which seems probable, the number of possible nominees will jump to five, a number that was only reached once in the first eight years of the category’s existence, but three times in the last four years.

Last year, the five nominees came from a field of 21 qualifying films. (The large number of films, along with the requirement that voters see 80 percent of the eligible films, meant that committee members needed to see 17 films before their votes counted.)

The old system, which relied on a small number of voters who were often craft-minded, and required all films to be seen on the big screen, was thought to help past nominees like “The Secret of Kells,” “A Cat in Paris,” “Chico & Rita” and “The Pirates! Band of Misfits,” which might otherwise have been lost amidst the bigger studio productions.

Although many in the animation community are not yet aware of the new system, some of those who know about it are approaching it with caution, worried that it may favor the bigger films.

Another huge question: How will voters get the screeners? Will the Academy send them to all voters on the committee, or will they expect the film companies to do that? The latter would seem to require AMPAS to release the names of the committee members, a step they virtually never take.

Unless all committee members receive screeners of every qualifying film, the 66-percent requirement would likely mean that members outside of Los Angeles would be hard-pressed to see enough films for their votes to count.

As for what will be competing for nominations, the 13 films that seem set are Pixar’s “Monsters University,” Disney’s “Planes,” “Frozen” and “The Wind Rises” (the latter from Japan’s Studio Ghibli), DreamWorks Animation’s “The Croods” and “Turbo,” Blue Sky/Fox’s “Epic,” Universal’s “Despicable Me 2,” Sony’s “Cloudy with a Chance of Meatballs 2,” Rainmaker Entertainment/Weinstein’s “Escape from Planet Earth,” Reel FX and Relativity’s “Free Birds,” and “Ernest & Celestine” and “A Letter to Momo” from GKIDS.

Also read: ‘Despicable Me 2’ is Universal’s Most Profitable Film Ever

Fox is distributing BBC Earth’s “Walking With Dinosaurs” in December, but the company will likely not submit it in the Oscar race. “Smurfs 2” was released by Sony over the summer, but the first Smurfs movie was rejected by the Academy for not meeting the requirement that animation/live action hybrids be 75 percent animated. Another GKIDS movie, “Approved for Adoption,” will fall victim to that same rule, according to the distributor.

Other potential entries include the South African comedy “Khumba,” Studio Ghibli’s “The Tale of Princess Kaguya,” Phase 4 Films’ “The Legends of Sarila,” the Spanish film “Foosball,” the Brazilian “Rio 2096: A Story of Love and Fury,” the Russian “Snow Queen” and the Weinstein Company’s “Leo the Lion.”

As usual, the animated field contains more box-office powerhouses than the Best Picture contenders: “Despicable Me 2” is the year’s second-highest grossing film in the U.S. at $361 million, “Monsters University” is fourth at $266 million, and “The Croods” is the year’s top-grossing original film (as opposed to adaptations and sequels) at $187 million. 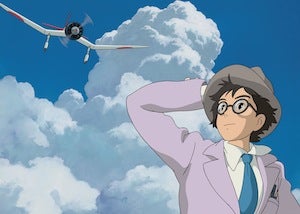 Reviewers, though, have not embraced this year’s crop so enthusiastically. Hayao Miyazaki‘s “The Wind Rises” (right) has the highest Rotten Tomatoes rating, at 80 percent positive, followed by “Monsters University” at 78, “Despicable Me 2” at 76 and “The Croods” at 69.

For now, the biggest contenders appear to be “Frozen,” “The Croods,” “Monsters University” and “Despicable Me” among the bigger titles.  GKIDS’ “Ernest & Celestine” has picked up raves from overseas, while a real question mark surrounds “The Wind Rises.”

That film is the final feature from a true animation pioneer, Miyazaki, who won an Oscar in 2002 for “Spirited Away,” and it is visually dazzling – but its central character is the aircraft designer responsible for Japan’s Zero fighter plane in World War II, which may make it tough going for some American viewers.

On the other hand, it doesn’t have to appeal to everybody – just enough of the Academy’s newly expanded animation committee to make it to the next round.

UPDATE: Additional information continues to come in about this year’s animated submissions. Since the story was originally published, TheWrap has learned that Bill Plympton‘s “Cheatin'” will not be finished in time for a qualifying run, and that GKIDS’ “Approved for Adoption” will not be eligible. The story has been changed to reflect that information.