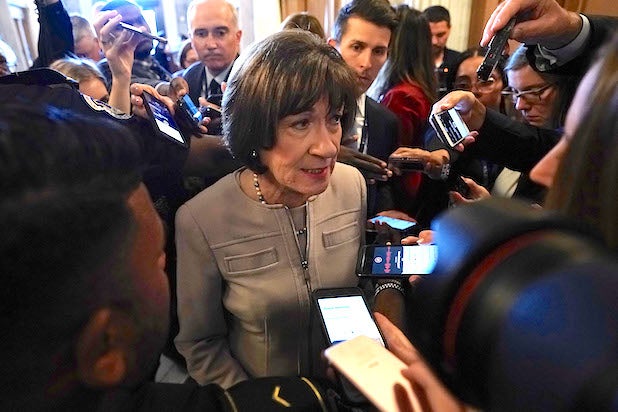 Sen. Susan Collins made it official on Friday, saying toward the end of a lengthy speech on the Senate floor that she would vote to confirm Judge Brett Kavanaugh to the United States Supreme Court.

“I will vote to confirm Judge Kavanaugh,” she said offering a robust (and nearly hour-long) defense of his personal and professional record.

The decision was a blow to #MeToo activists hoping that Collins would provide a critical vote against Kavanaugh. On Twitter many complained bitterly about Collins and other “white women” in the Republican Senate caucus, who they accused of selling them out.

“The way white women accept to be used as pawns by a party that consistently strips their rights and minorities’ rights away cannot be overstated,” said Vox host Liz Plank.

Also Read: 'Morning Joe' Says Sarah Huckabee Sanders Has 'Been Made Rotten to the Core' by Trump Presidency

The way white women accept to be used as pawns by a party that consistently strips their rights and minorities’ rights away cannot be overstated. pic.twitter.com/V2qCpee1Ug

Susan Collins was always the 53% of white women. She always will be.

This is how white supremacy works.

another day, another reminder that white women will happily benefit from the activism of black women only to turn around and back the white patriarchy pretty much every time

Susan Collins voting for Kavanaugh is the perfect snapshot of white women bringing Trump and his administration over the finish line.

The decision from Collins all but assures that Kavanaugh will be confirmed to the United States Supreme Court by what is expected to be a razor thin 51-49 margin. The vote is expected to run almost totally along party lines, with West Virginia Democrat Joe Manchin defecting from his party by also saying he would vote “yes” on Kavanaugh while Republican Lisa Murkowski split from her side as well by announcing she would vote “no.”

Kavanaugh has denied every accusations leveled against him, testifying under oath last month that he had never committed any act of sexual misconduct toward anyone.