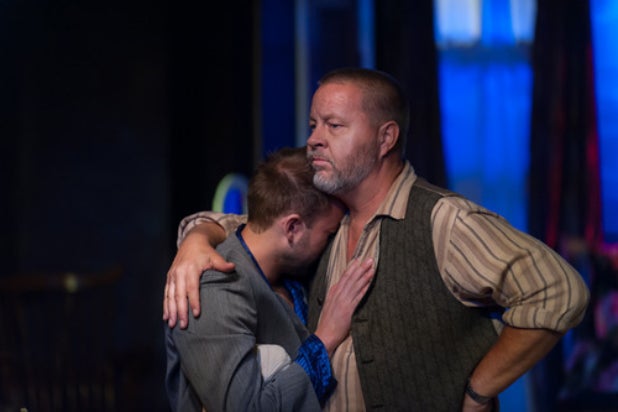 An actor in a Santa Clarita, Calif. production of “Cat on a Hot Tin Roof” was fired Saturday after physically removing a heckler in the audience who lobbed anti-gay slurs at the cast for nearly half of the show.

John Lacy, who played Big Daddy in Tennessee Williams‘ classic play that tackles homophobia among other themes, was fired after jumping off stage and physically confronting an audience member who repeatedly made noise and yelled “fag” during emotionally tense scenes, according to audience members’ accounts of the incident on Facebook.

The show apparently continued following the confrontation and concluded to a standing ovation. Lacy was apparently not let go until after the performance.

Lead actor Anton Troy resigned in solidarity with Lacy, writing on the social networking site that the show’s producers should have handled the unruly patron, who had apparently been drinking before the show and returned to the audience after consuming more alcohol during intermission.

“I will not support homophobia or an establishment that doesn’t support its talent,” Troy wrote. “Hate in any form is not something I choose to subscribe to. John is a seasoned professional and an honorable man. It should never escalate to a point where the talent has to handle an unruly drunk in the audience themselves regardless of the outcome. Producers dropped the ball, the fish stinks from the head on down.”

Troy resigned to show support for his castmate, but not all of Lacy’s fellow actors agreed with his decision to confront the heckler.

“I, unlike most of you, am NOT proud to be an actor today,” cast member Missy Kaye wrote in a since-deleted Facebook post in response to Troy’s resignation.

“By you jumping off the stage and putting your hands on this guy put the whole theatre in jeopardy, cast and audience, and to me that is unforgivable,” Kaye added.

“What if this guy had a weapon? Did that cross your mind?”

Fellow actress Emily E. Low, who plays the female lead, agreed that violence should not have been the answer, adding that part of acting is accepting criticism from the audience.

“As actors we must take the positive audience responses with the negative. It’s not always about cheers and standing ovations,” she wrote in the same Facebook thread before deleting the post.

Low added that Troy’s character, Brick, is gay, suggesting that the heckler’s anti-gay slurs may have been appropriate.

“And, the truth is, Brick is, after all, a gay man,” she wrote. “The material is strong, and it elicits strong responses from an audience, different every night.”

The Repertory East Playhouse in Newhall said Monday that its managers had not been made aware of the situation at the time, or else they would have intervened.

“The management of the REP regrets that this situation was not brought to their attention sooner and would like to assure future audiences that disruptive behavior, including disparaging remarks from the audience, incidents of bullying or hate speech, and racial, discriminatory or homophobic utterances, will not be tolerated and offending parties will be asked to leave the theater,” REP said in a statement.

Also read: ‘How to Train Your Dragon’ Character Comes Out as Gay, Director Confirms

The run of “Cat on a Hot Tin Roof” had been suspended Monday and the original performance schedule would not be completed due to cast loss from “an incident during the May 31 performance.” Because the play was slated to run for just two more weeks, the theater said, there was insufficient time to recast the two vacated roles.

UPDATE 6:47 p.m.: Actress Emily Low told TheWrap that her comments about the content of the play involving a gay man were not intended to suggest the heckler’s anti-gay slurs were in any way justified.

“I was just trying to say that sometimes people are — sometimes you’re gonna have those people in the crowd who don’t understand that this is a high piece of art, or people who come into the show and don’t even realize that it’s a story about a person who’s struggling with being gay,” Low said.

Those people may have the type of inappropriate reaction the heckler had out of hatred or ignorance, but the job of the actor is not to engage with them physically, Low added.

“I disagreed with things being dealt with violently, that’s all that it is,” she said.”

“My mother is gay. To be called a homophobe, or to be put on the side of a homophobe … it just breaks my heart,” Low added.

The actress said she supports her castmate John Lacy and does not believe he should have been fired, but she disagreed with the violent steps he took. Low said lead actor Anton Troy mentioned to Lacy during intermission that the heckler made him uncomfortable, but that Troy should have made those feelings known to the producers.

“Anton chose not to inform the producers; he informed John, and of course John got upset,” Low said.

Low also dispelled rumors that have arisen since TheWrap’s initial report Monday afternoon that the man was part of a group of her friends, or that he was her boyfriend.