Celebrities love a worthy cause, which perhaps explains why a dozen of this town’s better known film and television actresses made a pilgrimage to the Skirball Center Monday to stand up and be counted as people who care about women’s health and education on the African continent.

The event was a conference bringing together the wives of 15 of Africa’s political leaders with Melanne Verveer, President Obama’s ambassador-at-large for global women’s issues, and a clutch of nongovernment (NGO) groups including U.S. Doctors for Africa. 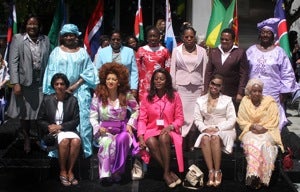 For the organizers, the allure of the celebrities was clear: to attract the local media, especially television, who turned out in thick clusters. Quite what the celebrities themselves thought they were up to was less clear.

“I’m here primarily to learn and to be a witness to a wonderful exchange of information,” said a less than confident Diane Lane, looking elegant in a blue summer dress and straw hat but thematically sounding way, way out of her depth.

She rambled uncertainly about the work of NGOs being a “Catch-22” on the African continent (for reasons she couldn’t entirely explain) and called for something she called “self-sustenance," before finally acknowledging she had been to Africa precisely twice — once to Rwanda last year and once to South Africa long ago. Asked what she and her fellow actresses could contribute to the cause, she pointed to the African first ladies and said: “They know how best we can serve them.”

Some of Lane’s fellow performers were happy to admit they were not exactly experts in the field. “This is one of those opportunities to learn rather than lead,” said a delightfully understated Amy Brenneman, who has never been to Africa at all. Asked what brought her to the event, she smiled broadly and answered: “My friend Maria Bello told me to come, and I always do what she asks.”

Bello, admittedly, was rather better informed, as was Joely Fisher, who serves as an ambassador for Save the Children and recently shot a public service announcement in Mozambique to try to encourage Americans to donate $28 a month — money she calls the “latte fund” — to the charity.

As a group, though, they were clearly happy to be associated with education, health and the fight against HIV but rather less happy at the suggestion that some of the first ladies represented governments with nasty reputations for brutality and corruption.

Lane called the corruption question a “tricky conundrum." Bello said the idea was to “focus on the positive," at least initially, in the hope that over several years a more frank discussion might evolve. Brenneman, once again proving disarmingly honest, admitted she didn’t know quite how she was supposed to broach the conversation. “I don’t know what the goal would be,” she said.

For once, the Hollywood crowd were not the princesses of the moment. Robin Wright Penn turned up in an tatty pair of plaid pants and Converse sneakers. But even the most elegant of the actresses could not compete with the pink and ivory designer suits, gold jewellery and shimmering handbags of the First Ladies.

The whole event felt, at times, like a scene from "Coming to America." PR flacks in black suits and Hermes scarves held parasols over the African ladies on the podium to shade them from the 90-degree heat, while event organizers did all the talking at a so-called news conference where reporters were not allowed to ask a single question.

Was this really an event that Hollywood’s liberal elite could be proud to be associated with? Diane Lane spoke words truer than perhaps she realised when she said: “All I can bring to this is the fact that you are willing to put a microphone to my mouth.”