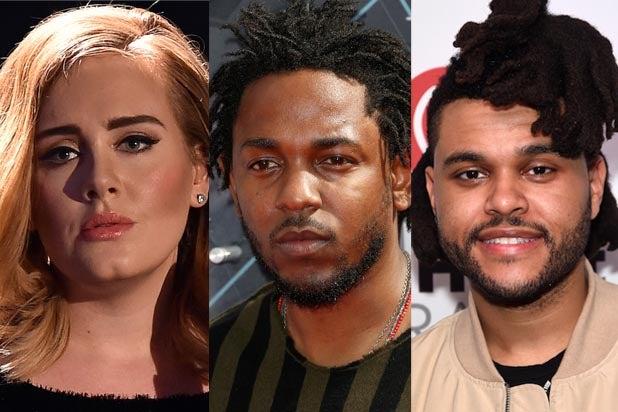 It was probably already a foregone conclusion for most music fans, but expect Adele to blow viewers away during the Grammys next month.

CBS announced on Wednesday that the “Hello” singer would be performing during the 58th Annual Grammy Awards on Feb. 15, along with The Weeknd, Kendrick Lamar and country band Little Big Town.

Additionally, the Recording Academy will pay tribute to Lionel Richie as the 2016 MusiCares Person of the Year.

More performers will be announced within the coming weeks, the network said.

Lamar racked up the most Grammy nominations this year with 11, including Album of the Year for “To Pimp a Butterfly.”

Although Adele’s third studio album, “25,” was released to critical acclaim and massive sales, fans will have to wait until 2017 to see her sweep the Grammys because “25” wasn’t eligible this year. The Grammy eligibility period for the 2016 ceremony extended from Oct. 1, 2014, to Sept. 30, 2015, and “25” was released on Nov. 21. Previously, Adele won a total of 10 Grammys, and she is no stranger to performing during the event.

The Weeknd, however, will be making his Grammy performance debut this year. The breakout artist of 2015 is nominated for seven Grammys, including Record of the Year for “Can’t Feel My Face,” Album of the Year for “Beauty Behind the Madness,” and Best Song Written for Visual Media for “Earned It,” a song featured on the “Fifty Shades of Grey” soundtrack.