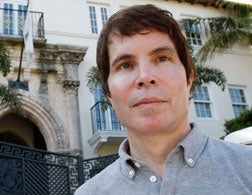 Gerald Posner — the former Daily Beast investigative reporter who resigned from his post earlier this year after admitting to plagiarism — has hired Mark Lane, an attorney and author, to prepare a lawsuit against the Miami New Times over recent stories about Posner.

Lane sent a letter to Miami New Times’ editor Chuck Strouse threatening litigation: "I have consistently opposed bullies even when they attack colleagues with whom I disagree.” (Lane and Posner became friends on the literary circuit after both wrote books with differing accounts on Kennedy assassination.)

The paper is one of several sources Posner was alleged to have stolen passages from.

Representatives for Village Voice Media, which owns the Miami New Times, could not immediately be reached for comment.

Here’s the key portion of Lane’s letter, via Romenesko:

"Let us examine the facts. As soon as the first accusations were made about him as an investigative reporter, Mr. Posner admitted his errors, apologized and resigned from his position. As further allegations were made about a book he had written, he promised to correct all errors, apologized again, conducted his own diligent review and promised to correct all transgressions. Now, an apparently well financed campaign is being launched to review other books previously written and to contact a publisher with a thinly veiled suggestion that his book be withdrawn from publication, even before Mr. Posner was given the opportunity to make called-for revisions. Clearly, apologies and efforts to correct errors do not absolve authors from responsibility and it is appropriate to point that out. However, the goal of responsible journalists cannot be the destruction of a career. And long drawn out death by a thousand cuts is inappropriate and, in my view, unsupportable.

Most egregious was the email letter dated May 5, 2010, from Tim Elfrink, your staff writer for Miami New Times to Mr. Posner’s publisher, Random House, making exaggerated charges of plagiarism and seeking to know what the publisher was going to do about it. That letter and other actions constitute tortious interference with a business relationship, tortious interference with a contractual relationship, intentional infliction of emotional distress and negligent infliction of emotional distress. A leading relevant case, Gerber v Keyes, was decided by a Florida appellate court and New York State ruled in a similar fashion in Wegman v Dairylea Cooperative, Inc.

Mr. Posner is prepared to file a complaint and seek immediate discovery as to the basis and support for the campaign to destroy his opportunity to work in his profession.

I do have one further suggestion. Since the issue of the search for the truth may be of interest to you and since, as you must know, a committee of the United States Senate years ago and then again more recently, concluded that the CIA, the FBI and other intelligence agencies have assets pretending to be journalists embedded in the major news media, that might be a subject that could attract your attention.  Unlike the Posner affair in which no one was harmed, it is that use of the media and the publishing houses that is a threat to our democracy and impedes our right to a free press pursuant to the unambiguous mandate of the First Amendment. That is a campaign that many of us could support, endorse and relish. Our country needs muckraking journalists who can recognize muck worth raking when they see it."

UPDATE: The Times says no lawsuit has been filed. And here’s Strouse’s response:

"We’re delighted to have Mr. Lane, an 83-year-old Jonestown survivor, involved. We clearly have nothing against Mr. Posner, though we despise his admitted serial plagiarism. New details on this egregious literary theft — which is crystal clear — will be published soon."