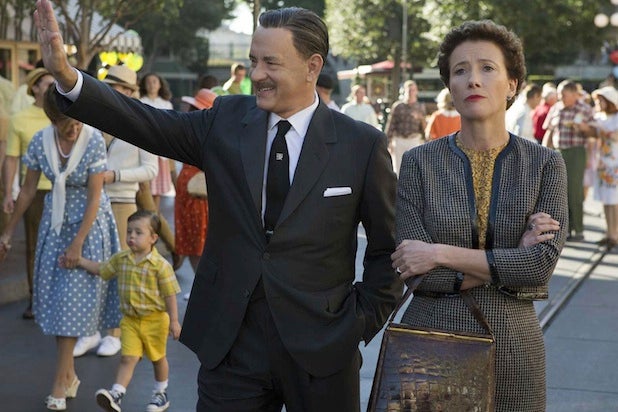 The American Film Institute’s AFI Fest, with its program that mixes gala celebrations of major-studio awards contenders with a full lineup of international arthouse films, is a festival with a split personality.

On one hand, Disney’s “Saving Mr. Banks” will open the festival at the TCL Chinese Theater (formerly Grauman’s Chinese), where the movie whose story it tells, “Mary Poppins,” premiered nearly 50 years ago.

On the other hand, an array of challenging films like “Borgman,” “Like Father, Like Son” and “Heli” are scattered throughout the screening schedule, with more than a dozen official entries in the Oscar foreign-language race and a number of films that would otherwise never see the inside of the Chinese 6 multiplex Hollywood.

On one hand, the festival will showcase such stars as Tom Hanks, Emma Thompson, Christian Bale, Meryl Streep, Julia Roberts, Bruce Dern, Mark Wahlberg and Ben Stiller, many of whom will walk the red carpet in front of the Chinese.

On the other hand, the AFI Fest’s guest artistic director is French New Wave icon Agnes Varda, a 85-year-old director whose work is thoroughly un-Hollywood.

But when TheWrap asked festival director Jacqueline Lyanga if she thought her fest was a bit schizophrenic, she immediately responded, “Definitely not.”

Added Lyanga, “I think if you look at any major international festival, you’ll find a bunch of big studio features and international cinema. All the big festivals have red carpets, because it helps bring attention to the festival and makes for a really powerful combination.”

At AFI Fest, the combination is also irresistible to awards campaigners, which is why “Saving Mr. Banks” is the opening-night film, the Coen brothers’ “Inside Llewyn Davis” is the closing-night event, and every night brings a gala of a movie that hopes to figure in the awards race.

There’s “August: Osage County” on Friday, “Out of the Furnace” on Saturday,  “Mandela: Long Walk to Freedom” on Sunday, “Nebraska” on Monday, “Lone Survivor” on Tuesday, “The Secret Life of Walter Mitty” and “Her” on Wednesday.

Another curious wrinkle: The American Film Institute is set up to honor, as its title suggests, American films. The AFI’s annual list of the year’s 10 best disqualifies movies made by non-American filmmakers to focus on homegrown art – but the festival it runs is long on foreign films, with more than half of the program not in English.

“American filmmakers have always influenced international filmmakers, and vice versa,” said Lyanga. “Agnes Varda and the French New Wave had great influence on many American directors, but they were influenced by American movies themselves. There’s a great cross-pollination that happens in cinema.”

Coming at the end of the year, the AFI Fest deliberately picks films from across the entire year’s festival landscape. The lineup includes “Breathe In” and “Charlie Victor Romeo,” which first screened at Sundance; “My Dog Killer” from Rotterdam; “Gloria” and “The Child’s Pose” from Berlin; “The Rocket” from Tribeca; “Awful Nice” from SXSW; “Grand Central,” “Heli,” “The Past,” “The Great Beauty” and “The Missing Picture” from Cannes; “Exhibition” from Locarno; “Bethlehem” from Telluride; “Half the Yellow Sun” and “The Green Inferno” from Toronto; and “Walter Mitty” and “Her” from New York, among many others that were cherry-picked from a year of AFI Fest programmers hitting other festivals.

Tickets are free, courtesy of chief sponsor Audi, though that doesn’t mean they’re always easy to get your hands on. (Paying for passes is also an option.) Last year’s festival drew about 75,000 people, which Lyanga called “the perfect number,” though she expects an expanded slate of conversations to increase attendance this year.

And will there be another “Secret Screening,” an AFI staple that in the past few years has included David O. Russell’s “The Fighter,” Steven Soderbergh’s “Haywire” and last year’s James Bond movie “Skyfall”? Lyanga would only say, “possibly.”

Warning: If there is, it won’t be Russell’s “American Hustle.” The director will be the subject of a tribute on Friday night at the Egyptian, and the festival has promised to show clips from “Hustle” as part of that tribute – but as for a surprise screening of the entire movie, all signs say it’s not happening.