I pity the fool who has to sit through this movie. Oh, wait, that would be me.

“The A-Team” is 117 mind-numbing minutes of massive explosions, car smash-ups and gun battles, with the merest occasional passing whiff of plot, character development or decipherable dialogue.

It exemplifies everything that’s wrong with costly summer movies. 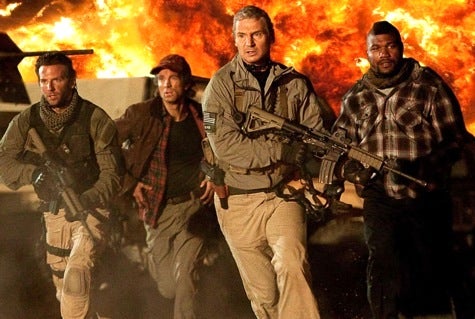 It’s big, loud and totally pointless. That would be OK if it was at all entertaining or even cheesy fun but, except for a sly performance by Patrick Wilson as a weaselly CIA agent, it’s one big, eardrum-shattering snooze.

Think of last summer’s “Transformers: Revenge of the Fallen” and “G.I. Joe: The Rise of the Cobra,” and you get the idea.

And coming as it does on the heels of the box office disappointment that is “Prince of Persia: The Sands of Time,” it also points up to the current lack of leading men boasting the macho oomph to transform an action film into a viable franchise.

In his prime, Bruce Willis could take dross and turn it, if not into gold, at least into something glibly glittery. “Die Hard” and its successors were perfect Saturday night movies, made up of equal parts laughs, suspense, explosions and — this may be key — bravado.

The same goes for the action hero movies Arnold Schwarzenegger and even Sylvester Stallone churned out. While with only a couple of exceptions – “Rocky,” the “Terminators”  — none were great movies, you never questioned the authority or authenticity of their stars.

That cannot be said of “A-Team,” which features a buff Bradley Cooper in what’s the obvious Bruce Willis, mouthy wiseacre role.

It’s loosely derived from a forgettable 1980s TV action series about an elite group of ex-Vietnam vets, best remembered for starring the Mohawk ‘do-sporting tough guy, Mr. T, whose catchphrase was, “I pity the fool.”

Co-written and directed by Joe Carnahan (“Smokin’ Aces”), it opens with a brutal interrogation scene in Mexico and then immediately switches to a martial arts fight and then another gun battle scene and explosion, all before the opening credits run.

I was reminded of screenwriter William Goldman’s famous advice (in his 1983 book, “Adventures in the Screen Trade”) about eschewing lengthy exposition and starting a movie as far into the action as possible. “A-Team” certainly does that, but it never really bothers to back and fill with anything more than the broadest of outlines.

It does, however, skip around the globe to Mexico, Iraq, Germany and various U.S. locations. The main plot, such as it is, has something to do with recovering engraved plates for printing U.S. currency, and it simply barrels from one outrageously preposterous action sequence (a tank firing on drones while floating through the air attached to parachutes) to the next.

The lack of character development and coherent plot is a problem, one that Cooper, the movie’s ostensible lead, doesn’t have the requisite charisma to override. Or at least not here.

Given that he’s playing the wise-cracking, macho pretty boy (and even has a romantic subplot with Jessica Biel), it’s Cooper who really has to carry the movie. He struts around shirtless and flashes attitude, but there’s nothing backing it up.

He seems like a poor man’s Matthew McConaughey, who’s already as second-tier as you want to go.

“A-Team” doubtless will gross a bundle in the U.S. and even more overseas, just as “Transformers 2” and “G.I. Joe” and other movies of the same ilk have done. So there’s really no compelling argument for making a quality film, or bothering with plot and characters, when explosions and car crashes will suffice.

Except, I pity even the foolish studio executives who have to sit through this and pretend they’re proud of anything besides their bottom line.