In his breakout role, an Aussie hunk hurtles down a post-apocalyptic highway in a banged-up truck, with merciless motorbikes in hot pursuit …

* One of the most anticipated films of the year is an adaptation of a classic, visionary piece of sci-fi literature, largely because it’s the third film from an acclaimed, visionary director. But it struggles at the box office … 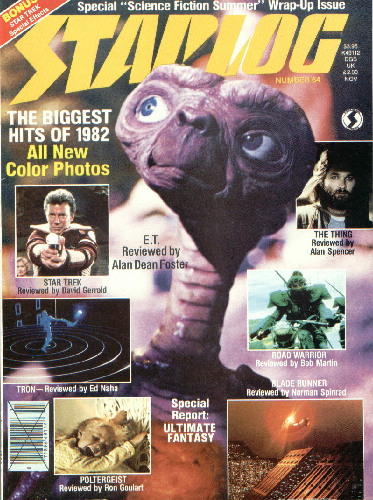 * After years as a tired TV and movie franchise, “Star Trek” gets a reboot and becomes a critical and commercial success, winning a new legion of fans …

* Aliens land on Earth, some proving funny and friendly to our young heroes while others just want to kick and kill ass in a welter of special effects …

* And in an effects breakthrough, a reluctant hero is sucked into a new, graphically-created universe where he gets a new lease on life via his avatar.

It sounds like a rundown of this year’s biggest genre flicks — but one look at this classic 1982 cover of Starlog magazine confirms that we’re losing out on quality while, proportionally, studios are spending far more to make far less.

Now, not all of the 1982 were hits. But the majority made their budgets back handsomely in the US alone, long before ancillary markets and home-entertainment retailing were considered the safety net.

And in the case of the two that didn’t, the difference between what was spent and recouped was proportionally much smaller than when today’s turkeys go to the slaughter.

But economics aside, all seven of these films are fondly recalled and revisited year in, year out. Most justify the use of the word “classic."

While this year has so far yielded “Star Trek” (every bit as fun as “The Wrath of Khan”), “Watchmen” (destined for reappraisal like “Blade Runner”) and “Drag Me to Hell” (a “Poltergeist”-style ghostride) and is yet to deliver on the much-hoped-for “Avatar” (the grandchild of "Tron"), it’s hard to think that “Terminator Salvation,” “Transformers: Revenge of te Fallen” or “G.I. Joe” will be regarded in, say, 2036, as anything but superficial showcases for by-then dated special effects.

Same goes for middle-of-the-road comic-fantasy genres like “Night at the Museum 2” and “Land of the Lost,” whose existence is first and foremost predicated on the digital ability to unleash fantastic creatures, rather than a comic need to tell a story.

As for the likes of “Friday the 13th” and “Last House on the Left,” at least the cheesiest offerings of 1982 — stuff like “Evilspeaks” (demons from the computer!), “The Incubus” (demons and Cassavetes!) and “Parasite” (Demi Moore and 3D slugs!) — weren’t reheated leftovers.

Of course, there are compensations in 2009. Littler kids in 1982 had to make do with “The Secret of NIMH” or the musical “Annie,” while these days they (and their lucky parents) get “Monsters vs. Aliens” and “Up.”

But for the discerning older fan, one who likes heart and soul with sci-fi that’s smart, horror that’s scary and action that’s thrilling, it’s hard not to think of 1982 as a magical year, the genre equivalent perhaps to that oft-invoked “Golden Year” of 1939.

And in terms of expenditure, profit, fanboy and critical satisfaction, the numbers tell their own story: