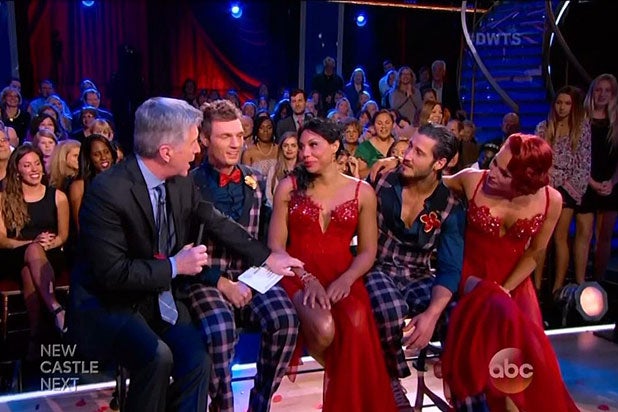 The drama on “Dancing With the Stars” was dominated by Tamar Braxton’s health crisis on Monday, which overshadowed some truly spectacular performances by the seven remaining couples.

At the opening of the show, host Tom Bergeron told viewers: “Tamar is not here, she was taken to the hospital today mid-way through dress rehearsal. This is very much a live show, we don’t have all the information at this time. She might return to dance live here, we will keep you posted as we find out.”

While she was absent from the first half of the show, the R&B singer was featured in video clips of rehearsals, which revealed what a busy week she had juggling co-hosting “The Real” with whirlwind trips to Las Vegas and Orlando, and a concert in Los Angeles on Friday. “It’s just non-stop,” she said.

“According to the rules, the judges are going to be critiquing a performance from today’s dress rehearsal,” Bergeron explained when it was her turn to dance.

“She came on the lot 15 minutes before we danced that, sick with pneumonia and exhausted. That’s been the schedule,” pro-partner Val Chmerkovskiy said after the video aired.

Surprisingly, Braxton did make it back later in the night to take part in the team challenge where the contestants had to perform to show-stopping routines from Broadway, Vegas and touring shows. Braxton, Chmerkovskiy, Nick  and Sharna Burgess performed a Cirque du Soleil number from the Beatles’ “Love,” and received a score of 27 out of 30 — meaning that despite her medical emergency, the Grammy-nominated singer is safe for another week.

If she had not shown up — like Kim Zolciak-Bierman before her — Braxton would have been ejected by the network’s lawyers, Bergeron explained.

After marveling about what drugs she’d been given, judge Carrie Ann Inaba told Braxton she was “astounded by her courage to come back.”

Ultimately, someone did have to go home — and it came down to married couple Alexa PenaVega and Carlos PenaVega in the bottom two, with Alexa and Mark Ballas getting the boot. “I wish it was me,” her supportive husband said.

As for the other hopefuls, after landing at the bottom of last week’s board by a whopping eight points, Army National Guard Specialist Alek Skarlatos was forced to take drastic measures. “I’m having a tough time being sexy — I am just not a sexy guy,” he admitted during rehearsals while being forced to both strip off his shirt and wax his chest.

Feeling the pressure after being put on a pedestal following a few flawless weeks, Bindi Irwin won praise for “taking risks” with a traditional Viennese waltz. “There were frightening things happening… it was gorgeous,” Julianne Hough gushed.

Nick led the board last week, but hip pain from his years of performing with the Backstreet Boys literally had him on the floor during rehearsals. Luckily the boy bander was feeling better by the time he had to perform live, and was cheered on by his bandmates.