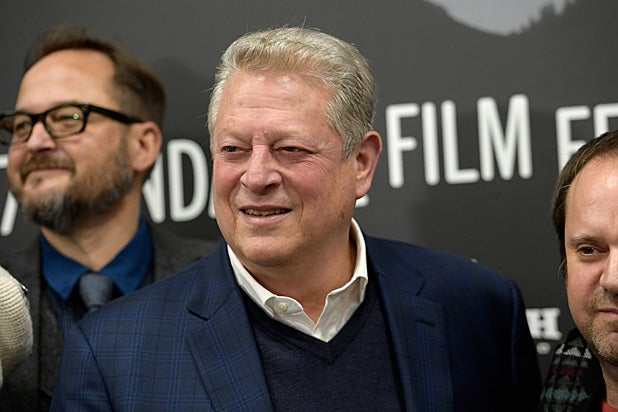 Donald Trump was thousands of miles away getting ready for a big party, but his presence hung heavy over the Eccles Theatre on opening night of the Sundance Film Festival on Thursday evening in Park City, Utah.
Sure, the man of the night was Al Gore, the former vice president turned climate-change crusader who was unveiling “An Inconvenient Truth: Truth to Power,” the sequel to Davis Guggenheim’s 2006 Oscar-winning film about Gore’s crusade, “An Inconvenient Truth.”
The new film, directed by Bonni Cohen and Jon Shenk, is focused on the efforts Gore has made in the last decade in the face of political opposition, right-wing media mockery and resistance from developing countries like India.
And the voice of Donald Trump pops up repeatedly, mocking President Obama for saying that climate change is the biggest problem facing America and threatening to throw out accords negotiated by previous administrations.
So for the film to premiere the night before Trump’s inauguration was a particularly fraught moment, and one that Gore hinted at in his post-screening comments.
“This movie gives me an extra burst of hope,” he said. “We’re going to win this. No one can stop it.”
He paused, “There is a question how quickly we can win it. Regrettably, damage has been done … But just remember that the will to act is itself a renewable resource.”
In many ways, the sequel was a tougher sell than the original 2006 film. The first time around, Gore sounded the alarm about climate change in a way that hadn’t been done in a mainstream film. “An Inconvenient Truth” had tremendous impact — it’s the tenth-highest-grossing documentary ever — despite the fact that it was essentially Gore’s slide show transferred to the big screen.
But the sequel by necessity had to take a different approach. A decade has passed, climate change is both an accepted fact and a political battleground, and dozens of films have explored the topic in variety of ways. One of the most recent was “Before the Flood,” which put the formidable ambassadorship of Leonardo DiCaprio centerstage in a sort of climate-change’s-greatest-hits presentation, but didn’t galvanize a mainstream audience the way DiCaprio and director Fisher Stevens no doubt would have liked.
But can a climate change doc truly be galvanizing in 2017? True believers are close to despair at the election of a president who has talked about withdrawing from the Paris Accords — there’s a palpable sense that we have now passed the point of no return, and that near-catastrophic changes are all but inevitable.
In the film, Gore said that his feelings during the fight to solve the climate crisis “swing between hope and despair.” So Thursday night’s premiere, given the timing, could easily have swung toward the latter and become a wake, a mass venting of anger, an occasion for dread.
But Gore himself refuses to dwell on the dark side, and Cohen and Shenk have made it a personal story of the man, more than another climate-change polemic.
The film visits Gore at home in Tennessee and goes with him to a shrinking glacier in Greenland, flooded streets in Miami and, most crucially, the 2015 UN climate summit, where he was instrumental in striking a deal with a recalcitrant India.
It doesn’t pack the punch of the original film, but it gives genuine insight into a man who is convinced this has become as issue of right and wrong. Maybe it won’t persuade the denizens of the alt-right, or even some hostile Republican congressmen, but it’s hard to imagine that most viewers inclined to see the film (and maybe a few dragged to see it against their will) will come out thinking of the man as a hero of sorts. And, of course, a few flashbacks to the Supreme Court decision that settled the 2000 presidential election can’t help but stir up another round of “what ifs.”
There’s a sadness in realizing that between the two “Inconvenient Truth” films, the urgency around the issue has only grown. But, Gore insisted at the end of the night, so has the sense of hope, despite the threat posed by you-know-who.
“Over the years, there have been a lot of people who have been climate-change deniers and changed their minds,” said Gore, who met with Trump shortly after the election but refused to talk about their conversation.
“Whether he changes his mind remains to be seen,” Gore added. “This story has many chapters yet to unfold … And it cannot be stopped by one man.”