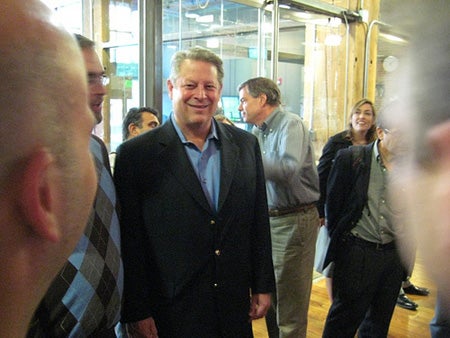 When Al Gore’s Current TV was launched in 2005, it was intended to be (and occasionally heralded as) a “new breed of television,” a revolutionary step in the democratization of the medium, a heady mix of crowdsourcing and traditional on-air journalism delivered in bite-sized chunks palatable to the Internet-sized attention spans of its target audience. Or something.

Case in point: on Wednesday, the San Francisco-based company announced a reorganization that will result in about 80 layoffs, according to Valleywag. What’s more they’re going to move away from short-form, bootstrapped programming to “proven 30-60 minute formats from a multitude of sources, including acquisitions, co-productions, outside studios, as well as Current developed and produced content.”

So much for being different.

What’s even weirder: Current says the layoffs were “not the result of a need to cut costs. Current Media will have its most profitable year. This financial stability will allow the company to re-allocate resources in order to put further emphasis on areas of the business believed to best position Current Media for continued long-term growth.”

All of which adds up to an admission that this "new breed of television" simply isn’t working. At least in the long-term.

To be sure, I’ve spent the better part of an hour trying to find Current TV’s current ratings. Have not been able to find anything, other than that it’s “in 59 million homes” in the U.S., U.K. and Italy.

Note: I asked Current to provide them, and will update this post accordingly.