Actor, director, playwright, songwriter, comedian — is there anything Alan Arkin can’t do? A veteran of classic films from the ‘60s and ‘70s like “The Russians Are Coming, The Russians Are Coming” and “The Heart Is a Lonely Hunter” (for which he got Oscar nominations) and “Catch-22, ” it wasn’t until 2006’s “Little Miss Sunshine” that Arkin got his Oscar.

In the early ‘60s, Arkin and a friend wrote “The Banana Boat Song,” which went on to become a smash hit for Harry Belafonte. A few years later, he co-founded Chicago’s famed Second City. This weekend he stars in “The Private Lives of Pippa Lee,” about a middle-aged woman who questions her past and present relationships. Arkin plays her husband, a successful New York City publisher who attempts to nurse her through her midlife crisis while suffering one of his own.

Here, he talks about getting older, winning the Oscar and telling Orson Welles to f– off. 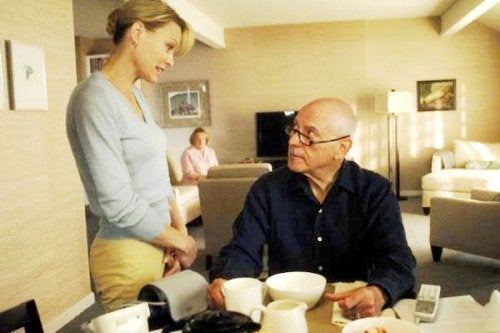 Do you know guys like your character in this movie?

A lot of them.

Did you go and talk to them for insight?
No, I leave that to Nick Nolte. Nick cracks me up. Love working with him, but he researches everything. He once had to play an actor. He spent two months researching, talking to actors to find out what it was like.

In the movie, you’re a lot older than your wife. What makes you feel old?
Standing up.

Really?
I feel fine. It just takes longer to stand up.

Do other people tell you you’re getting older?
There’s a great Joseph Campbell line. People said, after he retired, people said, “What does it feel like to be getting older?” He said, “I’m not old. I’m still 28 years old.” He said, “There’s just something wrong with my body!”

To me, that says the more love you have in your heart, the less laws you need because your love includes the needs of the people that you deal with.

Back in the ’60s you made your directorial debut Off Broadway with a play that gave Dustin Hoffman his big break. What did you see in him that led you to cast him?
I didn’t see anything, and I still don’t. I came into a cast that had already been cast. So I inherited the whole dance, and he was part of it.

What was he like to work with back then?
Pretty much like what you hear about him now.

Word is he can be difficult.
That’s what he was like then.

Can you talk about working with Orson Welles on “Catch-22”?
He was a complete pain in the ass. He came in and decided to run the set without bothering to learn his lines or know what he was doing. But he decided to run everybody else.

How did he respond to that?
He f—ed off. I was kind of irascible in those days.

How are you at suffering fools?
I’m not good with them. I need people with brains.

But isn’t foolishness a big part of the human condition in the arts?
It’s fine with me as long as there’s an acknowledgement that they are. But when someone’s spouting off that they’re wise — it’s just, like, it hurts me. It’s like a physical pain.

You had a better time working with Audrey Hepburn in “Wait Until Dark”?
I loved her. Everything that you liked to think about her, seeing her on screen, she was. Delightful, hard-working, funny, positive, she was royalty without any of the standoffishness of royalty. She was very accessible, an absolutely delightful person, and I was, well, unpleasant on the set. I hated doing those things to her.

And obviously she forgave you.
Yeah, I actually publicly apologized to her. They had a big thing at Lincoln Center about 20 years ago. I told her I’d acted that way because the part disturbed me so much. She said she didn’t even notice.

How rewarding was it accepting your Oscar for “Little Miss Sunshine”?
I wasn’t there. I left my body. Somebody else took its place, and somebody else experienced all the things. I was gone for about a week. I don’t know where I was. When I saw it about two weeks later, I said, “Jesus Christ, there’s 100 million people out there! It’s a nightmare!” So I was oblivious to the whole thing.