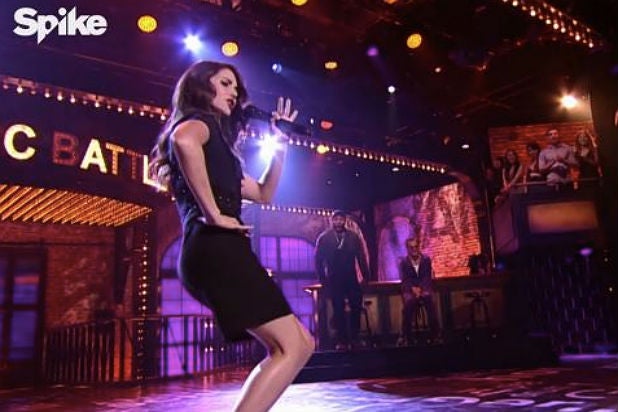 “Lip Sync Battle” returned after a mid-season hiatus on Thursday and pitted “Lego Movie” stars Will Arnett and Alison Brie against each other.

Batman and Unikitty went head-to-head for Jimmy Fallon’s favorite game that has been a huge hit for Spike since it premiered last April.

“Arrested Development” actor Arnett kicked off the night by asking the audience “Who Let the Dogs Out?” When host LL Cool J quizzed him on what makes a winning lip sync performance, he said that you obviously need to be a great dancer and that he “moves like a gazelle.”

Next up, “Community” actress Brie went back to the ’90s to “Shoop” like Salt-N-Pepa.

Arnett then returned to the film that united them both in the first place as he performed the Oscar-nominated song “Everything Is Awesome,” complete with full construction costume like Chris Pratt‘s character, Emmet.

“I think that was the final brick in her coffin,” he quipped about his rival.

Meanwhile, Brie responded with “Bang Bang” by Jesse J, Ariana Grande and Nicki Minaj, firing off a ’30s-style machine gun — and wearing pinstripes and a trilby hat — before putting a bullet in a poster of Arnett.

In the end, there can be only one — and that was Brie, who thanked Arnett for “sucking so much.”

Coming up on the series, which is inspired by a “Tonight Show” skit, are guests such as Justin Bieber and Deion Sanders.

See a preview video of upcoming guests below.