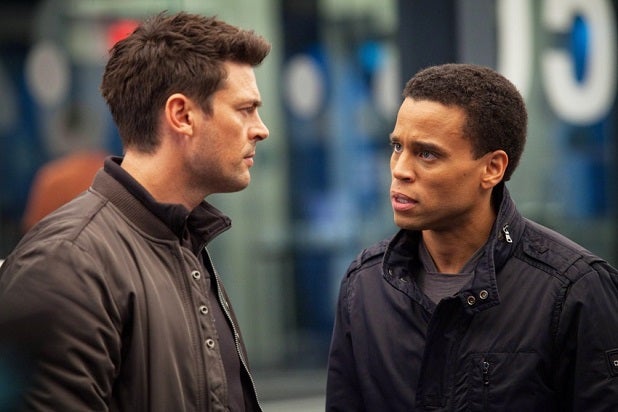 Fans of the Fox drama “Almost Human” — which was canceled Tuesday night after a single season — are mobilizing on the internet to vent their rage and attempt to revive the series.

Angry fans of creator J.H. Wyman‘s sci-fi series, which takes place in a world where human cops are paired with android partners, are expressing their anger at Fox en masse and pushing for the series to be picked up elsewhere.

“Firefly, Terra Nova and now Almost Human… Third well made sci-fi show in recent memory that they cancelled,” one fan groused on Facebook. “Just sell it to the sci fi [sic] channel, where it will run another three years…..”

“This is a great show it deserves to stay on the air,” another weighed in.

Twitter is also abuzz with protest, with Adweek reporter Anthony Crupi noting that “Almost Human” might not have pulled in killer ratings — its March finale hit a series low of a 1.5 rating/7 share in the advertiser-coveted demographic — it wasn’t at the bottom of the barrel, either.

He also tossed in a nod to “Almost Human” star Minka Kelly.

“Almost Human out-rated 30 of the other 39 new series introduced in 2013-14. Plus–and this is the crux of the matter–Minka Kelly seems nice,” Crupi wrote.

Meanwhile, a petition has been posted on Change.org asking the Syfy channel to pick up the series.

Noting that “Almost Human” provides fans with a world that “both scares and excites us,” the petition asks the cable outlet “to allow the series to become something great with the Syfy network.”

“Due to the recent announcement that FOX is canceling the sci-fi series, Almost Human, we, the viewers are asking to help save it. The series provides to its viewers an alternative, more, advanced world, which both scares and excites us. Karl Urban and Michael Ealy bring a charismatic atmosphere to the TV that we believe will gain as cult following as fellow cancelled series by FOX, Firefly,” the petition reads.

“The first season provided by FOX provides much promise for the series and intrigue, which leaves us wondering what is going to happen next. We connect with both characters: Michael’s, as an outcast, deemed as “different”, and Karl’s as someone who is searching for the truth, who is confused. We are asking that you see the potential for this series and to allow the series to become something great with the Syfy network.”

As of this writing, the petition has gathered 395 supporters, with 105 more required to launch the petition. (TheWrap has reached out to Syfy for comment.)